1.“It is not an uncommon experience to feel somehow changed after reading The Red Book.”

2.”The years … when I pursued the inner images were the most important time of my life. Everything else is to be derived from this.”

3.“You should carry the monastery in yourself. The desert is within you. The desert calls you and draws you back, and if you were fettered to the world of this time with iron, the call of the desert would break all chains. Truly; I prepare you for solitude.”

From the Prologue to The Red Book 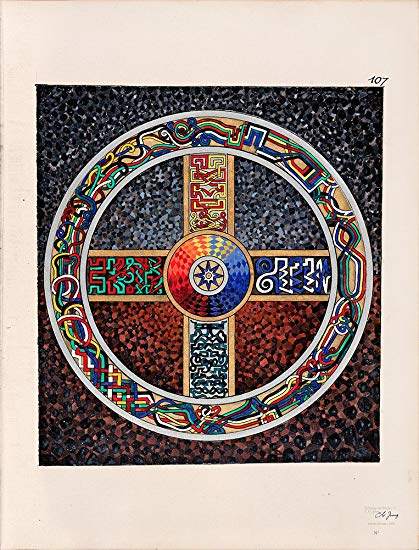 When I moved to Zurich in autumn of 2010 the first cultural event I attended was a newly-opened exhibition at the Museum Rietberg, which celebrated the groundbreaking moment in the history of depth psychology – the publication of Jung’s Liber Novus, commonly known as The Red Book. The book was created by Jung between 1915 and 1930. It is a misconception that he descended into madness or psychosis in order to write it. No doubt, for those who are sensitive to its vibrations, the book appears as a revelation from beyond. But it is important to remember that it was a fruit of Jung’s mysterious nocturnal activity. During the day, he continued to see patients, give lectures and even serve as an officer in the Swiss army.

In the Prologue to The Red Book Jung reflects on the nature of two spirits that have been moving his life – “the spirit of this time” and “the spirit of the depths.” The former is concerned with daily practicalities, conventions and being of use. The latter goes beyond the “belief in science” and teaches spiritual knowledge (gnosis) that goes beyond space and time, escaping the confines of daytime logic. One gets seized by the spirit of the depths, just like Jung’s soul was seized by eternal ideas. He confesses in the Prologue:

“I resisted recognizing that the everyday belongs to the image of the Godhead. I fled this thought, I hid myself behind the highest and coldest stars.”

Perhaps to protect his scientific reputation, Jung never decided to publish The Red Book in his lifetime. After his death in 1961 the manuscript was moved to a bank vault in Zurich, where it remained for decades. I have recently felt an enormous pull to study The Red Book in more detail. Though I have read it before, I feel like at this point in my life it will hopefully bring new revelations. In his wonderful interpretative guide to The Red Book, Sanford L. Drob made a very striking statement in the Introduction:

“While Jung raises many questions in Liber Novus, he answers few, as he tends to circle around the problems that concern him and try out various possibilities.”

It is so because Jung’s prose is moved by the spirit of the depths; it invites the reader to join the quest whose path leads within. This does not mean following Jung as a prophet. As Jung says in the Prologue:

“May each one seek out his own way. The way leads to mutual love in community.”

“Do you not know that you yourselves are the fertile acre which bears everything that avails you?”

“The way is within us, but not in Gods, nor in teachings, nor in laws. Within us is the way, the truth, and the life.”

Since the visual and the verbal aspect of Liber Novus are inseparable, another great source that I consulted while reacquainting myself with The Red Book was The Red Book Hours: Discovering C.G. Jung’s Art Mediums and Creative Process by Jill Mellick, who focuses on Jung’s lifelong dedication to visual arts. I realized how devoted Jung was to his creative process and how self-sufficient in his endeavor. Mellick reminds us:

“In the late Middle Ages, a team of specialists divided the intensive, prolonged labor required to illuminate a manuscript; a scribe wrote black minuscules; a rubricator designed and rendered majuscules; an illustrator painted designed majuscules, decorations, and images; and often a separate illuminator added the precious metals that gave the manuscript their name. Jung became his own scribe, rubricator, illustrator, and illuminator.”

Apparently, a master calligrapher could not believe that Jung has done the whole Red Book calligraphy single-handedly.

In her book Mellick also includes the account of Hugh Milstein, who was in charge of scanning the manuscript for publishing purposes. Here is how he recalls the experience:

The book was seeing oxygen for the first time in a long time. As it was opened, the pages started curling. While the curling has a scientific explanation – humidity and age – … the phenomenon was still uncanny: as though someone was turning the pages one by one.

You could sense what everyone was thinking: another dimension of human experience was happening. I could never quiet the thought that Jung himself was turning the pages. And who was I to say he wasn’t? But it’s at least accurate to say that the pages were moving independently. They were moving for whatever reason we care to think they were moving.

The pages had luminosity. When I was working directly with the book, I noticed how vibrantly the gold and greens were reflecting under the light!” 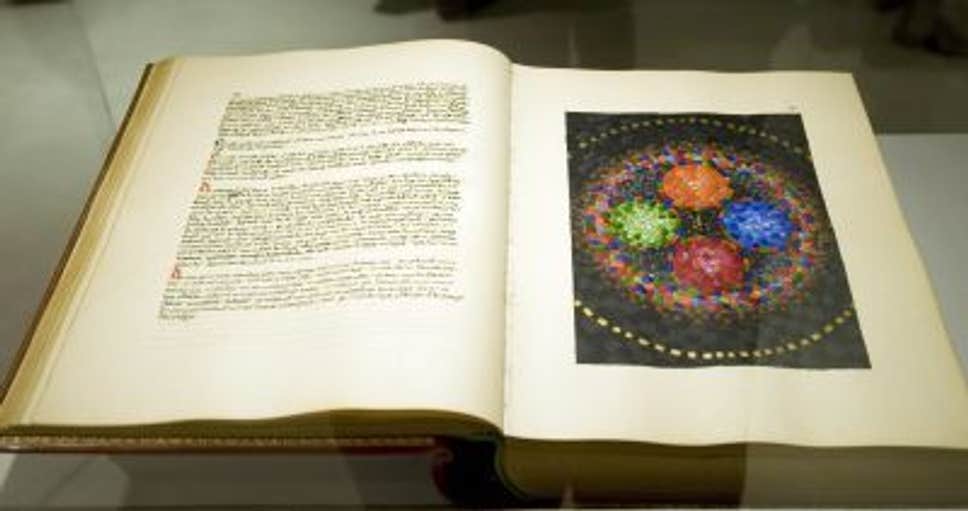 The Red Book – the original

The opening image of The Red Book

The opening image of Jung’s Prologue contains the first of his paintings – the letter D from “Der Weg des Kommenden” (“The Way of Things to Come”). It shows a small town by the lake and a typical church with a steeple. Sanford L. Drob muses:

“Mountains and fair weather clouds can be seen in the background, and an ancient or medieval sailing vessel drifts close to the shore. The masted vessel, which seems suitable for a lone adventurer, signals the beginning of a journey, one that will take Jung into the primitive depths and the astral heights. This scene, which is peaceful, indeed idyllic, in the center, has much that is troubling around its edges – a harbinger of things to come. Astrological objects and symbols range across the sky, and below there are strange, perhaps primitive, plants and corals in a dark lake. The staff of the letter “D” contains a flaming cauldron, and a serpent wearing a golden crown rises high above it.”

It is worth pointing out that the astrological glyphs refer to the phenomenon of precession and the dawning of the Age of Aquarius ( the last symbol in the sequence). I will come back to this in future instalments of the series.

In the introduction to Memories, Dreams, Reflections Jung wrote:

“What we are to our inward vision, and what man appears to be sub specie aeternitatis, can only be expressed by way of myth. Myth is more individual and expresses life more precisely than does science.”

Sanford L. Drob wonders about the accessibility of The Red Book and whether Jung’s “unique experience can be generalized to others.” Is it just a private, ultra-esoteric account, as some critics have stated, or is it in fact “an effort to engage the problem and paradox of comprehending the universal in the particular,” as Drob thinks. This question will be answered differently depending on whether you have heard “the call of the desert” or whether the writings of Jung have never captivated you.

14 Responses to Reading The Red Book (1)