Symbolism of the Wetlands

“I enter a swamp as a sacred place, a sanctum sanctorum. … My temple is the swamp.”

“Hope and the future for me are not in lawns and cultivated fields, not in towns and cities, but in the impervious and quaking swamps.”

Ancient Egyptians pictured the afterlife as a field of reeds, a fertile marsh with islands emerging from a sea of rushes similar to the ones in the Nile Delta. It is not hard to see why the Egyptians appreciated the primeval and eternal atmosphere of the marshes, “untouched by human history or labour.” (1) Swamps are ideal places of contemplation as well as mindfulness: on the one hand a lower level of oxygen creates a feeling of dizziness, on the other one wrong step could have fatal repercussions, not to mention the need to look out for various primeval monsters that are believed to be lurking in marshes.

Every summer the marshes of the Nile Delta were flooded thus returning the valley to the “form of primordial waters.” (2) In autumn a fertile field was revealed as a sign of a new beginning which was, however, fraught with “predatory forces of annihilation” such as alligators on the hunt. (3) The new beginnings are always vulnerable and slippery, for all their vitality and emergence. (4)

Marshes continue to play a vital purifying role for our environment, acting as a bulwark against flooding and being able to absorb more carbon dioxide than forests. And yet their destruction continues, as more land is required for agriculture and human settlements, including numerous cities.

As Rod Giblett puts it,

“Wetlands are maternal as they give birth to new life and nourish it. They are environmental waters of nourishing milk, their living waters are the breast of the great mother, the earth, and they are the moist womb that gives birth to new life. Wetlands are also maternal as they are the tomb for decaying and dying matter that gives rebirth to new life. Wetlands as womb are the source of life and wetlands as living waters are the first source of nourishment, the first object of love and the first object to be lost in modernization, colonization, drainage, and ‘progress.’ (5)

Map of Tenochtitlan – the Aztec wetland city on the grounds of which Mexico City was built, printed 1524 in Nuremberg, German; via Wikipedia

But the mother of all swamp cities, argues Giblett, is Paris. Its original name – Lutetia – goes back to the Celtic word “lutum” – mud. The coat of arms of the city of Paris contains the Latin motto, “Fluctuat nec mergitur,” i.e. “it floats but does not sink.” The goddess Lutetia personifies Paris as “the Great Goddess swamp mother.” The city is celebrated for its “interior labyrinths, dangerous depths, and fascinating passages.” (7) 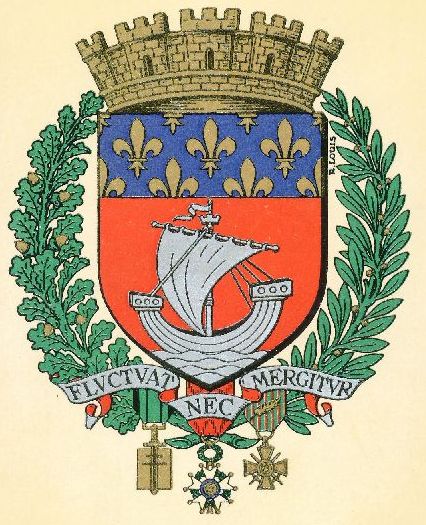 Coat of arms of the city of Paris

As more and more land was torn from the hands of the Great Mother of Swamps, the divine marsh of the goddess was reinterpreted as a slimy marsh and a dirty sewer. Unlike Ancient Egypt, modern cities wish to forget their marshy beginnings, relegating the swamp to the underworld.

Similarly to Paris, the name London derives from the Gaelic “lunnd” (marsh). The darkness of London, its “black heart,” is a well-known symbolic trope. In most cities, the fringes of respectable society are referred to as slums, the demi-monde, while these rejected, “liquid and horizontal” elements contrast with the “solid and vertical” crystal city. (8) Yet a seventh of the world population continues to dwell in this “urban nether world” amidst our “cities of light soaring toward heaven.” (9) 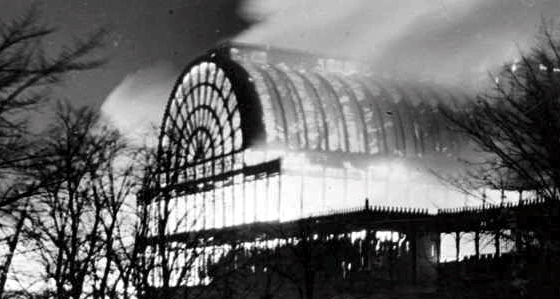 London’s Crystal Palace, symbol of the Industrial Revolution, was destroyed by fire in 1936

Venice is perhaps the most famous wetland city, mainly because its origins are still visible whereas the marshy cradle of Paris or London has been suppressed and is largely invisible. In Thomas Mann’s Death in Venice, a protagonist imagines a marshland landscape just before the city of Venice was founded as “a landscape, a tropical marshland, beneath a reeking sky, steaming, monstrous, rank— a kind of primeval wilderness- world of island, morasses and alluvial channels.” (10) There is symbolic ambivalence surrounding Venice, which has been described both as the holiest, the most sublime of cities on the one hand and the most sinful, hellish city on the other. This is because La Serenissima emerged from the marshes, which symbolize the unconscious with its dual nature of light and darkness, good and evil. The supernatural, the unconscious is palpable all over the place in this shimmering city built on water.

The chaos of the primordial mother goddess of the swamps was overcome by the “mathematized space” of New York with its skyscrapers and the precise grid plan. Yet urban legend has it that the sewers of New York are inhabited by crocodiles. (11) Symbolically, the crocodile, like the swamp, links the energies of renewal and dissolution. (12) It is a liminal creature, as it inhabits the intermediate realm between earth and water. It is symbolic of viciousness and destructiveness and also of fecundity by virtue of its association with mud and water.

A deceased woman prostrates herself before the deity Geb in the form of a crocodile, image found in “The Book of Symbols,” p. 201

New Orleans is another fascinating American city built on marshlands. Unlike New York, it does not appear to be mathematized but rather it continues to exhibit its “amorphous boundaries” between land and water. It was born out of the womb of the great American mother of all rivers – the Mississippi. New Orleans is a city where the boundaries between the dead and the living are very fluid. The chaos inherent in the liminal space between land and water erupted when the hurricane Katrina wreaked havoc in the area. (13) Similarly, the periodic flooding of Venice is a reminder that mother goddess is forever ready to reclaim what is hers.

Because they may seem inhospitable and dangerous, the marshes and swamplands are a well-known symbol of the unconscious. The Jungian analyst James Hollis wrote:

“…it is the swamplands of the soul, the savannas of suffering, that provide the context for the stimulation and the attainment of meaning.” (5)

The ego with its obsession of control desperately tries to “flee the swamplands.” (6) Yet serving the external authority figures, by being worker ants in our adult lives, we have no more energy left to serve the soul, which thus falls into swamplike “desuetude,” Hollis argues. (7) Successful lives are so often built on the horrors of doubt, disillusionment and terrors lurking in the swamplands of the soul. Compulsion replaces life.

Throughout our lives, argues Hollis, we are repeatedly pulled into psychological swamplands. No one is exempt, no matter how much psychotherapy he or she has undergone. It is not possible to permanently inhabit a castle somewhere on the moral high ground:

“The great rhythms of nature, of time and tide, of fate and destiny, and of our own psyche, move their powerful ways quite outside our will.” (8)

This melancholic underpinning, the swamp of our soul, creates its own music, full of suffering and dismay. In a myth, the nymph Syrinx was pursued by Pan and managed to flee him by being transformed into marsh reeds. When Pan sighed with dismay upon the reeds, they produces a plaintive sound, which gave him the idea of constructing the first panpipes. Thus music rose out of the marshlands.

(5) Rod Giblett, Cities and Wetlands: The Return of the Repressed in Nature and Culture, Bloomsbury Academic 2016, p. 13

12 Responses to Symbolism of the Wetlands