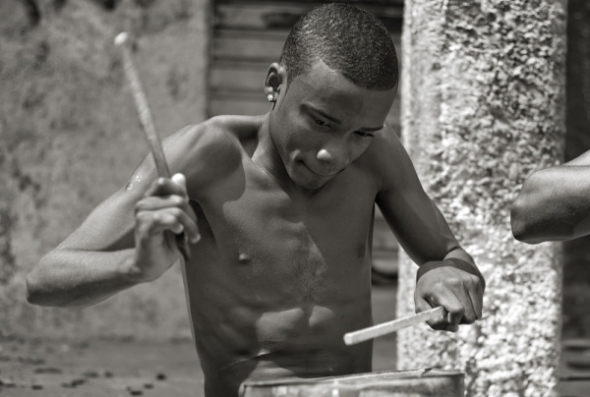 A Favela drummer, image via http://www.veezzle.com/photo/1141733/favela-drummer

I was reminded today of the opening scene of The Lord of the Rings. In it, Galadrielle says, ‘The world is changing. I feel it in the water, I feel it in the earth and I smell it in the air.’ I could sense it today. What inspired me was a poor man, in rags, whom I saw at my local railway station in Zurich, Switzerland. There are hardly any beggars in this country because they are neatly weeded out by the efficient, Virgoan law enforcers. But this man was not begging. The elegant crowd of commuters, each tapping away at their latest model of a smart phone, looked at this man, who was holding an old-fashioned tape recorder, blasting some rock and roll and moving his body rhythmically. He was happy and he did not need anybody’s spare change.

‘Maslow was so wrong,’ I thought to myself. The basic needs of a human being are not food and shelter. Our basic needs are much more soulful and our soul needs must and do always come first.

In a book Poor Economics. A Radical Rethinking of the Way to Fight Global Poverty, Esther Duflo and Abhijit Banerjee write about a poor Moroccan peasant who can hardly afford to feed his family. He says that a TV set, however, is an indispensable item in his household, more important than food. A TV may not be the most soulful object I could think of but it nevertheless ensures a deprived individual some kind of connection with the collective psyche. Maslow’s pyramid of needs suddenly appears irrelevant. Even the hungry or the destitute will seek to nourish their souls and transcend their existence. You cannot reduce an individual to his biological needs.

I was born in Poland, where there are still people who survived the second world war and its ordeals. The Angel of Hunger (this is the title if a magnificent novel about Soviet labour camps) lived in my land. I was particularly uplifted when I read about Otto Dov Kulka, a Holocaust survivor, who says that what kept him alive in the concentration camp was a children’s choir that he was engaged with. They were learning to perform Beethoven’s Ode to Joy in secret. This shows that pure biology, the naked instinct was not enough to survive the ordeal of labour camps. Human needs do not form a hierarchy but a complicated organic system where the instinctual and the symbolic are intertwined and equally important.

The change I hinted at in the introduction has to do with a growing global understanding that  the Bible quote ‘Man does not live by bread alone’ describes a pressing, basic and urgent human need of higher meaning.

This entry was posted in Uncategorized and tagged hierarchy of needs, Maslow, meaning, mysticism, psychology, spirituality. Bookmark the permalink.

18 Responses to What Maslow Surely Missed