The Eternal Charm of the Feminine

C.G. Jung, The Seven Sermons to the Dead

Gustave Moreau’s art strikes a deep chord with me. He captures my imagination like no other painter. It was the anniversary of his birth last Sunday so I decided to share a few reflections on his art. His beloved subject were beautiful and alluring women, the ones immortalized in myth and the Bible. In his paintings they are always larger than life, terrifying and awe-inspiring, tempting, mysterious, at the same time powerful and ethereal. The mystery of the eternal feminine must have haunted him all his life. He lived with his mother until her death while his girlfriend, whom he never married, lived nearby in a flat that he was paying for. It is not my intention to interpret his birth chart here but even a quick glance at it reveals quite a lot. No less than six planets in Aries, including the Sun, the Moon (in close conjunction with Pluto) and Venus, which is squared by the rebellious Uranus. It must have been hard being him, torn between the desire for absolute freedom and all the deepest yearnings, passions and anxieties, maybe even fear of the dark feminine, which I read into his Moon in conjunction with Pluto. Carl Jung, who also had his Moon close to Pluto, wrote about his mother:

From the door to my mother’s room came a frightening influence.  At night Mother was strange and mysterious.  One night I saw coming from her door a faintly luminous indefinite figure whose head detached itself from the neck and floated along in front of it, in the air like a little moon.

There is terror and mystery in these words. It also occurred to me that perhaps keeping his lover at a safe distance made it possible for Moreau to keep a divine spark in their relationship; that perhaps in this way he never ceased to see a goddess in her and was able to translate that feeling into his art. She could forever stay his anima and continue to be his divine inspiration, which was in danger of disappearing had they ever married and lived together. Here are a few Jung’s quotes on the anima, who I think is the ultimate theme of Moreau’s paintings:

…this inner feminine figure plays a typical, or archetypal, role in the unconscious of a man…  (p. 186)

At first it was the negative aspect of the anima that most impressed me. I felt a little awed by her. (p. 186)

… the insinuations of the anima, the mouthpiece of the unconscious, can utterly destroy a man. (p. 187)

But the anima has a positive aspect as well. It is she who communicates the images of the unconscious to the conscious mind… For decades I always turned to the anima when I felt that my emotional behavior was disturbed, and that something had been constellated in the unconscious. I would then ask the anima: “Now what are you up to? What do you see? …” After some resistance she regularly produced an image. As soon as the image was there, the unrest or the sense of oppression vanished. The whole energy of these emotions was transformed into interest in and curiosity about the image. (p. 187)

The anima of a man has a strongly historical character. As a personification of the unconscious she goes back into prehistory, and embodies the contents of the past. She provides the individual with those elements that he ought to know about his prehistory. … In comparison to her I have always felt myself to be a barbarian who really has no history – like a creature just sprung out of nothingness, with neither a past nor a future. (p. 286)

The negative anima bewitches, seduces, is mischievous, causes delusions and makes the man neglect reality. The positive anima is the man’s guide through the unconscious; he is his Ariadna leading him out of the dark. I think Moreau captured both the negative and the positive aspect of the anima archetype. Below is a gallery of some of his images of the feminine. In Bathsheba, who became King David’s wife after he seduced her and had her then husband killed, the most extraordinary thing is the sheer size of the female figure. He covets her and feels literally small and insignificant in her presence. She looks innocent and corrupt at the same time, carrying an enormous archetypal force, since archetypes are always composed of the dark and the light side. Embracing an archetype means accepting both its creative and destructive force. Moreau was supposed to have said that he did not believe what he could touch or see, but only in what he did not see and in what he could feel. This credo gave his art the strength of the inner vision. His paintings look like dream images and have a strong otherworldly aura. 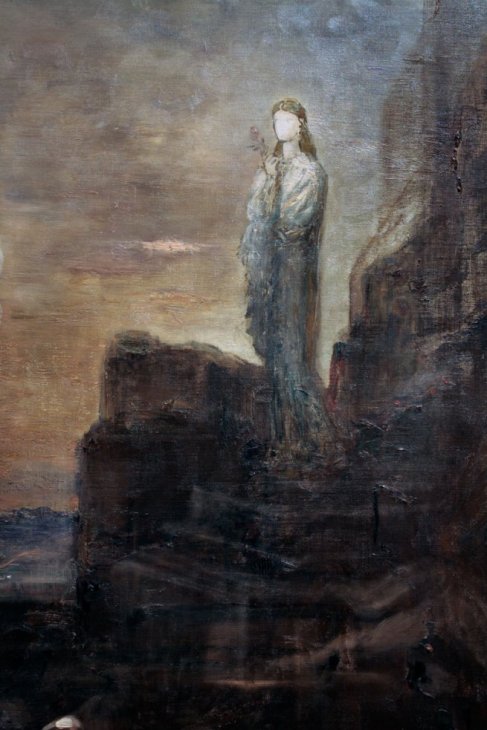 Helen on the walls of Troy 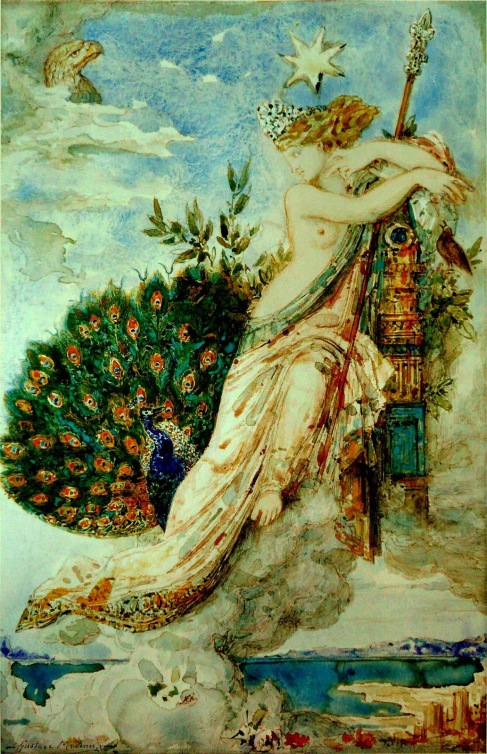 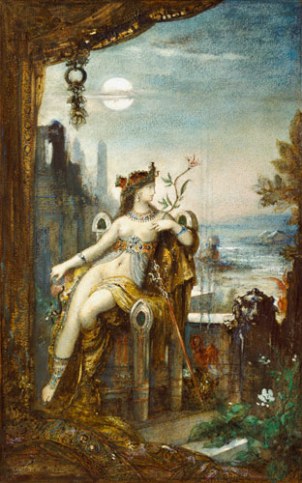 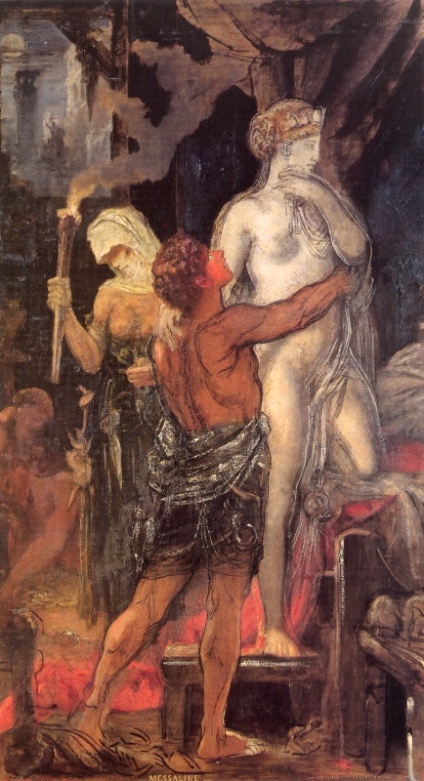 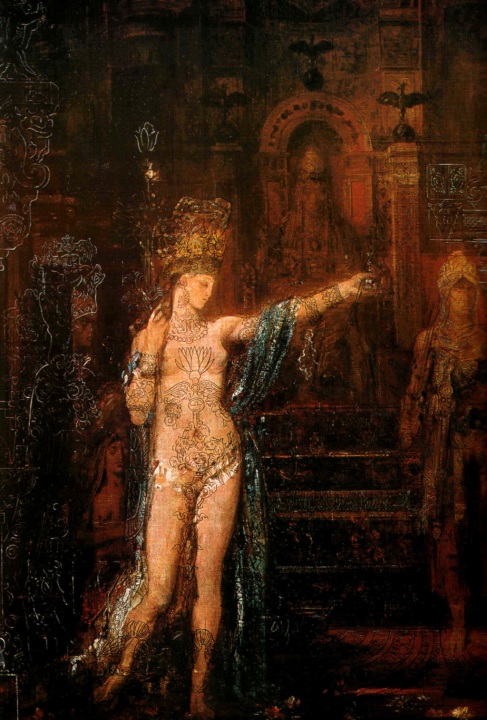 We continue to be mesmerized by the power of the anima archetype when we worship female actresses, the goddesses of the cinema. Marilyn Monroe personified the anima for countless men and in the end she was consumed by that archetype, while her personality dissolved and disappeared. She became a mere collective image. This process is beautifully described in Joyce Carol Oates’ masterpiece Blonde, which is a sort of a chronicle of the inner life of Marilyn Monroe. I found the book fascinating and I particularly remember one quote:

A lush-bodied girl in the prime of her physical beauty. In an ivory georgette-crepe sundress with a halter top that gathers her breasts up in soft undulating folds of the fabric. She’s standing with bare legs apart on a New York subway grating. Her blond head is thrown rapturously back as an updraft lifts her full, flaring skirt, exposing white cotton panties. White cotton! The ivory-crepe sundress is floating and filmy as magic. The dress is magic. Without the dress the girl would be female meat, raw and exposed. 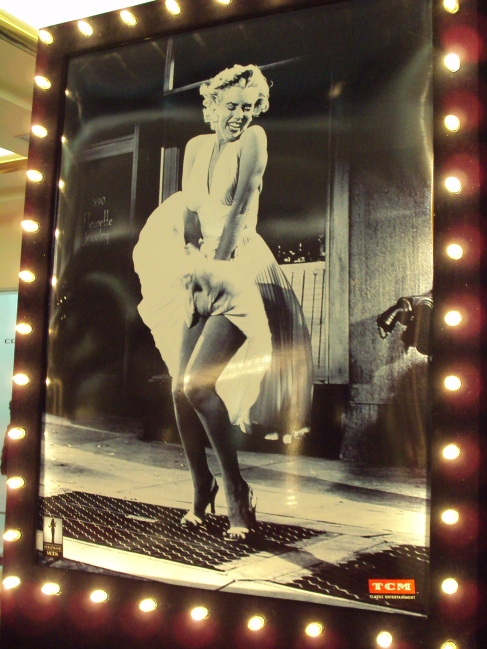 This is how a goddess was born and how the real woman died. She might have been saved had she become conscious of the danger of being swept by the collective forces. Personifying the goddess for millions of people came with a price. The essential thing, according to Jung, is to differentiate oneself  from these unconscious contents and bring them into relationship with consciousness. We are not gods or goddesses but gods and goddesses act through us with a considerable amount of autonomy. They are tremendous forces and are not to be toyed with. Simone de Beavoir, the first important feminist, insisted that the notion of the eternal feminine was a myth invented by men to trap women and deny them their individuality. I believe humans will forever continue to be trapped by the seductive charms of the anima and the more we do to make this archetype conscious, the more it will enrich our lives with meaning, beauty and mystery.

26 Responses to The Eternal Charm of the Feminine