In Heraclitus’ River: The Mystery of Time

In Heraclitus’ river
a fish loves a fish,
your eyes – says she – glitter like fishes in the sky,
I want to swim together with you to the common sea,
oh, most beautiful of the school of fish.

In Heraclitus’ river
a fish invented a fish beyond fish,
a fish kneels before a fish, a fish sings to a fish,
asks a fish for an easier swim.

In Heraclitus’ river
I, the sole fish, I, a fish apart
(say, from the fish tree and the fish stone)
at certain moments tend to write small fish
in silver scales so briefly,
that could it be the darkness is winking in embarrassment?

I. Swiss watch-ing: the precision of time

I love calendars, clocks, sundials, hourglasses, and I am really passionate about astronomical clocks. I compulsively need to know which phase the Moon is in. I am quite fond of train timetables, especially here in Switzerland, where everything runs invariably on time. The universe may be heading towards greater and greater chaos and entropy but here patterns of self-organization can only be compared to those observed in ant colonies.  The iconic design of the clock of Swiss Federal Railways was even copied without permission by Apple, who had to pay millions of dollars to Switzerland for this infringement. Just taking a walk through the centre of Zurich is like walking through a timepiece museum: you pass countless clocks, numerous watch retailers and last but not least, St Peter’s Church with the largest clock face in Europe. All of that is very much in sync with the Virgo archetype, which relates to precision, meticulousness and painstaking attention to detail. 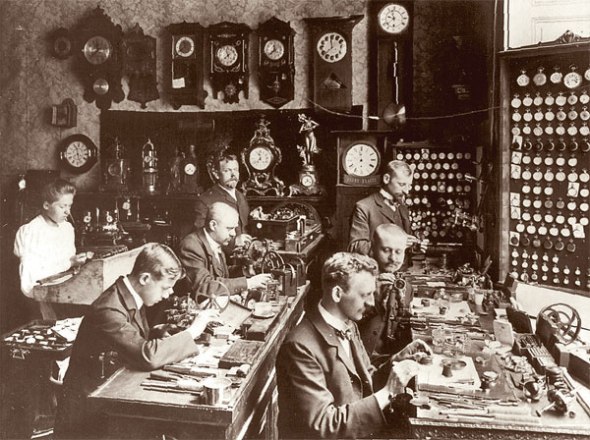 In my home country, Poland, which was quite short handed when the divine mind was distributing the Virgo archetype among nations, waiting for the rain often reminded me of the Yacek Yerka painting featured below. The painting is also a nice illustration of the concept of phenomenological or psychological time, which can be subjectively perceived as running fast or slow according to what we are doing. It is a very Taoist work, I believe, carrying a message that it is necessary to make yourself comfortable and nested in this moment of waiting instead of strutting and fretting in anticipation of the future. Eternal waiting seems to be one of the most important characteristics of human condition, which brings to mind Beckett’s Waiting for Godot, where living equals waiting for the absolute to reveal itself. “Nothing happens. Nobody comes, nobody goes. It’s awful,” despairs one of the characters. Instead of just living, we humans tend live in eternal expectation.

I find comfort in the knowledge that there is now temporal order and structure around me although I am aware that according to mystics and quantum physicists time as we know it is an illusion. The distinction between past, present and future is the most persistent illusion of all, according to Einstein. The past, present and future exist simultaneously in time-space. Also Carl Jung often repeated that the unconscious part of our psyche is not in time or space, which are both an illusion, since the unconscious has no time. Nevertheless, I obstinately feel I need to cling to my lifeboat of time, perhaps because I look too much in the eye of endlessness and eternity, meditating on symbols and archetypes on a daily basis.  I find matter and gravity comforting and I do not wish to escape the world of form. I have always been quite attached to Heraclitus’ metaphor of time as the ever-flowing, always changing river. I cherished an existential view of time as composed of unique moments, bites of here and now, whose tastes are unrepeatable. There was a hit song on a Polish radio, the lyrics of which were Szymborska’s poem:

I think time is both a flowing river and a frozen river and I have no difficulty withstanding that paradox. Once you start thinking in symbolic terms, you see that there is no longer either/or but it is always both. Like in the philosophy of the Tao, the words of Truth are always paradoxical. From a galactic, universal perspective, there is no time but from our earthly perspective time is very real and cannot be refuted. I saw a documentary last night entitled The Illusion of Time dedicated to time and quantum physics. At one point the presenter tried to demonstrate that according to the laws of physics time can be reversible and can even run backwards. A broken wine glass was shown to magically become whole again. This is all very well, I thought, a neat theory perhaps, but it has little to do with living here and now on the material plane, where we do not get to mend the past and by turning back the river of time. 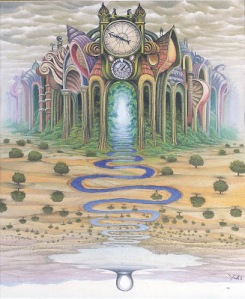 IV. Macbeth and the irreversibility of time

This irreversibility of time is for me the major theme of Shakespeare’s Macbeth. In the play, it is evident that there is no going back once certain tragic choices have been made, the merciless clock is ticking. The whole atmosphere of the play is very oppressive and very heavy, which is reflected in the famous monologue “Tomorrow, and tomorrow, and tomorrow.” I had to memorize this monologue because it shook me to the core when I first encountered it. The incredible three witches that tell Macbeth about his destiny to rise as king and then to fall down represent the agents of the higher self, who stand outside the temporal frame of now and who see the whole picture. Their famous line “fair is foul, foul is fair” has been interpreted as leading Macbeth to temptation, but in my humble opinion they are just an expression of the higher archetypal reality, where darkness and light coexist and form a union of opposites. The three witches represent the law of karma. They are like the Norns of Norse mythology, who rule the destiny of people. We cannot apply our earthly logic to these divine messengers.

Memory haunts Macbeth throughout the whole play and is one of the reasons of his demise. Time and memory are closely intertwined and interdependent. There is a magnificent novel dealing with memory and time, called A Sense of an Ending and written by Julian Barnes, who won Man Booker Prize for it in 2011. I cannot recommend it enough. I read it once with bated breath because the ultimate mystery is revealed only at the very end. After I finished I immediately started reading it again, but now with this unique ‘godly’ perspective, knowing how the fate of the characters had unfolded. In the book, I found an amazing quote on memory:

…there is objective time, but also subjective time, the kind you wear on the inside of your wrist, next to where the pulse lies. And this personal time, which is the true time is measured in your relationship to memory. 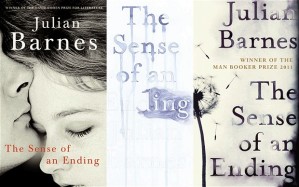 VI. In Search of the Lost Time

Certain details and images that appear persistently in the memory of the main character gain a totally new illumination through the novel’s ending. I encourage you to read this novel, and it is very short, unlike Proust’s In Search of the Lost Time, which I also love although I managed to read just four out of the total of seven hefty volumes. If you want an abridged version, you might want to read Alain de Botton’s delightful book How Proust Can Change Your Life. Did you know that the longest sentence in Proust’s novel presented in a standard-sized text measures about four meters? At the beginning the book was rejected by a number of publishers, one of whom remarked: “I fail to see why a chap needs thirty pages to describe how he tosses and turns in bed before falling asleep.” Proust’s brother remarked caustically: “The sad thing is that people have to be very ill or have broken a leg in order to have the opportunity to read In Search of Lost Time.” I still live in hope I will be able to finish it one day. The text of the novel is a stream of vivid, rich, intimate and very sensual memories. It is a lesson in observing, looking and taking in, being watchfully aware of the present. It is another paradox that by taking us on the journey to the past, Proust teaches us how to live fully in the present, savouring every moment, how to be sensitive and sensual. Proust teaches us also that remembering is not an intellectual process but an emotional and subconscious one. We might think we have forgotten someone but when we find an object that we associate with that person or when we smell something that we associate with a certain moment in the past, we are immediately caught in the web of memories, the heart pounding, tears in our eyes. In astrology memory is ruled by the Moon and the sign Cancer. Marcel Proust had four planets in this sign (including the Sun conjunct his Mercury) and they resided in the fourth house, which is archetypally connected with Cancer. This shows that he was the most fitting person to teach us about memory.

VII. Astrology and time in the Age of Aquarius

This post is getting too Proustian in length, and I would still like to add a few brief remarks about astrology and time. Astrology deals with the eternal, symbolic time of greater and smaller cycles. Time may be an arrow if we think conventionally but symbolically time is always a circle. The principle of eternal return symbolically governs all personal and global events. Celestial bodies do not cause anything to happen, they are present out there as symbols to be interpreted and which are linked to us on the earth by a golden thread of meaning. Astrology does only this: it shows the quality of the time when you were born and relates it to the quality of the time you currently live in. We are entering the age of Aquarius and Aquarius has a special connection with astrology, being its ruler. Its greatest gift is the ability to look at your life from a celestial perspective and see a unique significance of every single moment of your existence on this earth in this time.  I was particularly amazed when I heard in The Illusion of Time documentary I have already mentioned that at the time of the Big Bang the universe was highly ordered and as it progressed through time, entropy, chaos and disorder ensued. To my mind, astrology and symbolism are like a doorway to the original wholeness and meaning. By showing what was at the beginning, the source of all manifestation, they offer a glimpse of the order behind the seemingly chaotic and unbalanced energies governing our lives. 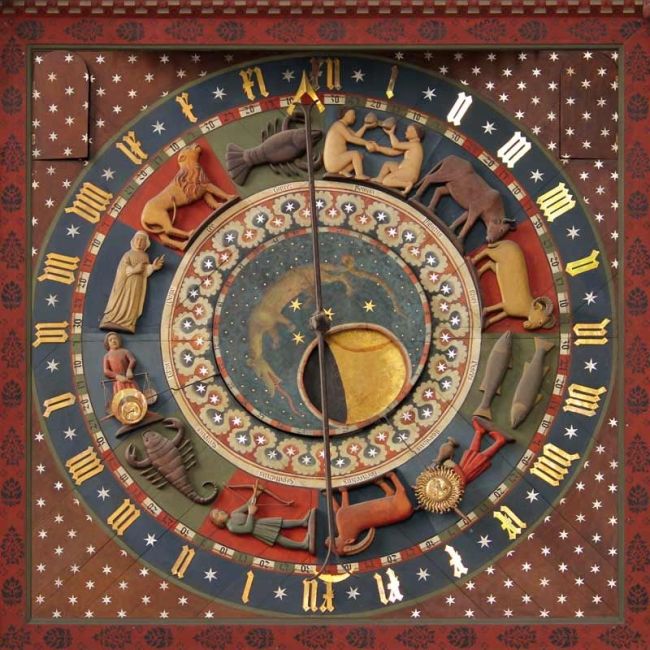 Detail from an astronomical clock in Gdansk, Poland (I used to live five minutes away from this outstanding piece)

35 Responses to In Heraclitus’ River: The Mystery of Time