A Tribute to Home

I am spending a few days in Krakow, Poland, where I was born and where I grew up. I am reminded of the myth of Antaeus, a Titan who renewed his strength by touching the earth. I have been feeling energized by this return to the source but at the same time I have also wondered why emigration was so easy for me and why I do not miss my home country while I am away, why I do not feel the celebrated feeling of nostalgia, described in so many poems of Polish immigrants. I am happy to return here regularly and to revisit favourite old haunts but I have come to realize that my longing for home is not connected with any particular country or any set of national symbols. And yet when I saw the following quote today, coming from one of my favourite books, which is Tess of the D’Urbervilles by Thomas Hardy, I was strangely touched and felt it to hold a lot of truth about what I am feeling:

All the while she wondered if any strange good thing might come of her being in her ancestral land; and some spirit within her rose automatically as the sap in the twigs. It was unexpected youth, surging up anew after its temporary check, and bringing with it hope, and the invincible instinct towards self-delight.

In his book Ignorance, Milan Kundera wrote: “The Greek word for “return” is nostos. Algos means “suffering.” So nostalgia is the suffering caused by an unappeased yearning to return.” I am not suffering being away from Poland. One of the reasons could be the strong pioneer/explorer archetype within me, who always wants to discover new lands and hungers for an adventure. On the other hand, I have long been aware that my yearning for home has more to do with particular people but also with the longing to become connected with my higher Self, which goes beyond culture or ethnicity. In astrology, the fourth house is related to one’s home, roots, what gives us a sense of security and how we want to be nurtured or how we nurture ourselves. I have the planet Neptune there, which on the one hand may mean always looking for an ideal home, but on the other hand it certainly means that I need to find my home deep within the quietest and the most distant part of my soul, which is unrelated to my current geographical location.

When Poland was partitioned and wiped off from the map of Europe and the country did not exist from 1795 until 1918, the national trauma was enormous. I think we the Poles all have this subconscious fear of being partitioned yet again and losing our home. Only twenty-one years after regaining our independence the second world war broke out, and the actions of Hitler and Stalin were dubbed the fourth partition of Poland. Healing the wounds and recovering the lost wholeness and unity is an important part of our national identity but for some people it is unfortunately a reason to be too nationalistic and too proud.

One thing I love about the Poles, though, is that we are born poets. There is a popular notion of the so called ‘Slavic soul’, which is supposedly very artistic, wild, untamed, emotionally explosive and never hiding emotions. It is something everybody has heard about, a very common knowledge without a hint of scientific corroboration. In my country, poetry has always been extremely important and celebrated and for a politically insignificant country that we are, we do have a fair number of world acclaimed poets and Nobel Laureates. My home city, Krakow, has always been a mecca for great poets. Our two Nobel Laureates in poetry, Wislawa Szymborska and Czeslaw Milosz,  lived here. I hope to show you with some photos how incredibly poetic and inspiring this city can be. Yesterday I noticed a poem inscripted on an old building. 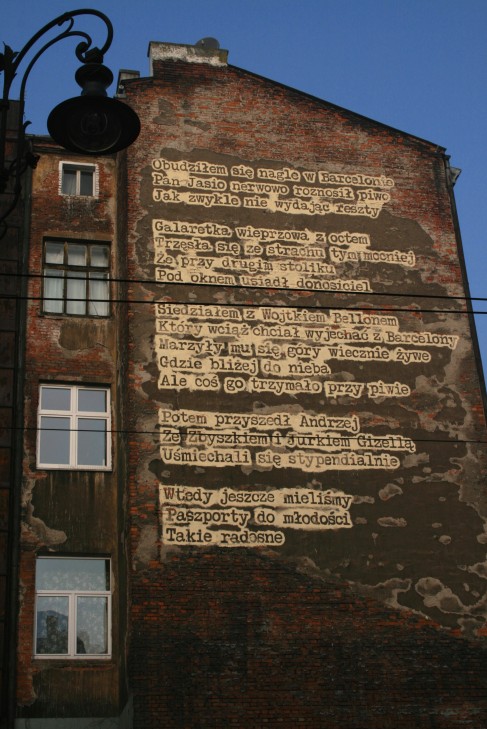 Krakow, a poem on a building, very nostalgic, speaking of the lost passports to joyful youth (via http://konteksthr.pl/adam-ziemianin-i-jego-poezja/)

Milosz wrote a very interesting thing about his understanding of what home is: “Language is the only homeland.” This makes me wonder a lot. Polish is my native language and when I am reading some beautiful phrases in Polish I often have a feeling they are ultimately untranslatable, being so deeply rooted in our culture and sensitivity. And yet, at the soul level, there are  no national languages and profound messages and meanings can be communicated between the lines and beyond words. A brilliant translator is able to capture the spirit of poetry and pass it on to the readers in another country. Also for me, as I am writing more and more in English, it does not feel unnatural any more not to write in my native tongue. I am trying to convey my intuitions, which, at the moment of their birth, are feelings or images, they are not born as words. In a sense I am also a translator from the language of my soul into the language of words.

I would like to round up for today with some images of the most soulful places in Krakow.

The medieval Wawel castle, which is believed to be one of the world’s main centers of spiritual energy. The Wawel chakra is said to be a place of power, one of the seven on the earth. An old Hindu legend says that God Shiva threw seven stones on seven directions in the Earth. It is said to guard the city and thanks to its powerful protection Krakow was not bombed during the second world war, unlike other Polish cities, which were completely destroyed. I definitely feel powerful energy standing there, in the corner of the western courtyard. There are always people meditating there or just leaning against the walls.(image via http://forum.powiat-piaseczynski.info/viewtopic.php?p=41676)

Kanonicza Street, the most beautiful street in the city, leading to the castle (image via http://www.zoover.com/poland/malopolskie/krakow/ulica-kanonicza/photos)

Inside the famous Alchemia, a bar in Kazimierz (via http://www.luxlux.pl/artykul/alchemia-na-krakowskim-kazimierzu-2307) 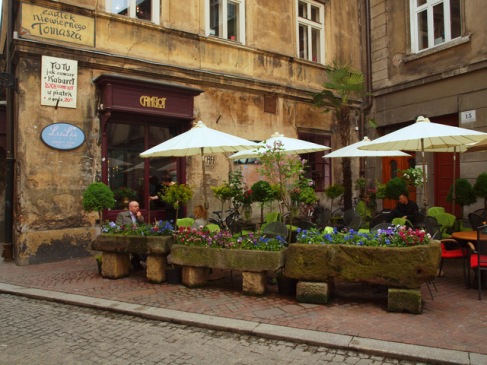 Doubting Thomas Corner with another famous bar (via http://kolumber.pl/photos/show/golist:144979/page:184) 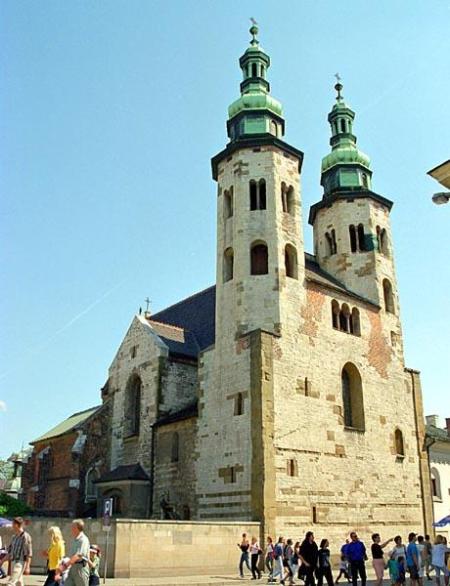 There are countless churches in Krakow, but this one (image via http://epokam.republika.pl/zasp.html) is my favourite, it is Romanesque, with extremely thick walls, looking quite sombre. What captivates me I guess is that inside it is completely different, Baroque with rich and sumptuous gilded decorations. It is shocking to see this contrast. Here is what it looks like inside: 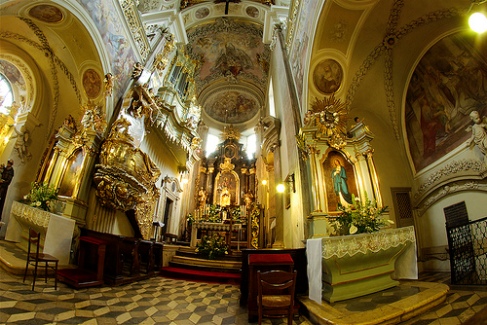 30 Responses to A Tribute to Home