The Ever-Fruitful Womb of Darkness

1.“As the Great Creatrix, the feminine is a vessel and passage for an alien, masculine Other that condescends towards her, enters into her, and favors her with the seed of living. Life originates in her and issues from her, and the light that appears projected on the night sky, which she is herself, is rooted in her depths. For she is not only the protomantis, the first and great Prophetess, but also she who gives birth to the Spirit-Light, which, like consciousness and the illumination that arises in transformation, is rooted in her creative efficacy. She is the creative Earth, which not only brings forth and swallows life, but as that which transforms also lets the dead thing be resurrected and leads the lower to the higher. All developments and transformations that lead from the simple and insignificant through all gradations of life to the complicated and intricately differentiated fall under her sovereignty.”
Erich Neumann, The Fear of the Feminine and Other Essays on Feminine Psychology

2. “Ceres as a goddess of death functions as the matrix which receives the dead for rebirth. The entrance to rebirth is through the womb. Thus Ceres as Mother, whose blood provides the nourishment for the fertilized egg and fetus, rules over the women’s blood transformation mysteries.”

Demetra George, Asteroid Goddesses: The Mythology, Psychology and Astrology of the Re-emerging Feminine 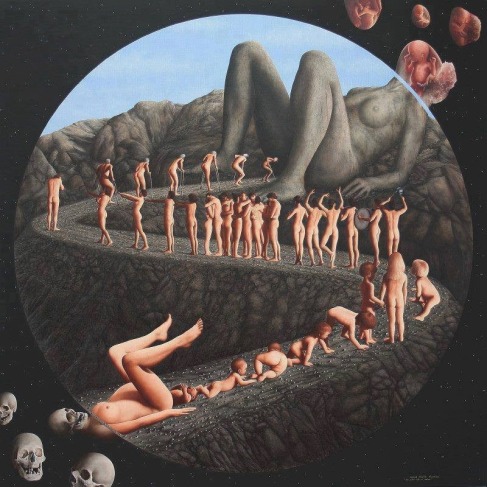 I hope nobody is offended by the artwork. As today’s full moon is in conjunction with my natal Moon in Taurus, I thought that this image beautifully captures the mystery of the Great Round. In The Red Book Jung wrote about “the ever-fruitful womb of darkness,“ which I think is a fitting catchphrase for today’s full moon.

This entry was posted in Quotations and tagged astrology, death, full moon in Taurus, goddess, rebirth, symbolism, symbols, the great round, womb. Bookmark the permalink.

17 Responses to The Ever-Fruitful Womb of Darkness