The Art of Resurrection

Today my thoughts were directed to the phenomenon of Greek “abaton”:

“Also called a mundus or earth-womb, the abaton was a real pit, standard equipment in a pagan temple. Those who entered it to ‘incubate,’ or to sleep overnight in magical imitation of the incubatory sleep in the womb, were thought to be visited by an ‘incubus’ or spirit who brought prophetic dreams. Novice priests went down into the pit for longer periods of incubation, pantomiming death, burial, and rebirth from the womb of Mother Earth. …

The Old Testament Joseph earned his oneiromantic talent by incubation in a Pit. The ‘brothers’ who put him there seem to have been fellow priests. He could interpret Pharaoh’s dreams only after he had submitted to the ritual. Assyrian priests derived similar powers from a sojourn in the Pit. They then assumed the priestly coat of many colors, signifying communion with the Goddess under her oneiromantic name of Nanshe, ‘Interpreter of Dreams.'”

Barbara G. Walker, “The Woman’s Encyclopedia of Myths and Secrets”

Incubation in the pit may be equaled to a “lesser death” while today we are celebrating the magic descent and rebirth through overcoming of even greater forces of darkness. I have been looking closely at painting of the Resurrection this morning and I came across this website with various depictions of the theme:

My attention was caught by a few wondrous paintings:

1.Nikolay Gay, “Harbingers of the Resurrection”

Sometimes, when the whole world is still in darkness but if we are attentive we notice a brightly shining harbinger of hope announcing the good news. In his magnificent poem “Patmos,” Friedrich Hölderlin (frequently quoted by C.G. Jung) wrote: “The god Is near, and hard to grasp. / But where there is danger, /A rescuing element grows as well.” 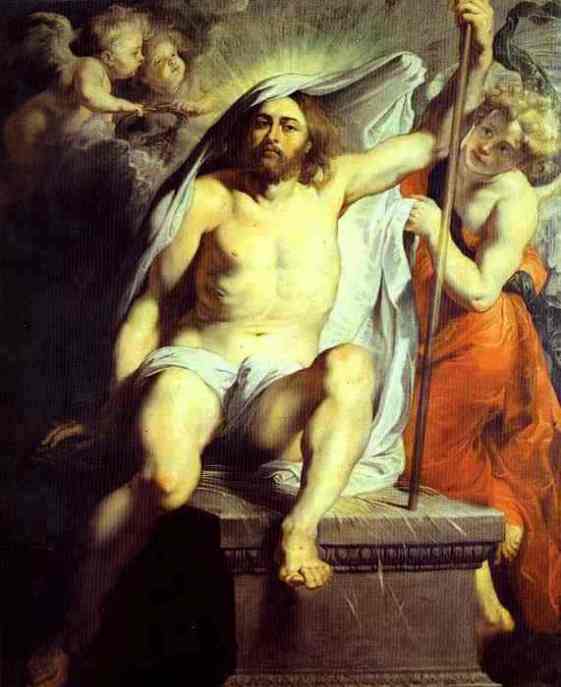 What I adore about this is the fleshiness of the body of Christ. There are no traces of death, no emaciation or death pallor. He is strong, powerful but also very human.

I find this painting breathtaking. Unlike Rubens, he focuses on the divinity of Christ and the sheer numinosity of the moment. There is an enormous out of this world quality about the scene. Rembrandt was a master painter of supernatural light.

4. Pieter Bruegel the Elder, “The Resurrection”

You can barely see Christ here hovering over the figure of the angel. Where do I start? Paintings bathed in gold have always been my favorite. I am fascinated also by the tumult among the people faced with this miracle.

5. William Blake, “Angels Rolling away the Stone from the Sepulchre”

This is another depiction of “the moment before.” I am especially enchanted by the composition.

This very modern image struck me particularly. On the one hand, I thought that it shows the inherent divinity in every human being. On the other hand, I thought of the suffering of the Holocaust victim although I am not sure whether the artist intended for such a reception.

15 Responses to The Art of Resurrection