I.“The chaos of the ancients; the Zoroastrian sacred fire, …; the Hermes-fire; …the lightning of Cybele; the burning torch of Apollo; the flame on the altar of Pan; the inextinguishable fire in the temple on the Acropolis, and in that of Vesta; the fire-flame of Pluto’s helm; the brilliant sparks on the hats of the Dioscuri, on the Gorgon head, the helm of Pallas, and the staff of Mercury; … the pentecostal fire-tongues; the burning bush of Moses; the pillar of fire of the Exodus, and the “burning lamp” of Abram; the eternal fire of the “bottomless pit”; the Delphic oracular vapors; the Sidereal light of the Rosicrucians; the AKASA of the Hindu adepts; the Astral light of Eliphas Levi; the nerve-aura and the fluid of the magnetists; … are but various names for many different manifestations, or effects of the same mysterious, all-pervading cause — the Greek Archeus, or [[Archaios]].“

and is, and will be everlasting fire,

the same for all, the cosmos,
made neither by god nor man,
replenishes in measure
as it burns away.“

III. A Philosophical Hymn to Hestia

“I sing of Hestia,
the most ancient of Goddesses,
the Fire in the Middle,
the Centre of the Cosmos,
the Centre of the Sphere,
the Prime Composite,
the All, the Source, the Good,
she who maintains order,
she who is the Essence of All Things,
The Goddess of Being,
She Who Abides,
she who alone stays at home in the dwellings of the immortals,
tending the central fire in the heaven of Olympus,
the intellect of the Earth,
the Source and Cause of All Being,
she who presides over the universe with a guardian power,
the fountain of Virtue,
she who fixes the firm seat of the Earth,
who stabilizes the poles,
a ruling power among the supercelestial Gods,
imparting permanence to All,
illuminating all things with stable and inflexible power,
she who contains an inflexible and undefiled permanency in herself,
she who is conjoined to the first causes,
she who is responsible for everything stable and immutable,
she who imparts order to the cosmos,
she who fixes the circulations of the heavenly spheres,
bringing an unshaken permanency to the centre of the Cosmos,
she who is the summit of all beings,
the monad of the whole,
she who imparts from herself to the Gods
an uninclining permanency,
a seat in themselves,
an indissoluble essence,
she who abides in herself,
possessing an undefiled purity,
the Essence of All,
the Cause of Impulsion,
she who subsists in the self,
she who embodies all gravitational forces,
the Ether in the Heart,
the Flame of Life,
She Who Creates, Preserves, and Regenerates the Universe,
she who is honored both first and last in all things,
All hail Hestia, the most ancient of Goddesses!”

Written by the author of this blog: https://paganreveries.wordpress.com/2012/05/19/hestia-the-queen-of-fire-part-three/

Among Greek Gods and Goddesses, Hestia (the Roman Vesta) was worshiped as first born and last born. She was the first daughter of Cronus (Saturn) and Rhea, the first to be swallowed by her father, and the last to be brought back to life. Hence, she can be viewed as both the primal and the final archetypal principle, much like the fire she was the guardian of. She never married, preserving forever her mystic purity; she never took part in any ceaseless conflicts of other gods and goddesses, as if she had deliberately removed herself from the vicissitudes of the temporal world to stand as a guardian to eternity. The temples of other deities were usually quadrangular, but Hestia’s was circular and covered with a dome, the circle being the symbol of unity and eternity that she stood for. In his Greek Myths, Robert Graves acknowledged her primordial quality when he wrote that the very first image of the Great Goddess was in fact non-representational but just “a heap of glowing charcoal, kept alive by a covering of white ash, … (which) formed the natural centre of family or clan gatherings.”

Reconstruction drawing of the temple of Vesta in the Roman Forum

The Greeks believed that the centre of their world lay in Delphi, where the Oracle was located. This was the navel of the world, where Hestia was worshiped along with Apollo and Poseidon. Her sacred fire was viewed as the burning hearth in the centre of the ancient Cosmos. Both in Greek and Roman homes and temples the sacred fire was tended religiously. According to Plutarch:

“And in case by any accident it should happen that this fire became extinct, … then, afterwards, in kindling this fire again, it was esteemed an impiety to light it from common sparks or flame, or from anything but the pure and unpolluted rays of the sun, which they usually effect by concave mirrors…”

In this way, Hestia connects the fire of the centre of our solar system with the fire burning in the centre of the Earth. Dionysus of Halicarnassus wrote this of the Roman goddess Vesta:

“And they regard the fire as consecrated to Vesta because that goddess, being the earth and occupying the central place in the universe, kindles the celestial fires from herself.”

Also Porphyry saw Hestia as a goddess of the earth, but he distinguished her from Rhea and Demeter in this way:

“The ruling principle of the power of earth is called Hestia, of whom a statue representing her as a virgin is usually set up on the hearth; but inasmuch as the power is productive, they symbolize her by the form of a woman with prominent breasts. The name Rhea they gave to the power of rocky and mountainous land, and Demeter to that of level and productive land. Demeter in other respects is the same as Rhea, but differs in the fact that she gives birth to Kore by Zeus, that is, she produces the shoot from the seeds of plants. And on this account her statue is crowned with ears of corn, and poppies are set round her as a symbol of productiveness.”

Hestia seems to symbolize the creative, enlivening spark in all nature, the undistinguishable spark of creativity in the very center of our soul, while Rhea and Demeter are connected with the manifest productivity of nature. Hestia presides over all ceremonies aiming at purification, centering on our soul with full devotion, reigniting the divine spark of creativity, preserving and creating the warmth of our personal sacred space, be it home, homeland, or the inner sanctuary of our soul. She calls us to center on our inner spark of divinity – the harmonious and unchanging part of our individual unique being. Tending to that fire brings us warmth, light, harmony and illumination.

Like every archetype, also this one has its darker aspect. It is connected with the ancient Rome and Vestal virgins, who may have enjoyed an elevated social status in comparison to average women, but who were cruelly punished for breaking the vows of chastity and also for letting the sacred fire be extinguished. The punishment consisted in the perpetrator being whipped and subsequently buried alive after a public ceremony (an echo of Vesta being the earth goddess). This is what may happen when archetypes are interpreted literally and not in symbolic terms. The virgin as an archetype is understood as a woman who is self-contained and one-in-herself, not chaste in sexual terms; the fire actually burning in the temple was just an external, profane representation of the archetypal sacred fire which can never be extinguished because it is tended by none other than Vesta, the guardian of the innermost things, as Cicero referred to her. 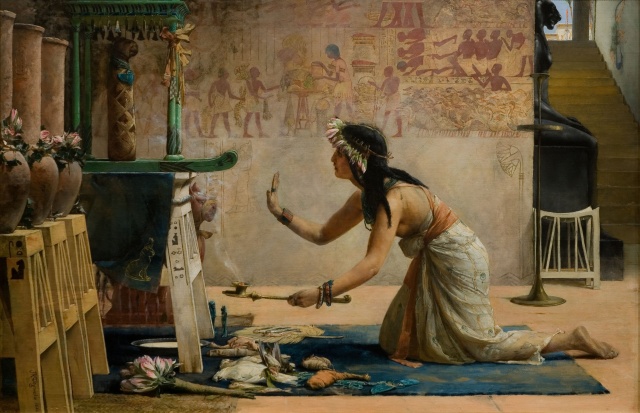 John Weguelin, “The Obsequies of an Egyptian Cat”

39 Responses to Vesta: Devoted Guardian of the Sacred Flame