On the Birth of Aphrodite

Gustave Moreau, “The Birth of Venus”

If our exact time of place and birth is like a lodestar to interpreting our qualities and our destiny, it must make a lot of sense to look closely at the birth of Venus and relate what we find to her archetypal significance. She has a most extraordinary birth tale, after all. At the beginning of time, the sky god Uranus and the earth goddess Gaia were locked in never ending lovemaking. Yet there was no happiness, for she was groaning under the oppression of constant pregnancies as Uranus chased all the offspring back into her womb. In desperation, she gave a white sickle to her son Kronos, who castrated his father and threw his testicles into the sea:

“Earth took into herself the bloody drops that rained down. Within a year she gave birth to the powerful Erinyes, the Furies. … From the immortal flesh that fell into the surging sea there arose in time a white froth, or aphros. Inside the foam was nurtured a lovely girl. First she floated toward holy Kythera, and then to Cyprus pounded by the sea. Out she stepped from the waves, a queenly beautiful goddess, and around her slender feet fresh grass sprouted.” (Martin)

“Circles formed on the surface of the water, and one of them was edged with white foam. From the middle rose Aphrodite, together with her first serving maids, Apate and Zelos, Deceit and Rivalry.” (Calasso)

Dissecting the myth, which Liz Greene is particularly good at, it is worth pointing out that Kronos is “not an independent masculine principle, but rather the masculine side of the generative principle over which the Mother presides.” He is associated with the yearly ritual of king sacrifice, whose purpose was to “fertilise the earth and renew the crops.” Right at the beginning, as it appears, the principle of Aphrodite/Venus and the principle of fertility go hand in hand. Other Venusian principles in plain sight would be: conflict, strife, violence, which eventually beget breathtaking beauty and harmony. Furthermore, Aphrodite seems to combine celestial and terrestrial aspects in her archetypal make-up: she has the Uranian disembodied, abstract aestheticism and perfection coupled with an equally strong chthonic, carnal and sensual aspect. By standing up against the father, the titan Kronos made a necessary step in his individuation process. When the principle of Venus is activated, families may get shattered, which will awaken the Furies (Erinyes). There is blood and suffering at the core of Beauty, it seems.

Odilon Redon, “The Birth of Venus”

As progeny of a primordial god, Aphrodite is older than the Olympians. She has enormous generative power at her disposal, and is a solar (the Golden One) rather than lunar deity. As Venus she competes in her brightness with the sun. Sworder remarks:

“…the phallus of the sky god is the sun and the saw toothed stone which Cronus takes to it is the jagged ridge of the western horizon, and the very moment of excision is that lovely moment as the sun sinks slowly out of sight beneath the world’s edge. Then the western sky is reddened by bloody member till in the midst of it appears the Evening Star.

For as star she is seen to stand above the sun after he has sunk beneath the western horizon, as she stands above him before he rises in the east.”

By the same token, Friedrich, quoted by Greene talks of her “sunlit sexuality” – she unashamed, usually portrayed nude, as opposed to other more modest goddesses. Her incarnation is fully blownl: she openly chooses mortal men as lovers, and does not punish their desires as Artemis or Hera did. Liz Greene quotes Paul Friedrich:

“The drives of sexuality are natural; on the other hand, sophisticated love-making is highly cultural. Aphrodite mediates between the two, ‘puts them together’. Or, better, she does not make them identical but interrelates them and makes them overlap to a high degree. To put it yet another way, we can agree that she is a ‘goddess of rapture’ but ought to recognise that this rapture harmoniously blends natural and cultural ingredients.”

William Blake Richmond, “Venus and Anchises”
“Yet in turn Aphrodite laughed at them and boasted of how she had driven gods to mate with women, but never herself had wanted a mortal’s bed. Zeus decided he’d change that. He filled Aphrodite with sweet longing for Anchises, who lived in the rugged uplands of Mt. Ida near Troy. He was a handsome young man with a common trade: herding cattle. One day she was sitting on Olympus, assured of her powers, smugly looking over the world, when she noticed him. That was all it took. Aphrodite instantly began to feel the pangs of desire for this unsuspecting youth. She hurried to Paphos and her temple there, filled with the scent of cypress. She gently closed the shining doors of the inner chamber and undressed, bathed luxuriantly, then clothed herself (with the help of the Graces) in a gown permeated with the most alluring perfumes. Then she rushed north toward Troy, striding high above the clouds, until she set herself down on Mt. Ida. The place was well known as “mother of beasts,” and as soon as she set foot there, they came out to greet her. Gray wolves that fawned at her feet, lions with glaring eyes, bears, leopards. Aphrodite was delighted seeing them, and by her very presence she infused them with the joyous urge to love. Two by two the animals went to lie and mate in the shadowy woods.”
Richard P. Martin

Uranian blood shedding finds its reflection in the two most typical Venusian symbols – the apple and the rose. They are united by the sensual symbolism of the color red. In this connection, Sworder offers his own take on the symbolism of the birth of Aphrodite:

“Red are our lips and nipples and our most private parts, reddest when closest to the consummation of love. Then they distend and bloom with the redness of blood. This is the blood shed by Cronus when he castrates his father Uranus and the phallus falls into the sea. The phallus is the sun which froths and colors the white cloud and the star of the goddess appear standing over its redness.”

Among its many significations, an apple seems to bring to mind the infamous “apple of discord.” Love can bring harmony and satisfaction of desire, but just as often it causes misery, jealousy, rivalry and all sorts of destructive passions. Roberto Calasso ingeniously links Aphrodite with Ananke – the goddess of necessity. While Ananke, together with Kronos, symbolizes the precision of karmic laws, with their austerity and relentlessness, Aphrodite seems to embody “a rebellion of lightness.” To quote Calasso with his uncanny precision:

“Olympus is a rebellion of lightness against the precision of the law, which at that time was referred to as pondus et mensura, “weight and measure.” A vain rebellion, but divine. Kronos’s chains become Hephaestus’s golden web. The gods know that the two imprisoning nets are the same; what has changed is the aesthetic appearance. And it is on this that life on Olympus is based. Of the two, they prefer to submit to Eros rather than Ananke, even though they know that Eros is just a dazzling cover for Ananke. And cover in the literal sense: Ananke’s inflexible bond, which tightens in a great circle around the world, is covered by a speckled belt, which we see in the sky as the Milky Way. But we can also see it, in perfect miniature, on the body of Aphrodite when the goddess wears her ‘many-hued, embroidered girdle in which all charms and spells reside: tenderness and desire are there, and softly whispered words, the seduction that has stolen the intellect even from those of sound mind.’ Unraveled across the darkness of the sky, that belt denotes not deceit but the splendor of the world. Worn by Aphrodite, the girdle becomes both splendor and deceit. But perhaps this was precisely what the Olympians wanted: that a soft, deceiving sash should cover the inflexible bond of necessity.”

Our Venusian encounters are sealed with fatedness. Lightness quickly and imperceptibly becomes heaviness. Consequences weigh on lovers with Ananke’s unforgiveness. 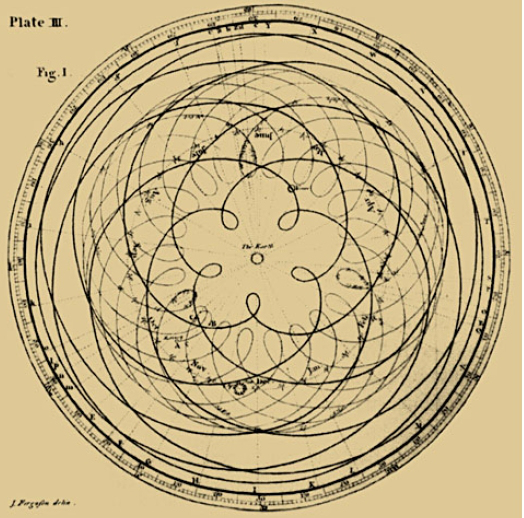 In astrological symbolism, Venus relates to the golden ratio – the measurable aspect of beauty. Nobody has expressed the beauty of the birth of Venus in a more outstanding fashion than Rilke in his poem “The Birth of Venus,” in Edward Snow’s translation:

“In the morning after that night which fearfully

has passed in outcry, tumult, uproar,—

the sea split open once again and screamed.

And as the scream slowly closed again

and from the sky’s pale light and brightness fell back into the mute fishes’ chasm—:

From first sun the hair-froth shimmered

on the wide curl of wave, on whose lip

As a blade of new green leaf stirs,

stretches, uncoils itself and slowly opens,

her body unfolded into cool sea-air

and into untouched early morning breeze.

and ducked into the cloud­ rims of the thighs;

the feet flexed and grew luminous,

And in the hips’ chalice lay the belly,

Within its navel’s narrow cup was all

the darkness that this bright life contained.

Beneath it the small wave rose lightly

and lapped continuously toward the loins,

where now and then there was a silent ripple.

But translucent and yet without shadow,

in perfect balance on the upright body,

and fell hesitantly in the long arms

and more swiftly in the hairs’ cascades.

Then very slowly the face went past:

And behind it the sharp closing of the chin.

Now, with the neck stretched like a ray of light,

of swans, when they are searching for the shore.

Then into this body’s dark dawning

In the vein-trees’ tenderest branches

a whispering arose, and the blood began

rushing louder over its deep places.

And this wind increased; now it plunged

and filled them and crowded into them,-

they drove the light girl toward the shore.

And thus the goddess landed.

as she strode swiftly on through the young shores,

all morning the flowers and the grasses

as from embracing. And she walked and ran.

But at noon, in the heaviest hour,

the sea rose up once more and threw

a dolphin on that selfsame spot.

Sandro Botticelli, “The Birth of Venus”

17 Responses to On the Birth of Aphrodite