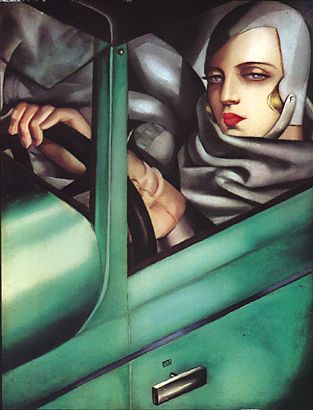 “Was it true that, according to her final wishes, the ashes of the Polish-Russian artist Tamara de Lempicka were dropped from a helicopter by her daughter Kizette into the crater of the Mexican volcano Popocatépetl? What an Olympian, cataclysmic, magnificent way for the woman to say goodbye to this world, a woman who, as her paintings testified, knew not only how to paint but how to enjoy herself, an artist whose fingers imparted an exalted and at the same time icy lasciviousness to these supple, slithering, rounded, opulent nudes who paraded before his eyes: Rhythm, La Belle Rafaela, Myrto, The Model, The Slave. His five favorites. Who said that art deco and eroticism were incompatible? In the 1920s and 1930s, this Polish-Russian woman with the tweezed eyebrows, burning, voracious eyes, sensual mouth, and crude hands populated her canvases with an intense lechery, icy only in appearance, because in the imagination and sensibility of an attentive spectator the sculptural immobility of the canvas disappeared and the figures became animated, intertwined, they assailed, caressed, united with, loved, and enjoyed one another with complete shamelessness. A beautiful, marvelous, exciting spectacle: those women portrayed or invented by Tamara de Lempicka in Paris, Milan, New York, Hollywood, and in her final seclusion in Cuernavaca. Inflated, fleshy, exuberant, elegant, they proudly displayed the triangular navels for which Tamara must have felt a particular predilection, as great as the one inspired by the abundant, succulent thighs of immodest aristocrats whom she stripped only to clothe them in lechery and carnal insolence. … He slowly turned the pages of the book, barely stopping at the mannered aristocratic men, with blue tubercular circles under their eyes, pausing at the splendid, languid female figures with shifting eyes, hair as flat as helmets, scarlet nails, upright breasts, majestic hips, who almost always seemed to be writhing like cats in heat.

He was ecstatic over these beautiful damsels decked out in low-cut, transparent dresses, gleaming jewels, all of them possessed by a profound desire that struggled to become manifest in their enormous eyes. ‘To go from art deco to abstraction, what madness, Tamara,’ he thought. Though even the abstract paintings of Tamara de Lempicka exuded a mysterious sensuality.” 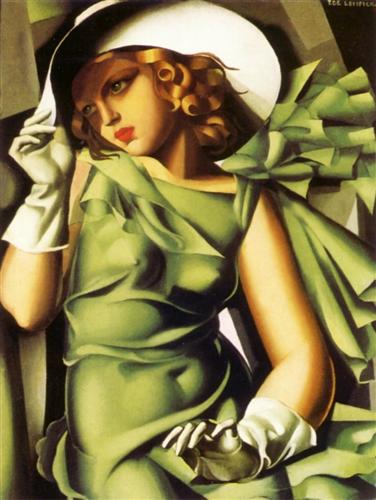