“Coronis was pregnant by Apollo when she found herself attracted to a stranger. He came from Arcadia, and his name was Ischys. A white crow watched over her. Apollo had told the bird to guard the woman he loved, ‘so that no one might violate her purity.’ The crow saw Coronis give herself to Ischys. So off it flew to Delphi and its master to tell the tale. It said it had discovered Coronis’s ‘secret doings.’ In his fury, Apollo threw down his plectrum. His laurel crown fell in the dust. Looking at the crow, his eyes were full of hatred, and the creature’s feathers turned black as pitch. Then Apollo asked his sister Artemis to go and kill Coronis, in Lacereia. Artemis’s arrow pierced the faithless woman’s breast. … Before dying, Coronis whispered to the god that he had killed his own son too. At which Apollo tried to save her. In vain. His medical skills were not up to it. But when the woman’s sweet-smelling body was stretched on a pyre high as a wall, the flames parted before the god’s grasping hand, and from the dead mother’s belly, safe and sound, he pulled out Asclepius, the healer.” 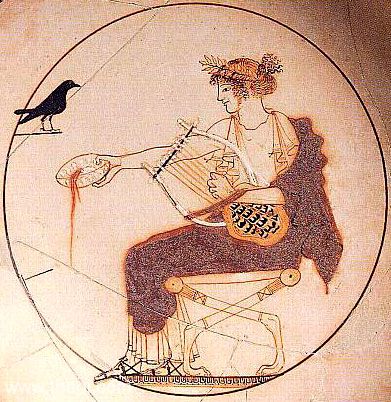 “When he promised to resuscitate the dead son of king Minos, Glaucus, Asclepius retreated into the woods in order to think about a cure. A snake wound itself around his staff; angered at being disturbed, he killed it, but then observed another snake bringing an herb and reviving its dead companion. He used the same herb to cure Glaucus, adopted the snake as his sacred animal, and made the staff with the snake his symbol.”

Fritz Graf, “Apollo (Gods and Heroes of the Ancient World)”

The rod of Asclepius

When grown up, Asclepius became the best physician that ever existed. Carried away by his success, however, he forgot the limits that Zeus had set to mortal men: he tried to resuscitate the dead. Zeus killed him with his lightning, restoring the cosmic order which Asclepius threatened.

Fritz Graf, “Apollo (Gods and Heroes of the Ancient World)”

Asclepius, a healer, a redeemer, a son who by his tender devotion atoned for his father’s haughtiness and hubris, may be the most sublime figure of the Greek pantheon. Similarly to Chiron, who raised him, Asclepius, the “unceasingly gentle”, bridged the gap between nature and culture, as Fritz Graf put it, by connecting the material world of the sense with the abstract world of the divine mind. Always accompanied by his daughters, most notable of whom were Hygeia and Panacea, he redeemed the feminine violated by his father and other prominent Olympian gods. Asclepian healing practice was very different from that administered by his formidable father. The healing granted by Apollo, the Averter of Evil, the Purger and Purifier, was swift, coming from afar, abstract, detached, and as sudden as a lightning bolt, since he was a god of healing and a god of punishment in equal measure. Apollo healed the plagues he sent. The followers of the path of Asclepius, however, relied heavily on ritual (incubation), honored the right time and place, and always paid homage to the earth goddess.

There are at least three different versions of Asclepius’ birth. In one of them recounted by Robert Graves, it was not Apollo who snatched the baby out of the funeral pyre, but Hermes. I find this tidbit quite appealing, because Asclepios seems to be a very Hermetic figure to me. He walked the earth with a staff in his hand (known today the rod of Asclepius), devoting his time to “praxis kai logos,” i.e. “treating with hands and by speaking magic words.” To describe the process, Meier quotes from the Emerald Tablet of Hermes Trismegistus: “He ascends to Heaven from earth, and again descends to earth, and is endowed with the strength of the Powers above and below”. Asclepius is in fact one of the prominent characters of Corpus Hermeticum, in which he makes an appearance as a devoted follower and disciple of Hermes Trismegistus himself. Hermes admonishes Asclepius to devote himself to the world rather than escape it by saying to him in Book IX that “sense and understanding both flow together in man, as they are entwined with each other. It is neither possible to understand without sense nor to sense without understanding.” Higher understanding must be rooted in the body – this is the essence of hermeticism. Furthermore, number three seems to be of special significance to Asclepius, as it is to Hermes. There are three myths related to his birth, there are three animals sacred to him – the snake, the cock and the dog. The cock, like Hermes, connects to the inherent duality of being as an animal that, as Tick puts it, “straddles yin and yang, darkness and light, day and night. It calls us to consciousness, crying at the break of dawn to awaken us from dreams.” It heralds the sunrise, and so did Asclepius derive his divine gifts from his father, the sun god. 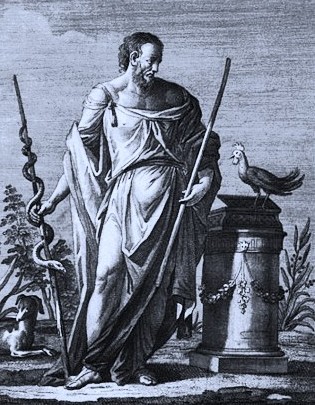 As a figure that united opposites – both god and human – Asclepius represents further dualities; for example, he was often portrayed both as a boy and as a mature man. He was born amidst fire and died being struck by a lightning bolt, but his life on earth revolved around sacred groves and springs, and was of a very earthy nature. After he was killed, thanks to his apotheosis he became associated with the constellation of Ophiuchus (the Serpent Bearer, the Snake Charmer). Furthermore, Ophiuchus was understood as “the fetus attached to the umbilicus cord”:

“Ophiuchus, from Greek Ophiukhos, literally ‘holding a serpent’, from Greek opis (or ophis), the Greek word for ‘serpent’, + Greek ekhein, ‘to hold, keep, have’. … there is a suggestion that there is a likely relationship between the Greek words ophis and *omphi-. [Omphi from the Indo-European root *nobh-. Related words ‘umbilicus’, ‘omphallus’, ‘navel’, ‘nave’, the hub of a wheel]. The constellation Ophiuchus is identified with Asclepius who was cut from his mother’s womb as a foetus. The long tube-like shape of a snake bears a resemblance to an umbilical cord. When the snake is curled up it might appear to be like the nave or hub of a wheel. [The womb is represented by Delphinus.] Ophiuchus was called Ciconia, the Stork, by the Arabian astronomers. They had depicted a stork in the place of Ophiuchus.” 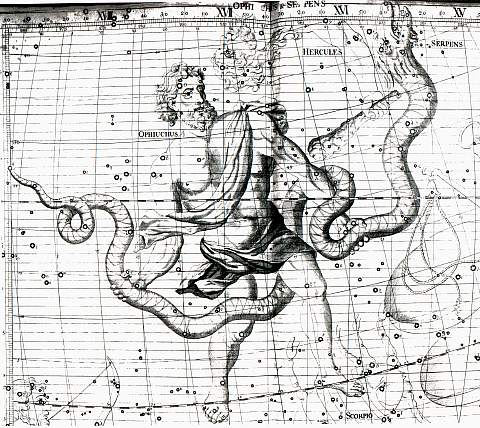 Asclepius entered and exited the world in an equally dramatic fashion, indicating his connection with liminal states, balancing between death and life, being exposed to the ultimate realities of existence symbolized by the divine fire.  Those who received a healing from him saw him as a kind, compassionate and gentle figure, like Chiron.  He was compared to both the sun and the moon: his wisdom was solar and paternal, his care and tenderness lunar and maternal. One of the versions of Asclepius’ origins has him as a pre-olympian primordial god of the earth, one of the “chthonioi” or spirits that lived in “the dark recesses of the earth.” As such a demon, he was not only a healer but also an oracle. The vestiges of this myth are visible in the choice of animals sacred to Asclepius: both the dog and the snake have an obvious affinity with the underworld. They are conjoined symbolically in the mythological figure of the hydra which was both the snake and the hound. A large number of underground monsters such as the Erinyes, the Gorgon or Cerberus shared the characteristics of both animals. Further, both the serpent and the dog, as guardians of inner treasure, connect to the underworld and the souls of the dead, the dog being their guide, while the snake being symbolic of death and rebirth. After Medusa was slain, her blood was divided between Athena and Asclepius. It was believed that the blood from her right vein cured, and from the left killed. Any healing work requires a careful and loving unification of opposites. Both the name Medusa and the word ‘medicine’ come from the same Greek root word med– which means ‘to devise, to use powerful means, to consider, judge, estimate and measure.’ It was Apollo who called for moderation in everything at his Delphic oracle; with excess any remedy could turn into poison.

The snake as a healing symbol has a long-standing tradition. In his essay “The Snake is Not a Symbol,” included in his book Animal Presences, James Hillman provides a summary of twelve meanings of the snake, some of which are:

1.The snake is renewal and rebirth, because it sheds its skin.

It is worth pointing out that all chthonic gods had a strong connection to phallic energies perceived as regenerative and procreative. 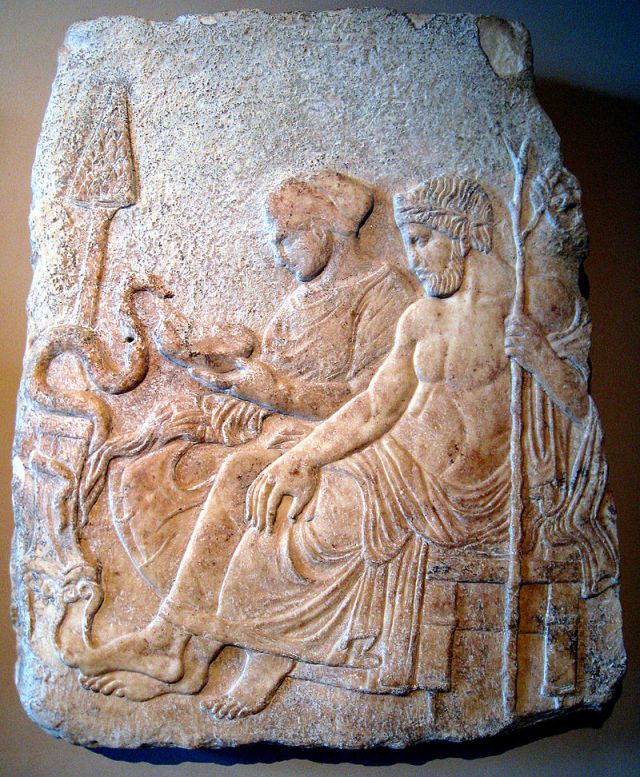 How was healing effectuated in the Asclepeion, i.e. a healing temple of Asclepius? In the most famous sanctuary at Epidaurus, built in the valley below Apollo’s shrine, harmless snakes and dogs accompanied the sick throughout all healing rituals. Other outstanding features were the ubiquity of water (supposedly flowing through a sacred labyrinth) and musical performances. The central healing ritual was incubation, which can be likened to a dream questing. As Meier points out, for Greeks dreams were not figments of imagination but “something that really happened.” They were perceived as stimulating the natural “soothsaying of the psyche.” Symptoms were always viewed as external expressions of the deeper underlying reality of the psyche. In other words, the correspondence (synchronicity) between body and mind, the outer and inner world, is what constituted every symptom. While incubating, the sick person slept in the abaton, lying on a klinē, from which our modern word “clinic” is derived. The abaton or adyton was, as Meier describes, a “place not to be entered unbidden.” It was the holiest part of the temple. Scholars conjecture that it was supposed to be entered only by those who were invited or called to do so. The ritual of incubation was very much an initiation into a mystery, a crossing over to the higher dimension of being. In a similar fashion, the healing sanctuary of Isis in Tithorea, Greece, could not have been entered by those not invited by the goddess in a dream. Coming uninvited incurred a harsh punishment. The rite of incubation brought about healing on many levels. The participants were encouraged to wear white garments that symbolized purity and receptivity of the soul, its return to the original innocence. Before approaching such sacred powers, the daily mind had to be silenced, the body cleansed, senses purified. Meier adds that the rite also “healed people of bad fate or destiny.” Asclepius himself appeared in a dream or a vision, touched the sick organ, thus healing it.

The Orphic hymn to Asclepius calls him mighty and soothing, one that “charms away the pain.” He, like the earth goddess Demeter, was invoked as “a blessed spirit of joyful growth.” Interestingly, Demeter was also regarded as a healing goddess that was accompanied by serpents. Meier says that the Demeter-Persephone mysteries of Eleusis featured Asclepius as its prominent deity ever since he himself was initiated into the Mysteries. Like most secrets of Eleusinian mysteries, the intricacies of the healing that occurred under the cover of the night at an Asclepian sanctuary will forever remain veiled to our daytime understanding. The work of healing incubation was highly individualized and case sensitive. Each case was treated as different and unique, because “the waking have one world and a common one, but when asleep everyone turns away from it into their own world,” as Heraclitus wrote in the famous fragment 89.