In the Crystalline Maze: Symbolism of the Mirror

The magic of mirrors and their tremendous mystic powers cannot be doubted. The soul’s primal instinct is to seek unity in love. We project our Selves onto the world and onto others in an attempt to see our own soul reflected. With the same captivation we look at our own photographs, always seeking confirmation of our existence. The soul cannot know its essence if it does not find a mirror it can gaze into in order to divine its own nature. 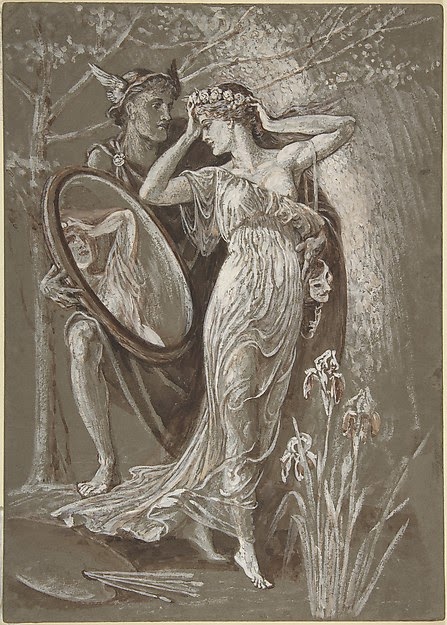 Walter Crane, “The Mirror of Venus”

An Ankh-shaped mirror case (via Wikipedia)

In ancient China, mirrors were buried with the dead as ritual objects which allowed the deceased to communicate with the divine world beyond. They were supposed to bring the dead in harmony with the universe and remind them that their soul reflects the light of the sun that shines eternally. In Egypt, the word ankh was also the word for mirror. The mirror, sacred to the goddess Hathor, was not treated as a passive object but it was called “a living one.” Researcher Lesley Jackson wrote that Egyptian mirrors were labelled “one who sees like Re” and “one who sees the face.” In both cultures mirrors were believed to be connected with divination derived from the wisdom reflected from the higher realms. Especially in the Middle Ages, the mirror was feared as an instrument of the devil, who may have used it to convey the knowledge of evil.

Though we take them for granted nowadays, mirrors which show a clear, undistorted image are a relatively new invention. In the times of yore, humans used to seek their reflection in still water, polished obsidian, brass or metal. The images thus obtained could not have been very clear. Flat glass mirrors as we know them today are a relatively late invention. In the sixteenth century, they were manufactured as exorbitantly expensive luxuries in Venice, a city whose beauty is magnified and reflected by the silvery surfaces of her waters.  Psychoanalysis speaks of the so called “mirror stage” of a child’s life involves their ability to view oneself as an object, which occurs between 15 to 18 months of age. By analogy, in the infant years of humanity, before clear and universally available mirrors were invented, we swam in the imaginative waters of participation mystique, when subject and object were not clearly differentiated, and we were tied by instinct to the symbolic order. A similar idea is found in a traditional Chinese mythical story retold by Borges under the title Fauna of Mirrors. The story goes back to the times of the legendary Yellow Emperor:

“In those days the world of mirrors and the world of men were not, as they are now, cut off from each other. They were, besides, quite different; neither beings nor colours nor shapes were the same. Both kingdoms, the specular and the human, lived in harmony; you could come and go through mirrors. One night the mirror people invaded the earth. Their power was great, but at the end of bloody warfare the magic arts of the Yellow Emperor prevailed. He repulsed the invaders, imprisoned them in their mirrors, and forced on them the task of repeating, as though in a kind of dream, all the actions of men. He stripped them of their power and of their forms and reduced them to mere slavish reflections. Nonetheless, a day will come when the magic spell will be shaken off.

The first to awaken will be the Fish. Deep in the mirror we will perceive a very faint line and the colour of this line will be like no other colour. Later on, other shapes will begin to stir. Little by little they will differ from us; little by little they will not imitate us. They will break through the barriers of glass or metal and this time will not be defeated. Side by side with these mirror creatures, the creatures of water will join the battle.”

The imaginary world of beyond invading the waking world is what may happen to anybody who chooses to gaze for too long into a mirror.

In the philosophy of Plato, humans were portrayed as cut off from “the world behind the mirror.” The main idea of Plato was that our world is a mere reflection of the luminous reality of eternal ideas. We are imprisoned in a cave, taking the shadows on the wall for reality, while the real source of light (the spiritual Sun) is hidden from us. Neoplatonists such as Plotinus compared matter to a mirror that reflects the images projected by the Universal Soul. What we perceive as material reality is nothing else but a reflection of the generative spiritual matrix emanating all forms of being from itself. The scholar Sergius Kodera devoted one of his books to the Neoplatonism of the Renaissance, which described the embodiment of the soul precisely in terms of reflection in a mirror:

“In the Neoplatonic tradition, this embodiment of the soul is described in terms of reflection in a mirror. In most instances, Ficino describes the descent of soul into the corporeal world as a disastrous event that imprisons a spiritual being into a body and thus diverts soul from its proper goal, which is intellectual contemplation.”

Kodera goes on to quote Ficino directly: “Only our soul, I say, is so captivated by the charms of corporeal beauty that it neglects its own beauty, and forgetting itself, runs after the beauty of the body, which is a mere shadow of its own beauty.” However, Kodera expresses an objection to the idea that the soul be imprisoned in matter. He goes as far as suggest that the myth of Narcissus, which must be mentioned in any discussion of symbolism of the mirror, was wrongly interpreted by the Renaissance Neoplatonists, notably by Marsilio Ficino. I must say I find his views on the matter quite captivating:

“Amazingly to the modern reader, Ficino … maintains that Narcissus does not look at his own face, but sees something different in the unstable reflection of the water — a beauty that is only a shadow. Narcissus is thus not an emblem for conscious self-love, but rather an allegory for soul that falls victim to the deceiving powers of a mirror. The surface in the pond is tied to a negative description of the physical world and the mirror image in the pond serves as an allegory for soul’s calamitous descent into body. Ficino’s reading was not uncommon, for the myth of Narcissus was highly popular throughout Antiquity and during the Middle Ages when it was linked to the soul’s descent into the material world. Obviously, Ficino’s interpretation marks a significant alteration to the original account. According to Ovid, Narcissus was chastised by Eros for his refusal to participate in the sexual life appropriate to free Greek men by sharing his body with men and women alike. The punishment imposed on the beautiful youth, solicited by a rejected lover — the nymph Echo — consists in his falling in love with his own image, a reflection he continues to worship in Hades even after his death. … Plotinus had already related this story to an entirely different context, namely to the soul’s failure to contemplate the higher world, which resulted in its getting lost in the shadowy and totally illusory world of matter.”

Kodera argues that the descent of the soul into body can be also viewed as a creative and positive act, and not as a calamity. This is precisely how the embodiment of the soul is described in Poimandres, a chapter in the Corpus Hermeticum. At the beginning, the primordial man – a soul without a body – looked down upon the world of nature:

“Nature smiled for love when she saw him whose fairness brings no surfeit 〈and〉 who holds in himself all the energy of the governors [planets] and the form of god, for in the water she saw the shape of the man’s fairest form and upon the earth its shadow. When the man saw in the water the form like himself as it was in nature, he loved it and wished to inhabit it; … Nature took hold of her beloved, hugged him all about and embraced him, for they were lovers.” (par. 14) 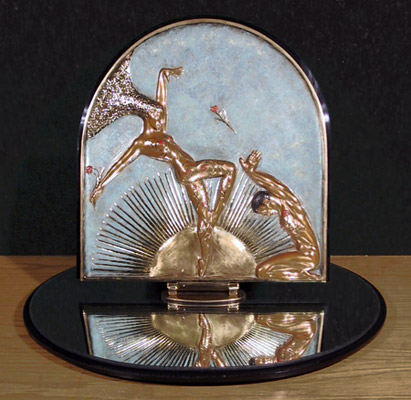 Returning to Borges and his lifelong obsession with mirrors, in his story Tlön, Uqbar, Orbis Tertius, there is a famous quote which says that “mirrors and copulation are abominable since they both multiply the number of men….” Thanks to the mirror’s capacity to receive, retain and reproduce all sorts of constantly changing images, it can be symbolically likened to the womb. As such, it becomes an emblem of the soul’s receptivity towards spirit, which grants the soul the powers of divination. In this role, the mirror can be deceptive, but it can also “focus and enhance light, thus acting as a screen that receives and eventually itself becomes creative,” says Kodera. And this is the essence of the mirror’s magic – to unite the above with the below with loving devotion to both spirit and matter. 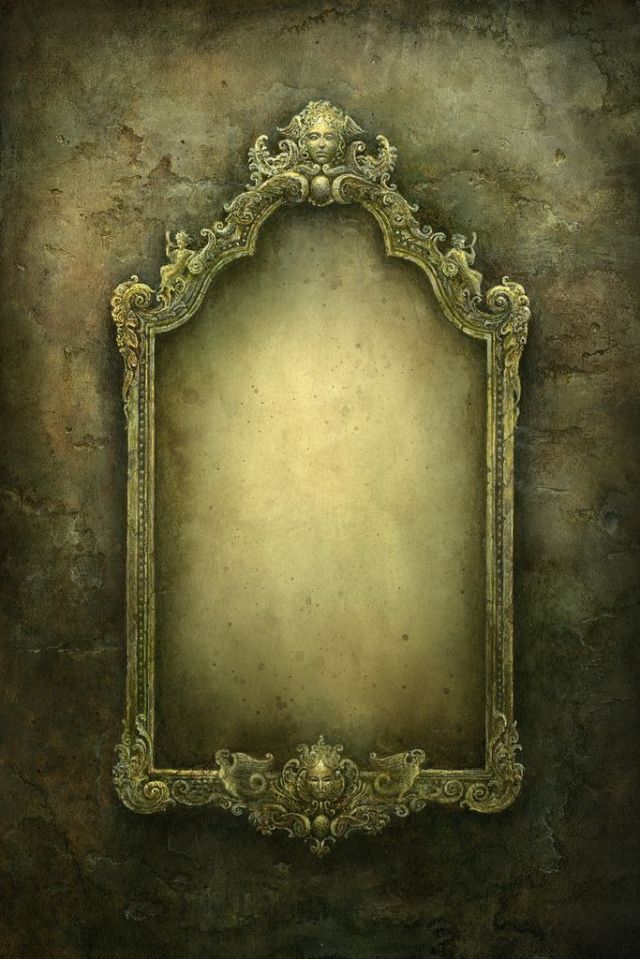 Hermetica: The Greek Corpus Hermeticum and the Latin Asclepius in a New English Translation, with Notes and Introduction, by Brian P. Copenhaver, Kindle edition

26 Responses to In the Crystalline Maze: Symbolism of the Mirror