The Shattering Power of the Theatre

I. “I can take any empty space and call it a bare stage. A man walks across this empty space whilst someone else is watching him, and this is all that is needed for an act of theatre to be engaged.” 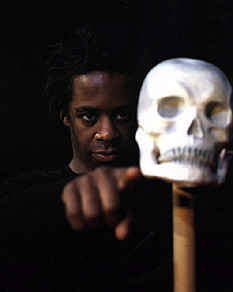 Perhaps theatre is the most primal of all arts. As far as we can tell, it developed alongside and through agricultural and religious ritual. The mask, its main symbol, is age old, with the first objects of this kind dating back to the Neolithic period (ca 7000 BC). In Ancient Greece, theatre was dedicated to and inextricable from the cult of Dionysus. Drama and dream are two words that come from a common root, which means that the theatre offers a way of looking behind the curtain straight into the eternal dimension. In The Birth of Tragedy, Nietzsche saw the beginning of the theatre in the ecstatic performance of hymns sung and danced in honor of Dionysus:

“In the Dionysian dithyramb man is aroused to the highest intensity of all his symbolic capabilities. Something never felt before forces itself into expression — the destruction of the veil of Maja, the sense of oneness as the presiding genius of form, of nature itself. Now the essence of nature must express itself symbolically; a new world of symbols is necessary, the entire symbolism of the body, not just the symbolism of mouth, face, and words, but the full gestures of the dance — all the limbs moving to the rhythm. And then the other symbolic powers grow, those of music, rhythm, dynamics, and harmony — all with sudden spontaneity.” 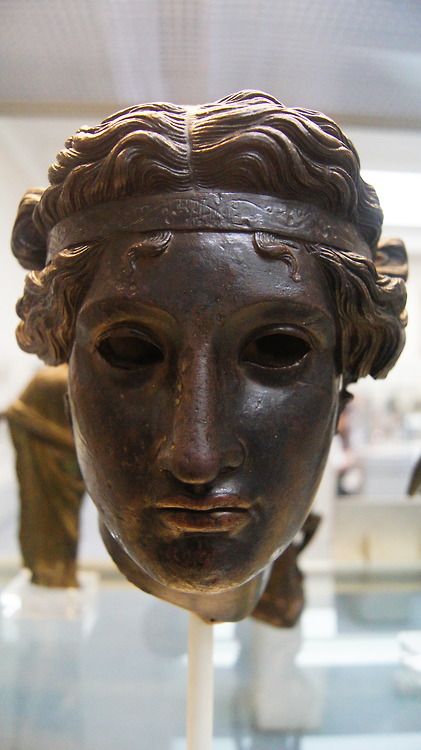 In his classic work Dionysus: Myth and Cult, Walter Otto speaks of the “shattering” appearance of the god as the one who simultaneously brings “pandemonium and silence.” The central Dionysian symbol appears to be the mask. Otto saw the mask as “the strongest symbol of presence.” In his view, it depicts a god or spirit who appears, who is encountered, but who is also a being from beyond:

“It is the symbol and the manifestation of that which is simultaneously there and not there; that which is excruciatingly near, that which is completely absent – both in one reality. … The final secrets of existence and non-existence transfix mankind with monstrous eyes.”

A stone mask from the neolithic period, via https://en.wikipedia.org/wiki/Mask#/media/File:Musee_de_la_bible_et_Terre_Sainte_001.JPG

In this passage Otto captures the essence of the theatre: it is palpable and material, arresting and tangible, but at the same time the spectator feels that there is a division, a line that cannot be crossed because the reality presented on the stage is not of this world – it invokes the metaphysical dimension.

My first theatrical epiphany occurred while watching Peter Brook’s Mahabharata on TV when I was about twelve years old. It was a deeply transformative experience, arresting from the very first moment when I saw the orange flames that preceded the opening credits. In his captivating book about the theatre entitled The Empty Space, Brook speaks of the Holy Theatre as the one which makes the invisible visible:

“We are all aware that most of life escapes our senses: a most powerful explanation of the various arts is that they talk of patterns which we can only begin to recognize when they manifest themselves as rhythms or shapes. We observe that the behaviour of people, of crowds, of history, obeys such recurrent patterns. We hear that trumpets destroyed the walls of Jericho, we recognize that a magical thing called music can come from men in white ties and tails, blowing, waving, thumping and scraping away. Despite the absurd means that produce it, through the concrete in music we recognize the abstract, we understand that ordinary men and their clumsy instruments are transformed by an art of possession. We may make a personality cult of the conductor, but we are aware that he is not really making the music, it is making him—if he is relaxed, open and attuned, then the invisible will take possession of him; through him, it will reach us.”

The theatre has the power of awakening our imagination, through which our inner eye opens to the images that populate the invisible. On the stage, objects, gestures and words transform into universal symbols. If what we have experienced was the Holy Theatre, we feel that a profound and invisible eternal truth has made itself present in our midst. The transient moment that can never be repeated in the same way (the theatre is all about portend though fleeting moments) has been endowed with a symbolic dimension. I remember being particularly struck by a performance of Samuel Beckett’s Waiting of Godot, which I saw years ago on a school trip. One prop particularly caught my attention with an irresistible force: a suitcase full of sand carried by Lucky, a slave to the character Pozzo. I resonate deeply with the following passage from Brook, in which he gives homage to Beckett’s unique talent of symbolization:

“Beckett’s plays are symbols in an exact sense of the word. A false symbol is soft and vague: a true symbol is hard and clear. When we say ‘symbolic’ we often mean something drearily obscure: a true symbol is specific, it is the only form a certain truth can take. The two men waiting by a stunted tree, the man recording himself on tapes, the two men marooned in a tower, the woman buried to her waist in sand, the parents in the dustbins, the three heads in the urns: these are pure inventions, fresh images sharply defined—and they stand on the stage as objects. They are theatre machines. People smile at them, but they hold their ground: they are critic proof. We get nowhere if we expect to be told what they mean, yet each one has a relation with us we can’t deny. If we accept this, the symbol opens in us a great and wondering O.” 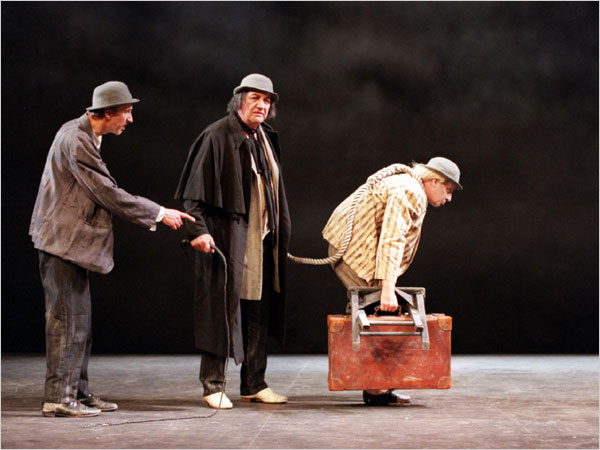 Symbols are eternally reborn in modern costumes. The great artists of the theatre have never had any doubts about the fluidity of all material representations of the underlying symbolic order. We have seen marvellous performances of female Hamlets, as we have seen Hamlets of all races. The Tragedy of Hamlet envisaged by Peter Brook achieved the seemingly impossible by bringing Hamlet back to life for the modern audience. As one critic wrote,

“It is a landmark production of the most hackneyed great play in history precisely because it compels us to see it with utterly fresh eyes. The fine Polish critic Jan Kott–an influence on Brook’s early work–wrote memorably about Hamlet that he’s become like Leonardo’s Mona Lisa. ‘We know she is smiling even before we have seen the picture,’ Kott wrote. ‘Mona Lisa’s smile has been separated from the picture, as it were.’ … Peter Brook’s aim is to see behind the smile.”

11 Responses to The Shattering Power of the Theatre