Posted on September 3, 2016 by Symbol Reader 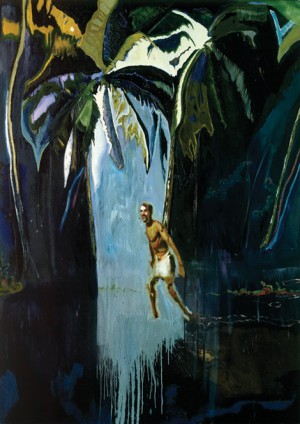 “You’re sitting here with us, but you’re also out walking

in a field at dawn. You are yourself

the animal we hunt when you come with us on the hunt.

You’re in your body like a plant is solid in the ground,

lying empty on the beach. You’re the fish.

In the ocean are many bright strands

and many dark strands like veins that are seen

when a wing is lifted up.

Your hidden self is blood in those, those veins

that are lute strings that make ocean music,

not the sad edge of surf, but the sound of no shore.”

Consider this: over ninety-five per cent of the universe is invisible. The existence of the so-called dark matter and dark energy cannot be measured or observed directly; we can only rely on the gravitational effects caused by them. Dark matter, which outweighs standard matter five times, has mass and gravity but it does not reflect or absorb light. What is essential is invisible to the eye. And yet it is fundamental to the whole universe. It initiated its creation. It anchors galaxies, making them stable instead of full of celestial objects spinning around precariously. Becoming conscious of these unconscious processes active in our universe requires a shift in perspective. As Jung noted in Mysterium Coniunctionis, “the conscious mind is usually reluctant to see or admit the polarity of its own background, although it is precisely from there that it gets its energy.” Or as Rumi said, “life’s water flows from darkness.”

This entry was posted in Dark Matter and tagged Carl Gustav Jung, Dark Matter, Rumi, the unconscious. Bookmark the permalink.