Lakshmi – the Goddess of Worldly Enjoyment and Spiritual Liberation

Lakshmi, the most widely worshiped Indian goddess, emerged on a lotus out of the primeval ocean of milk. In the pantheon of goddesses she is a soothing and gentle presence. In her book Awakening Shakti, Sally Kempton includes compelling words of Thomas Merton, which perfectly invoke Lakshmi’s divine essence as balancing the fiery essence of warrior goddesses such as Kali or Dhurga: “There is in all things an inexhaustible sweetness and purity, a silence that is a fountain of action and joy. It rises up in wordless gentleness and flows out to me from the unseen roots of all created being.” The ocean of milk not only gave the world Lakshmi but also soma – the life-giving moon nectar. Ayurvedic medicine speaks of soma as a vital essence which can be found in the bone marrow. It is supposed to govern sexuality and rejuvenation, cool down the fiery Kundalini power and, as Kempton puts it, it is “the water of life and the subtle nectar that moistens the heart.” In iconography, Lakshmi is usually portrayed flanked by two elephants showering her with water while she pours golden coins out of her hands in a gesture of abundance.

In many ways, Lakshmi is the primordial mother goddess. Before she was even named, she already existed in the minds of her worshipers as a lotus goddess on the one hand and as “sri,” explained by Rhodes as “splendor, glory, majesty, brilliance, and the divine power of auspiciousness,” on the other. Ancient Indian art rejoiced in depictions of lotuses resembling feminine figures curling gracefully upwards. Feminine figures holding lotuses symbolized life-force and fertility. Besides the well-known symbolic meaning of the lotus as rising from mud through the water and into the air, always gloriously untouched by any kind of impurity, it carries an additional significance pointedly explained by Rhodes:

“…lotus,” also literally denotes a foothold: ‘pad’ refers to foot and ‘ma’ refers to a measured expansion across a spatial dimension. The lotus seat serves as the foundation upon which the gods rest in their embodied forms when they become manifest upon the earth…” 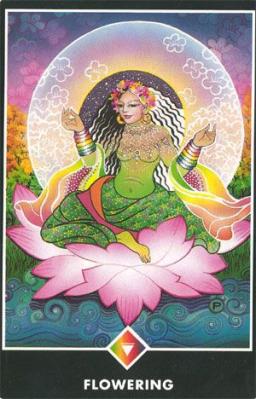 As said before, in the earliest Vedic texts an abstract quality called “sri” was not associated with any particular goddess, though it already denoted a radiant divine feminine force, which bestowed abundance and dispelled misfortune. In the later Vedic period those qualities started to be called Sri Lakshmi. The name Lakshmi is related to a Sanskrit word meaning “sign, imprint, symbol, an embodied expression.” The goddess Lakshmi began to embody the abstract qualities of sri; she became the living symbol that manifested itself as a divine revelation of a deeper mystery.  Rhodes calls her “the quintessential devi” Devi, the Sanskrit word for “goddess,”  is derived from “div,” which means to shine, to play, to sparkle, to rejoice, and also to gamble, as Rhodes further explains:

“The term, then, also conveys the excitement of uncertainty, the expectancy of luck, and the vibrant sensation that anything can happen – all of these as opposed to the frozen stagnancy of absolute certainty. Laksmi is the epitome of luminous energy in action… When that luminosity expresses itself as bounteous beauty, delight, harmony, abundant wealth, and spiritual liberation-in short, prosperity of every kind – then it is recognized and called upon as Laksmi, goddess of abundance.”

By her devotees she is called “bhukti-mukti pradayini” – “bestower of material enjoyment and spiritual liberation.” She infuses the world with four qualities: kama, artha, dharma and moksa. The former three deal with worldly enjoyment, the latter denotes freedom from worldly attachment. They are the four goals of life. Kama is pleasure, sensuality, sexuality and passion. It gives the spark to procreate being the beauty of all life, and all the flavours of material reality. Artha is wealth and its fluid circulation in society. Unsurprisingly, the goddess’s most ardent devotees are merchants, who enthusiastically erect shrines to the goddess. Diwali, the most important festival devoted to Lakshmi, also marks the beginning of a new financial year. It is during Diwali that gambling is encouraged as well. 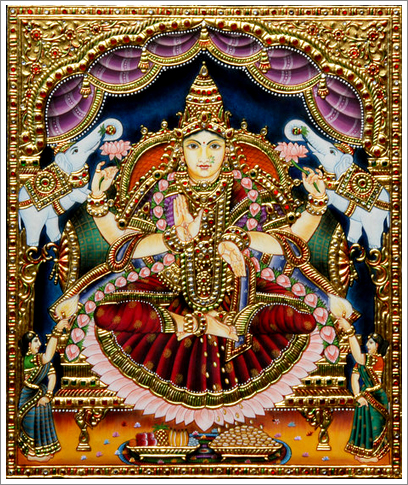 The coins that are being poured forth from the goddess’s open hands or from a golden urn symbolize all forms of abundant energy, not only money. Lakshmi is also the goddess of self-worth, believed to make the inner beauty of a person shine through. Her sacred animal is the owl symbolizing the ability to see in darkness and to be able to move towards the light of wisdom. Rhodes adds that the golden coins can also be looked upon as “bija mantras” or “seed syllables that are produced from the body of the goddess as vibratory patterns of sacred sound.” They are the fruit of her womb holding “the potentialities of all of creation.” Through those sound-forms, i.e. the fifty-two letters of the Sanskrit alphabet, the goddess is “unfurling herself into the universe as the matrka Sakti (matrix of cosmic energy). Together with her consort Visnu, Lakshmi preserves and upholds harmony in all the realms. This is her role as an upholder of dharma (the Sanskrit root word “dhr” meaning foundation and support). Rhodes writes:

“In general, we may consider dharma to be the energy governing harmonious relationships – with oneself, with one’s spouse, children, and family, with one’s community, with one’s natural environment, and with the gods.  On a cosmic level, dharma is the harmony of interconnectedness that upholds society and supports the creation…”

From Lakshmi’s perspective, doing the right thing often involves mundane tasks such as cleaning and maintaining self-discipline. Her festival begins with a thorough housecleaning because it is believed that she will not grace a dirty house. The final component is moksa – release from attachment, spiritual liberation. Mahalakshmi is the Great Illusion and a means to liberation from it. Kempton observes:

“The release from cyclical existence in samsara, then, comes from the same goddess who sanctions the world and embellishes it, even mesmerizing one to enjoy attachment to it for lifetime after lifetime.”

The goddess of luck has a sister called Alaksmi, who brings bad luck whenever an imbalance occurs. Lakshmi does not approve of “an overly zealous attention to any one of the four aims of life to the exclusion of the others.” The truth of beingness calls for a dynamic equipoise between the four elements. This task involves “weaving together” (the word Tantra means “weaving”) the seemingly irreconcilable opposites. Vedic Hymn to Sri conveys this paradox beautifully:

“Draw unto me, O sacred fire, the goddess Lakshmi,

The resplendent, the golden,

Garlanded in silver, and in gold.

I invoke the goddess Sri,

Who manifests as golden light.

She blazes with the effulgence of fire

Seated on a lotus, 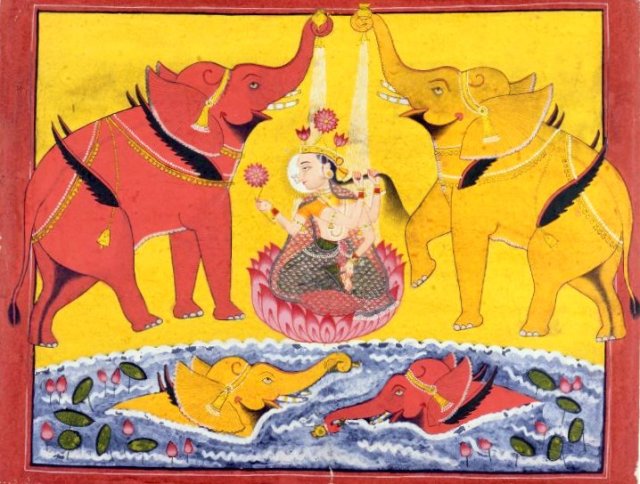