In Defense of the Primeval Forest

“The edge of the cancer
Swells against the hill-we feel
a foul breeze-And it sinks back down.
The deer winter here
A chainsaw growls in the gorge.

Ten wet days and the log trucks stop,
The trees breathe.
Sunday the 4-wheel jeep of the
Realty Company brings in
Landseekers, lookers, they say
To the land,
Spread your legs.

The jets crack sound overhead, it’s OK
here;
Every pulse of the rot at the heart
In the sick fat veins of Amerika
Pushes the edge up closer–

A bulldozer grinding and slobbering
Sideslipping and belching on top of
The skinned-up bodies of still-live bushes
In the pay of a man
From town.

Behind is a forest that goes to the Arctic
And a desert that still belongs to the
Piute
And here we must draw
Our line.

As the crickets’ soft autumn hum
is to us
so are we to the trees
as are they
to the rocks and the hills.”

The ancient Bialowieza forest, home to 800 bison and one of Europe’s last primeval woodland, is under serious threat. The Polish government has ordered massive logging operations, justifying them with half-baked excuses about an alleged bark beetle threat. Although the European court of justice has issued a ban on the logging operations, the nationalistic, anti-EU Polish officials are determined to ignore it. The motives of the government are not merely financial. The war waged in Poland is first and foremost cultural. This has been lucidly explained by a Polish blogger here  He claims convincingly that the Bialowieza conflict is part and parcel of an ideological war. The right-wing, Catholic government views nature as separated from humans, who are in the right to do with it what they will. In their eyes, nature is not wise or self-regulating. It needs human control and intervention. The current Minister of Environment declared the following recently:

“We cannot allow for humankind to be perceived as the greatest threat to natural resources; we do not accept that the ban on logging trees or killing animals, promoted by Satanists on the one hand and kind-hearted people with little knowledge about the natural world on the other, is the only way to protect the environment.”

Unregulated, wild nature is Satan’s domain. It needs to be subdued and exorcised so that it can serve humans. How far we are here from shamanism and the wisdom of indigenous cultures. As David Abram puts it in his wonderful book The Spell of the Sensuous: Perception and Language in a More-Than-Human World:

Magic, then, in its perhaps most primordial sense, is the experience of existing in a world made up of multiple intelligences, the intuition that every form one perceives—from the swallow swooping overhead to the fly on a blade of grass, and indeed the blade of grass itself—is an experiencing form, an entity with its own predilections and sensations, albeit sensations that are very different from our own.”

Balowieza is a place of primeval magical intelligence. It does not need humans to flourish. As Alan Weisman wrote in The World Without Us, it is:

“Europe’s last remaining fragment of old-growth, lowland wilderness. Think of the misty, brooding forest that loomed behind your eyelids when, as a child, someone read you the Grimm Brothers’ fairy tales. Here, ash and linden trees tower nearly 150 feet, their huge canopies shading a moist, tangled understory of hornbeams, ferns, swamp alders and crockery-sized fungi. … The air, thick and cool, is draped with silence that parts briefly for a nutcracker’s croak, a pygmy owl’s low whistle, or a wolf’s wail, then returns to stillness.

The fragrance that wafts from eons of accumulated mulch in the forest’s core hearkens to fertility’s very origins.”

And here comes the key passage:

“In the Bialowieza, the profusion of life owes much to all that is dead. Almost a quarter of the organic mass aboveground is in assorted stages of decay – more than 50 cubic yards of decomposing trunks and fallen branches on every acre, nourishing thousands of species of mushrooms, lichens, bark beetles, grubs, and microbes that are missing from the orderly, managed woodlands that pass as forests elsewhere.”

Culling and selling mature trees prevents them from becoming “a windfall of nutrients to the forest.” If we want nature to continue nourishing and sustaining us in the same way, the best course of action is to let her do her magic unencumbered. 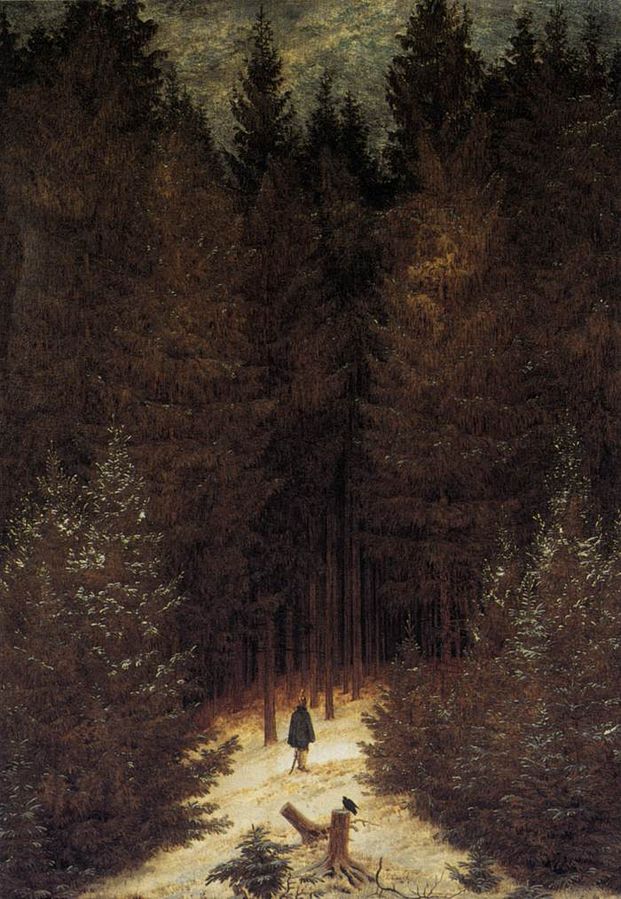 Caspar David Friedrich, “The Chasseur in the Forest”

8 Responses to In Defense of the Primeval Forest