Jung on Alchemy (7): The Coniunctio – part 1 – The Mercurial Fountain 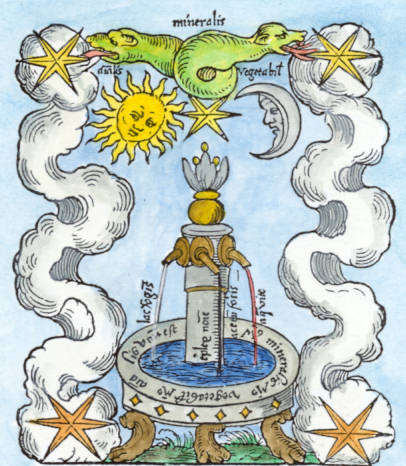 “And just as the cosmos is not a dissolving mass of particles, but rests in the unity of God’s embrace, man must not dissolve into a whirl of warring possibilities and tendencies imposed on him by the unconscious, but must become the unity that embraces them all.”

“To be great, be whole;
Exclude nothing, exaggerate nothing that is not you.
Be whole in everything. Put all you are
Into the smallest thing you do.
So, in each lake, the moon shines with splendor
Because it blooms up above.”

There is a desire in every soul to open up and merge, rather than stand alone. The Sufis called this the longing of every soul for the beloved, while the Orphics placed Eros at the top of the Pantheon. Jung, after Silberer, referred to the coniunctio as the central idea of alchemy. In Rosarium Philosophorum, a sixteenth-century alchemical treatise, we read:

“There is the conjunction of two bodies made, and it is necessary in our magistery, and if but one of our two bodies only should be in our Stone, it would never give tincture by any means.”

As Jung explains in The Psychology of Transference, “the coniunctio oppositorum in the guise of Sol and Luna, .., occupies such an important place in alchemy that sometimes the entire process takes the form of the hierosgamos [holy marriage] and its mystic consequences.” In the same book he guides the reader through a sequence of selected woodcuts from Rosarium Philosophorum. Adam McClean of The Alchemy Website, inspired by Jung, presents his own reflections on the full sequence of twenty images (http://www.levity.com/alchemy/roscom.html).  This and the subsequent posts will summarize Jung and McClean’s offerings concerning the images of the Rosarium. My goal is to elucidate the nature of the coniunctio as presented in the Rosarium images while simultaneously referring to the Jung’s final work Mysterium Coniunctionis.

This image showcases the Mercurial Fountain, which symbolizes the activation of the unconscious. The fountain as a symbol is “an image of the soul as the source of inner life and spiritual energy”, as was aptly summarized by Cirlot in his Dictionary of Symbols. About Illustration 1 McClean writes:

“In illustration 1, we have a picture of man’s inner soul world. In the lower part of the soul we see a triple fountain which pours forth the threefold soul-substance – the Virgin’s Milk ( the feminine receptive lunar forces in the soul), the Spring of Vinegar (the masculine sharp, penetrating solar forces in the soul) and the Aqua Vitae, the water of life (the inner source of soul energies). These three streams pour forth from the head of the fountain, at the central point of the soul, and stream down merging together in the basin at the lowest part of the soul. This vessel contains the primal substance of the soul forces, the Inner Mercury, the Mercury of the Philosophers, that is one and yet is composed of these three streams.

Thus we have here a picture of the unintegrated soul realm of man. The three streams pour down from the heart centre into the lower soul world, but are cut off from a balanced direct connection with the upper soul, the realm of the soul that can touch upon the spiritual. The only connection with this upper soul initially is through the unintegrated polarity of the lunar and solar streams within the soul.”

For alchemists, Mercury was the fluid substance symbolizing the oscillating nature of the unconscious. In Mysterium Coniunctionis Jung called Mercurius the ligament of the soul because it united the body with the spirit. To amplify McClean’s description, in image 1, there are four stars which symbolize the four elements while the fifth star stands for  the quintessence, the unity achieved at the end of the opus. Further, if we see the Mercurial Fountain as located in the centre of the universe, then the four stars may be an allusion to the Four Rivers of Paradise. The three mercurial streams point to the inherent ambivalence of Mercurius – he is both nourishing and poisonous, as indeed is the unconscious. The vinegar is the dissolving substance, which penetrates and breaks down the forms which need to be destroyed before the new structures can be built. The forces erupting from the depths of the unconscious may have a destructive aspect. The water of life cleans and purifies, healing and reviving after the shock and suffering caused by the acidic spring erupting from the unconscious. Finally, the milk nourishes and allows the soul to grow. There is also nourishment coming from the stars, which are being licked by the two mercurial dragons.

The first image already heralds the future coniunctio, while presenting all the elements of transformation. “With its quiet song and strange power” (to quote Denise Levertov) the Mercurial Fountain is rushing, moving and flowing within our innermost being.

To be continued with further images…

9 Responses to Jung on Alchemy (7): The Coniunctio – part 1 – The Mercurial Fountain