The Bembine Table of Isis

“I am all that has been and is and shall be; and no mortal has ever lifted my veil.”

(the words inscribed on the statue of Isis of Sais) 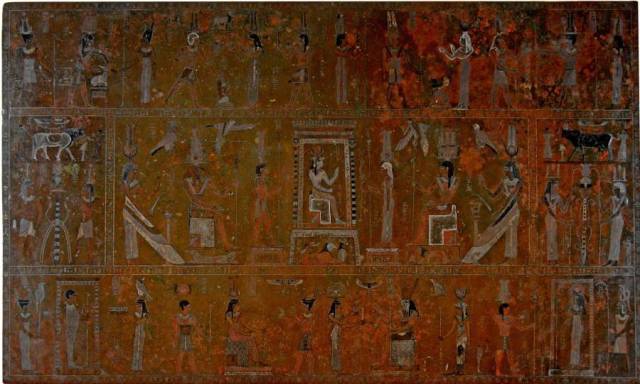 The Bembine Table of Isis, also known as Mensa Isiaca, is a bronze tablet decorated with a variety of metals including silver, gold and black “Corinthian bronze,” a prestigious and extremely valuable metal alloy. The tablet is on display in the Egyptian Museum in Turin. Scientists have established that probably it was not made in Egypt but in the first century BC in Rome for a temple to the goddess Isis. The hieroglyphs it contains are random and not authentically Egyptian. And yet, despite the scientific condescension, this outstanding artifact has fascinated generations of occult thinkers and researchers. Manly P. Hall wrote that “whoever fashioned the Table was not necessarily an Egyptian; he was an initiate of the highest order, conversant with the most arcane tenets of Hermetic esotericism.” It is quite remarkable that Museo Egizio in Turin, one of the largest and most important Egyptian museums in the world, acknowledges the significance of the Table of Isis as its first most notable artifact and the kernel of the entire collection. Mensa Isiaca is actually the opening exhibit of the Museum, accompanied by a statue of Isis. 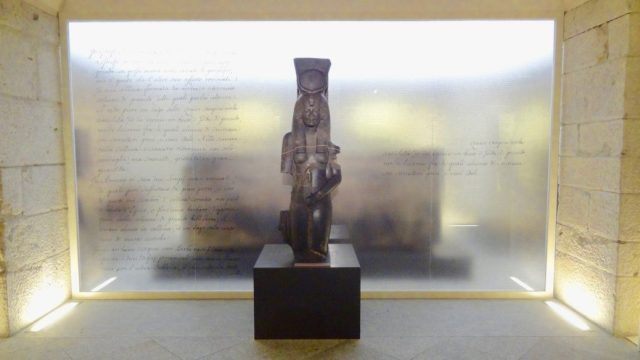 The following is drawn on Chapter 10 – “The Bembine Table of Isis” – of Manly P. Hall’s Secret Teachings of All Ages. There P. Hall quotes Athaniasius Kircher, a 17th-century German scholar, who held that the Bembine Table of Isis “teaches, in the first place, the whole constitution of the threefold world – archetypal, intellectual, and sensible”.

“Plato was initiated into the ‘Greater Mysteries’ at the age of 49. The initiation took place in one of the subterranean halls of the Great Pyramid in Egypt. The ISIAC TABLE formed the altar, before which the Divine Plato stood and received that which was always his, but which the ceremony of the Mysteries enkindled and brought from its dormant state. With this ascent, after three days in the Great Hall, he was received by the Hierophant of the Pyramid (the Hierophant was seen only by those who had passed the three days, the three degrees, the three dimensions) and given verbally the Highest Esoteric Teachings, each accompanied with Its appropriate Symbol. After a further three months’ sojourn in the halls of the Pyramid, the Initiate Plato was sent out into the world to do the work of the Great Order, as Pythagoras and Orpheus had been before him.”

According to Manly P. Hall himself, the Tablet of Isis holds “the key to Chaldean, Egyptian, and Greek theology”. Elyphas Levi thus interpreted the meaning of the artifact:

“It is divided into three equal compartments; above are the twelve houses of heaven and below are the corresponding distributions of labor [work periods] throughout the year, while in the middle place are twenty-one sacred signs answering to the letters of the alphabet. In the midst of all is a seated figure of the pantomorphic IYNX [Isis – the goddess who assumes all forms; a transmitting intelligence], emblem of universal being and corresponding as such to the Hebrew Yod, or to that unique letter from which all the other letters were formed.”

Manly P. Hall continues summarizing the symbolism of the Tablet:

“The upper panel contains the twelve figures of the zodiac arranged in four triads. The center figure in each group represents one of the four fixed signs of the zodiac. … In the secret teachings of the Far East these four figures–the man, the bull, the lion, and the eagle–are called the winged globes or the four Maharajahs who stand upon the corners of creation. The four cardinal signs–P, Capricorn; X, Aries; B, Cancer; F, Libra–are called the Powers. The four common signs–V, Pisces; A, Gemini; E, Virgo; H, Sagittarius–are called the Minds of the Four Lords….

If the throne be accepted as the symbol of the spiritual sphere, the border typifies the elements, and the various panels surrounding the central one become emblematic of the worlds or planes emanating from the one divine source.

If cosmogony be the subject of consideration, the central panel represents the spiritual worlds, the upper panel the intellectual worlds, and the lower panel the material worlds.

Finally, Manly P. Hall compares the Tablet to the Orphic egg of creation, which represents the Cosmos encircled by the Serpent – the Creative Spirit. The way the snake spirals is analogous to the path of the Moon – with the snake’s head and tail representing the apparent halt in moon’s orbit (the lunar nodes). For alchemists, Isis, the healing goddess, who not only healed Ra of poisoning but also put together the dismembered Osiris, was one of the metaphors of prima materia. She is the reason why the manifest universe unfolds spirally from the Source. As Jung wrote in Mysterium Coniunctionis:

“Materia prima in its feminine aspect: it is the moon, the mother of all things, the vessel, it consists of opposites, has a thousand names, …, as Mater Alchimia it is wisdom and teaches wisdom, it contains the elixir of life in potentia and is the mother of the Saviour and of the filius Macrocosmi, it is the earth and the serpent hidden in the earth, the blackness and the dew and the miraculous water which brings together all that is divided.“

“… she personifies that arcane substance, be it dew or the aqua permanens, which unites the hostile elements into one. … The cognomen of Isis was the Black One. … since ancient times she was reputed to possess the elixir of life as well as being adept in sundry magical arts. She was also … rated as a pupil of Hermes, or even his daughter. … She signifies earth, according to Firmicus Maternus, and was equated with Sophia, … the vessel and the matter of good and evil. An inscription invokes her as ‘the One, who art All.‘ She is named the redemptrix. In Athenagoras she is ‘the nature of the Aeon, whence all things grew and by which all things are.‘”

I had the opportunity to visit the Egyptian Museum of Turin a few months ago and it was a transformative experience. To stand face to face with the greatest mysteries of the goddess, as represented in the Bembina Tablet of Isis, was a rare blessing.

Manly P. Hall, The Sacred Teachings of All Ages, http://www.sacred-texts.com/eso/sta/sta13.htm

9 Responses to The Bembine Table of Isis