“All my photos correspond to moments that I have experienced intensely.”

Sebastião Salgado, “From my Land to the Planet,” Kindle edition 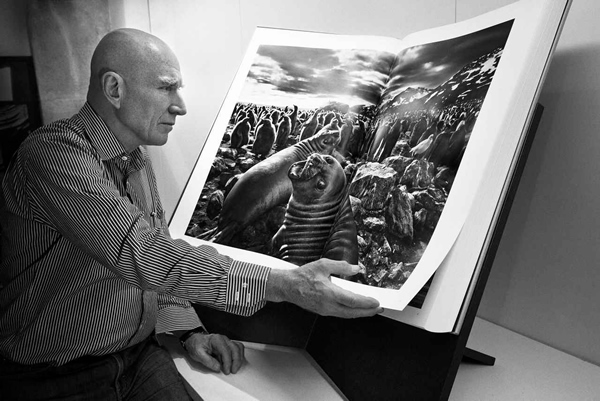 The movie Salt of the Earth (2015) directed by Wim Wenders and dedicated to the life and work of a renowned photographer Sebastião Salgado begins with a reflection on the origins of the word “photographer,” as “the one who writes and rewrites the world with light and shadow.” I was deeply touched by the exhibition of Salgado’s photography project “Genesis,” which I have recently seen in Zurich. His reverential method of working made a deep impression on me. A true artist is indeed the one who writes and rewrites our world, deepening and expanding our vision. I had seen his photos before and adored them but I had never taken the time to look deeper into the ways they were created. 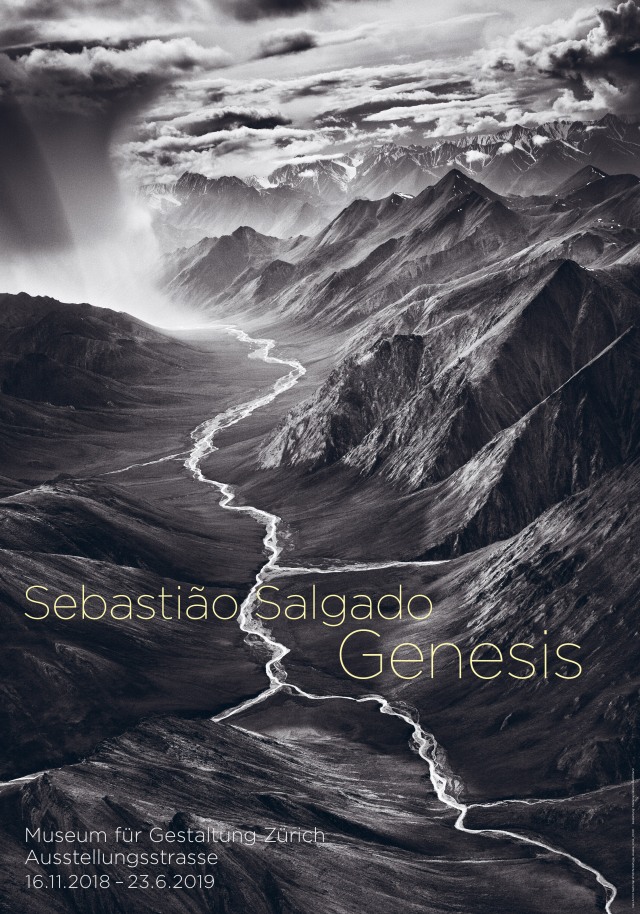 The first thing that strikes about his photography is of course the fact that the images are black and white. Genesis is Salgado’s latest project in which he photographed the unspoilt areas of the planet; all of his previous works were photos of people, often suffering, dying or toiling for little reward but nevertheless displaying striking dignity. The effect of the black and white, to my mind, is rendering the images more hauntingly archetypal, and thus touching the very core of our being. In the book From my Land to the Planet, in which the journalist Isabell Francq lends voice to the photographer, he also refers to the choice of black and white for his photos:

“… with black and white and the entire range of greys, I can concentrate on people’s intensity, their attitude, their gaze, without all this being disturbed by colour.

Of course, reality is not like this, but looking at an image in black and white, it gets inside us, we digest it and, subconsciously, we colour it. Black and white, this abstraction, is thus assimilated by the viewer, who then appropriates it. I find its power extraordinary.”

Precisely, each photo of his seeps into the unconscious, transforming the viewer from within. Once you let his alchemy work on you, you will keep seeing the images in your mind’s eye. At least that is what happened to me. The Daily Telegraph wrote that his is a God’s eye view of the planet. In Wender’s movie a South American native was convinced that Salgado is in fact an incarnation of Jesus who came back to the earth to be a witness of this native’s life and determine whether he is worthy of going to heaven or hell. This was told as a humorous anecdote but Salgado’s godlike perspective is an accurate description of his art. Another important element is the absolute totality of his images. I find these words of his striking in this respect:

“Totally integrated with his surroundings, the photographer knows that he is going to witness something unexpected. When he merges into the landscape, into that particular situation, the construction of the image eventually emerges before his eyes. But in order to see it, he has to be part of what is happening. That’s what photography is. At a certain moment, all the elements are connected: the people, the wind, the trees, the background, the light.” 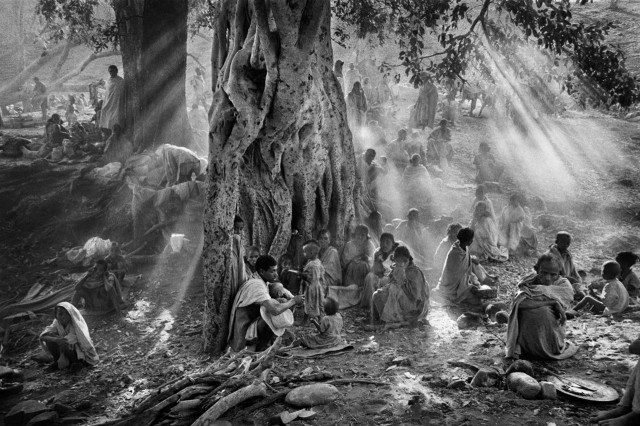 What I find particularly fascinating is Salgado’s own way from darkness to light during the span of his career. His initial projects showed famine, war, diseases, suffering, genocide and hard manual labour. Witnessing the genocide in Rwanda was his own nigredo, the dark night of the soul. He got depressed and lost his faith in humanity but he explained that he took these images because of a moral obligation to do so. In the project “Workers” he tracked manual labour all across the planet. Here is what he witnessed on Java:

“On Java, in a little paradise of beauty, I watched men cover fifty kilometres on foot, there and back, across rice paddies, clove-growing plantations and the tropical jungle, before climbing to an altitude of 2,300 metres, then descending another 600 metres on the other side, and going down into the crater of the Kawah Ijen volcano, a great producer of sulphur. Due to the toxic emissions, veritable clouds of poison, it was necessary to breathe entirely through the mouth and not the nose. As their sole defence, the workers stuffed a piece of material into their mouth; in the course of time, their teeth were completely ruined. Even though none of them weighed more than 60 kilos, each filled a basket with 70 to 75 kilos of minerals. They fixed two baskets at either end of bamboo cane and then climbed the 600 metres separating them from the exit to the crater. This took them about two hours, then they hurtled down the slopes of the volcano, to avoid being crushed by the weight of the baskets. It was extremely dangerous. Some of them dislocated their kneecaps. At the time, they received about $3.50 per journey. Afterwards, they rested for a couple of days in order to recover physically, so that by the end of the month, they pocketed just enough to survive.” 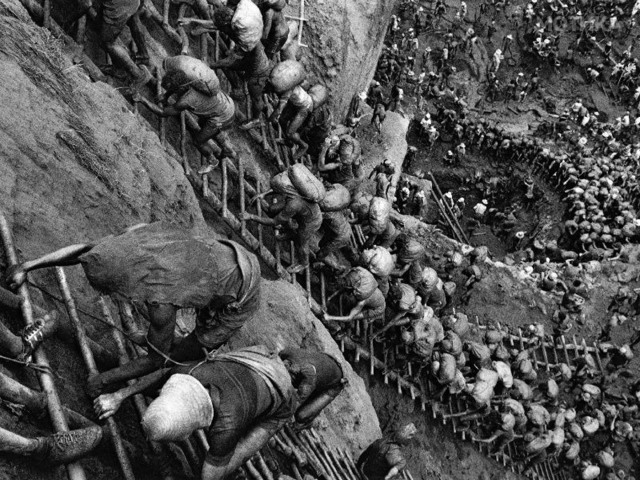 The Genesis project was his way of healing the wounded soul. “After having witnessed so much horror, I was now seeing so much beauty,” he says. Humans have managed to colonize more than half of the planet, yet still 46 per cent of the Earth has remained in the same state as at the time of the creation, almost intact. He did not work in Europe because here human intervention has been too extensive and too visible. Salgado’s aim was to show “the dignity and the beauty of life in all its forms and show how we all share the same origins.”

He travelled to Galapagos to trace the footsteps of Darwin and witness the land where the theory of evolution was born. There he had a moment of illumination looking at an iguana:

“… one day I was watching an iguana, a reptile that, a priori, appears to have little in common with our own species. But, looking closely at one of its front feet, suddenly I saw the hand of a Medieval knight. Its scales had made me think of a suit of chain mail, under which I saw fingers similar to my own! I had before my eyes the proof that we all come from the same cell, each species having then evolved in the course of time in its own way and in conformity with its own ecosystem.” 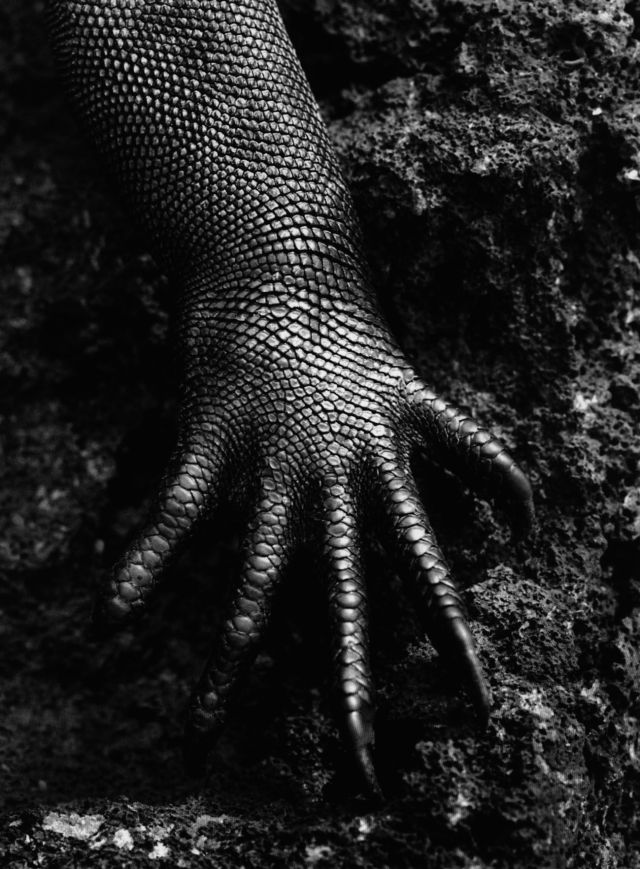 There were numerous memorable photos I would love to write about. The photos of the Nenets, an ethnic group native to northern arctic Russia, who live in very harsh climate and have very few possessions, leading a nomadic life with their reindeer, arrested me for long minutes. Salgado observed: “These people who live in cold climates survive with very little, yet their lives are as intense, rich and full of emotions as our own, perhaps even more so, as we multiply our material goods in an attempt to protect ourselves, so much so that we forget to live.” 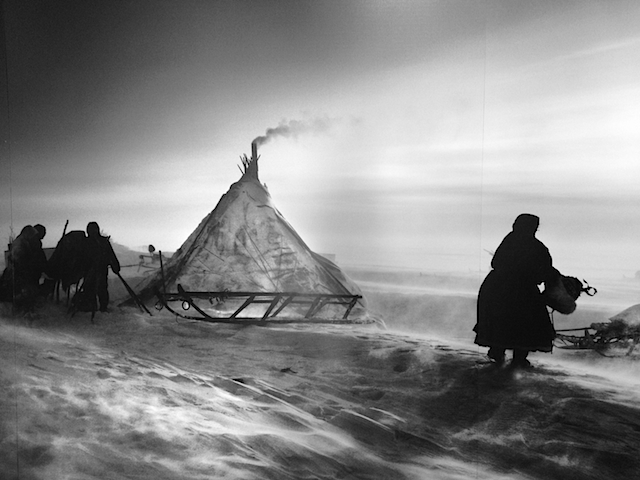 Salgado was almost 70 when he finished the project Genesis. Despite his age, he had not stopped to throw himself physically into his subjects, notwithstanding the limitations of harsh weather conditions or in the case of all the previous projects grave physical danger. His passion and devotion were always maximal. He concludes:

“First of all, I encountered the planet. I had already travelled round the world, but this time I felt that I was entering inside it. I have seen the world from its highest points to its lowest, I have been everywhere. I discovered minerals, plants and animals, and then I was able to look at us, the human race, as we were at the dawn of man. This gave me much comfort, because going back to its origins, humanity is very strong, especially rich in something that we have now lost after becoming city-dwellers: instinct. The modern, urbanized world, with its rules and regulations, is constraining. It is only in nature that we can find a little freedom.”

There is something godlike about this man, who set out to replant the entire forest on the damaged land that he had inherited from his parents. Everybody said it was a crazy venture but together with his wife Leila he actually created the first national park in Brazil- the Instituto Terra. At the end of Wender’s movie Salgado blissfully explains how his life has turned full circle. When he was a boy the land in Brazil where he grew up was rich and fertile with extensive areas of forests and beautiful rivers. At the end of his father’s life the land was barren and damaged, but he breathed new life into it, bringing the original native forest back to life. 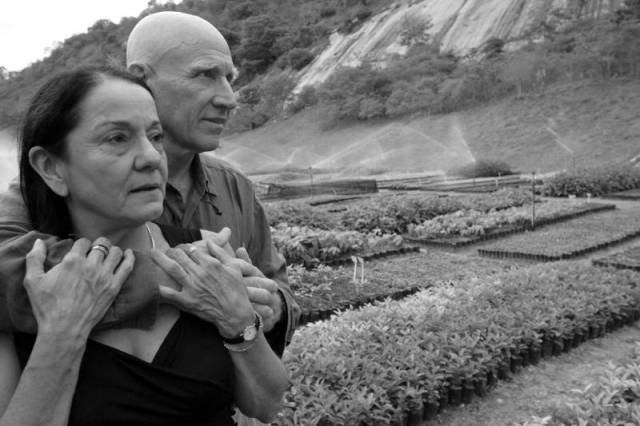 Salgado and his wife at the Instituto Terra (http://www.institutoterra.org/eng/midiaGalery.php#.XGCR5FxKjb0)