Symbolism of the River

“I do not know much about gods, but I think that the river is a strong brown god,” so begins the third of T.S. Eliot’s Four Quartets. The divinity of rivers has been recognized by all mythologies since the beginning of time. For the Egyptians, the androgynous god Hapi personified the Nile and was called the Lord of the River Bringing Vegetation. In Hinduism the river is the goddess Ganga – she is the spout of water rising from Shiva’s hair. The Kumbh Mela, the largest religious gathering in the world (over 120 million people), is held in four locations along the Ganges. The belief is that at these spots Vishnu spilt nectar of immortality from an urn, or kumbh. It was written in the Puranas: “Those who bathe in the bright waters of the Ganga where they meet the dark waters of the Yamuna during the month of Magh [roughly January/February] will not be reborn, even in thousands of years.”(quoted after The Guardian). The dates of celebrations are calculated according to the zodiacal positions of the Sun, the Moon and Jupiter. The incredible photos can be viewed here. Similarly, death and rebirth were also associated with rivers in Christian faith. Early Christians were baptized by total immersion in rivers, while in Judaism immersion is used as a rite of passage for converts.

Looking at the photos from India, one has to marvel at the symbolic power of the river, which stands for life itself, constantly changing, passing, flowing, moving forward, and yet somehow remaining the same – changing in time and timeless at the same time. Looking at a river, it is natural to fall into reverie and be transported to the other side of reality, like the dead were transported in Charon’s boat across the Styx.

“Even as a river,—partly (it might seem)
Yielding to old remembrances, and swayed
In part by fear to shape a way direct,
That would engulf him soon in the ravenous sea—
Turns, and will measure back his course, far back,
Seeking the very regions which he crossed
In his first outset; so have we, my Friend!
Turned and returned with intricate delay.”

Wordsworth’s words made me think of the famous Panta Rhei –  yes, everything flows, but sometimes, like the river, we also meander, retracing our steps, revisiting the past, returning to the source. 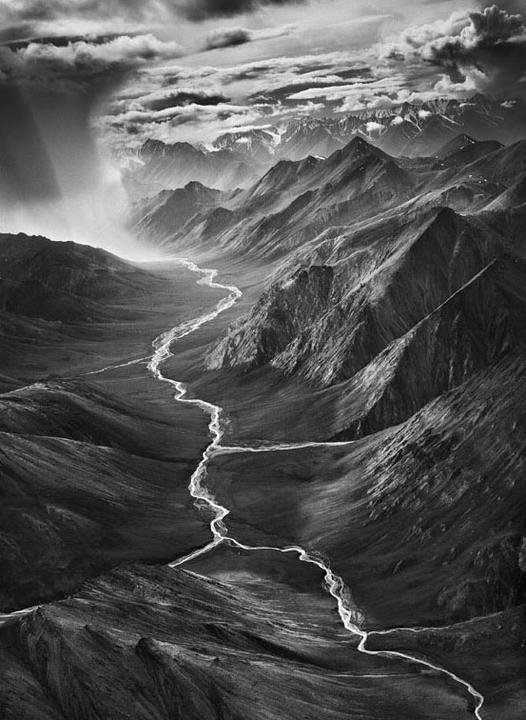 In a famous photo by Sebastião Salgado, the river’s source is bathed in supernatural light. The first streams that will become the mighty river first quietly percolate among the lofty mountain peaks, hidden from view and growing in power. Origins of great civilizations are invariably bound to rivers. According to the Genesis story, there were four rivers that flowed out of Eden. As C.G. Jung explained in Mysterium Coniunctionis (par. 276):

“…because it was the abode of the originally androgynous Primordial Man (Adam), the Garden of Eden was a favourite mandala in Christian iconography, and is therefore a symbol of totality and—from the psychological point of view—of the self.”

A Turkish carpet depicting a walled garden with the Four Rivers of Paradise in the Museum of Islamic Arts, Istanbul

It seems that the combination of masculine and feminine characteristics informs the symbolism of rivers in many spiritual traditions. On the Theosophy Trust website the author draws attention to the etymology of the word:

”The name ‘river’ comes from rivus or rive, indicating ‘a splitting asunder,’ a process not only recorded in geological history but in mythology as well. For if the river literally divides the earth and creates the canyon depths, symbolically it divides the world of the living from that of the dead.”

Hence the ambivalence of the symbol – the river brings life but also reminds us of change leading to death. In his seminal work “Fundamental Symbols: The Universal Language of Sacred Science” Rene Guenon relates the Pilgrim’s Way to the symbolic river of life and death:

He then proceeds to discuss each type of symbolism. In the case of going upstream, the river is identical with the World Axis. The celestial river such as Ganga descends to the world from celestial realms; in this way “the influences of the ‘world above’ are transmitted to the ‘world below’.” The four rivers of Paradise had their source at the foot of the World Tree, which itself is synonymous with the World Axis that links heaven and earth. These four rivers “spread the celestial influences” that concentrated at the source into the whole world.

When it comes to the symbolism of crossing the river, it is conceived either as an important transformation or transition in life, as death, as mentioned before, or as reaching Nirvana (“Gone, gone, gone all the way over, everyone gone to the other shore, enlightenment, hail!” – as the famous last words of the Heart Sutra translate). Guenon also compares descending with the current of the river towards the ocean as a journey towards Enlightenment. In The Book of Symbols, edited by Ami Ronnberg and published by ARAS, I found a passage from The Upanishads, which seems to enrich the symbolism of floating down the river of life:

The river seems to be an all-encompassing symbol, including life and death, wakefulness and sleep, language and silence, the upper world and the lower world, time and eternity, since everything, which lives and dies “partakes of the quality of riverness,” as The Book of Symbols summarizes.

14 Responses to Symbolism of the River