My imagination has always been stirred by crumbling ruins and underwater palaces. Their symbolism is directly connected with the astrological Neptune, a planet which governs dissolution by water, getting lost in imagination, fantasy and reverie and being enchanted by inner visions. It evokes the transience of all things material and a general feeling of world-weariness. The twelfth house of the Zodiac, which is ruled by Neptune, is a primordial ocean, the birthplace of the archetypes of the collective unconscious. Out of its primordial waters all form is manifested, as it precedes Aries, the first sign of the Zodiac, which brings manifestation on the physical plane. Without this non-material and unseen realm of images nothing could ever be born.

Neptune is often called a planet of illusions because if it features prominently in a natal chart, a person may be prone to excessive fantasizing and escapism. On the other hand, I would bet that all the self-realized mystics must have had a prominent Neptune in their charts. While individuation requires finding ourselves in the world of form and hard matter and creating order in our personal universe, Neptune shuns artificial order and dissolves all forms. From a mystical point of view, it is the physical world of our everyday lives which is an illusion (maya), while the real world is hidden and can only be reached through the dissolution of the ego.

There is a richly symbolic story written by one of my favourite writers, Jorge Luis Borges called The Circular Ruins. It shows the paradox of reality and illusion. A wizard leaves the world and retreats to the circular ruins, a magical place that possesses strong mystical powers, where the god of Fire resides. His purpose is to create a human being from his own dreams. He dreams longer and longer every day and yet all his creative attempts are fruitless. But then one day he dreams of a human heart, and after that he is able to create a human, piece by piece. He prays to Fire god to give life to his creation. The god agrees but on one important condition: nobody will know the boy is not a real human, the wizard’s secret cannot be revealed to anybody. Thus the magician has achieved his ambition but soon his victory and piece became blurred with boredom. In the end, the ruins of the sanctuary of the god of Fire are destroyed by fire and the wizard sees that his death is coming. Here is how the story ends:

He walked toward the sheets of flame. They did not bite his flesh, they caressed him and flooded him without heat or combustion. With relief, with humiliation, with terror, he understood that he also was an illusion, that someone else was dreaming him.

I have always felt more at home in the Neptunian realm of dreams than in the physical reality. The words “My Kingdom is not of this world” have always resonated very true for me. How strange that I should feel more inspired and energized looking at the Venus of Milo with her missing arms than at any other sculpture, however perfect or colourful it would be. Similarly, the works of the impressionists in which everything vibrates and in which the form is not settled yet, as it was at the moment of creation, are very vibrant and alive to me. I guess I am enchanted by this moment of emerging form that can be so beautifully observed in Michaelangelo’s sculptures. Conversely, I am enchanted by the crumbling form on the verge of returning to the primordial Neptunian waters. Ruins as well as all forms of ancient and dilapidated building have always held a special fascination for me.

I have recently read about two underwater ruins which quite captured my imagination. The first is the underwater palace of Cleopatra in Egypt. It was swept to the bottom of the ocean as a result of an earthquake. The beauty of it is breathtaking. The other one is the Neptune Memorial Reef, an underwater mausoleum in Florida. I was particularly impressed by the archetypal aptness of the name choice for this underwater cemetery. I used to live at the Polish seaside in the city of Danzig, five minutes away from a beautiful statue of Neptune. At that time I could pay daily homage to the god of the matrix from which all things arise. I often miss seeing him. 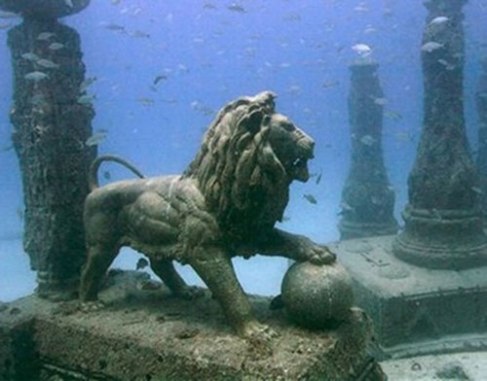