Birds on My Mind

I have been thinking recently of exploring bird symbolism, as birds seem to capture my attention wherever I go. The Sun is still in the air sign (Gemini), which means that airborne creatures deserve some focus. I have had some interesting encounters with birds recently. First, a bird of prey just landed in front of me, which compelled me to reblog a post (https://symbolreader.wordpress.com/2013/06/03/eagle-spirit-feathers/). Then I admired a multitude of swans in the city of Lucerne, Switzerland.

A swan is a symbol of great complexity. The Greeks viewed the swan as sacred to both Aphrodite and Apollo. I am reminded that William Shakespeare was called the Sweet Swan of Avon, a brilliant nickname for this particular genius. Bachelard, whom I quote here after Cirlot, the author of The Dictionary of Symbols, links the swan with the hermaphrodite because its body shape has both feminine and masculine features, a phallic neck and a rounded body. The swan stands therefore for complete satisfaction of desire, which finds its expression in the beautiful legendary swan song, sung before the bird’s death. For alchemists the swan represented a union of opposites and the philosophical Mercurius, the world-creating spirit. Thus the swan is linked with the astrological sign Gemini, which symbolizes the jin/jang duality, and is ruled by Mercury exoterically. The esoteric ruler of Gemini is Venus, which also resonates with the graceful, beautiful and harmonious swan energy. In Richard Wagner’s opera Lohengrin, the title character is an Arthurian knight of the Holy Grail, who travels in a boat pulled by swans. He is supposed to rescue a princess falsely accused of murder. He had got mystical powers from the Grail, but the important condition was to keep those powers secret; the princess was forbidden to ever ask what her rescuer’s identity was. I think this legend really resonates with the sign Gemini, whose special challenge is to learn to keep secrets. Mercury/Hermes was the messenger who was the only god allowed to enter Hades. He would have been severely punished if he had revealed the secrets of the underworld, which means that an evolved Gemini individual must learn the value of words and the value of guarding mysteries.

A further encounter with birds that I had was last Saturday while hiking in the Swiss Alps. There we were surrounded by very peculiar birds, which are black, look like small ravens, but whose beaks are bright yellow and whose feet are red. The birds were very trusting, they begged for food and sat on people’s arms, and they even rested on my friend’s head. At one point the friend looked like the “witcher” with two birds on his arms and one on his head. The bird is called the Alpine chough and has a very peculiar name in my native Polish, which translated into English means a soothsayer.

The local legend claims the choughs are the spirits of mountaineers. This comes as no surprise, as in symbolism birds are in general stand for spiritualization. As a famous and celebrated quotes from the Upanishads goes:

Two birds, inseparable companions, inhabit the same tree; the first eats of the fruit of the tree, the second regards it but does not eat.

As far as I understand this passage, the first bird is like the material, limited, everyday (lower) mind, while the second bird stands for the eternal (higher) mind. In ancient Egypt, the ba (soul, spirit, spiritual manifestation) was represented as a bird with a human head. The ba survived a person’s death carrying the spirit and individuality of the deceased into eternity. 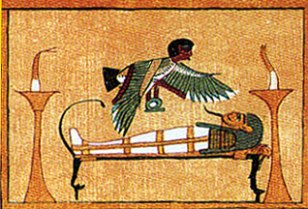 One of my favourite novels has a bird as its central symbol. It was written by a Japanese author Haruki Murakami and is called The Wind-Up Bird Chronicle. It is a story of a man whose life has become sterile, numb and unproductive. He has lost touch with his feelings, has no purpose in life and is supported by his wife while he runs the household. Murakami’s novels are very much like dreams (or labyrinths) you can immerse yourself in, he never plans his plot but just allows the story to reveal itself, which you can see for yourself in the following summary I took from The New York Times:

The story of ”The Wind-Up Bird Chronicle” is a hallucinatory vortex revolving around several loosely connected searches carried out in suburban Tokyo by the protagonist-narrator, Toru Okada, a lost man-boy in his early 30’s who has no job, no ambition and a failing marriage. When his cat disappears, he consults a whimsical pair of psychics, sisters named Malta and Creta Kano, who visit him in his dreams as often as in reality. Then his wife leaves him, suddenly and with no explanation, and he spends his days hanging out with an adolescent girl named May Kasahara, a high-school dropout obsessed with death, who works for a wig factory. At one point, seeking solitude, Toru descends to the bottom of a dry well in the neighborhood, and while he’s down there, he has a bizarre experience, which might or might not be another dream: he passes through the subterranean stone wall into a dark hotel room, where a woman seduces him. This experience leaves a blue-black mark on his cheek that gives him miraculous healing powers. Eventually, he’s rescued by Creta Kano, who reveals to him that she has been defiled in some hideous, unnatural way by Toru’s brother-in-law, a politician whose rising career appears to be propelled by demonic powers.

The wind-up bird is a very mysterious symbol. On the one hand, it is like the soul of the world, being responsible for winding up the spring of the world. It can only be heard by certain individuals who are marked as “doomed,” and in that sense it is menacing. Also, it seems to be a call for rebirth and transformation. Nobody ever sees it, it can only be heard, which would mean that it belongs to the invisible world of the psyche. The novel has very dark elements, exploring the nature of individual and collective shadow. Perhaps the wind-up bird is symbolic of the invisible and deep realms of the soul, which are both dark and light, benevolent and malignant at the same time.

Finally, I’d like to recommend two blog posts related to birds, which I find to be very beautiful. Strange how the collective mind revolves around the same subjects.

19 Responses to Birds on My Mind