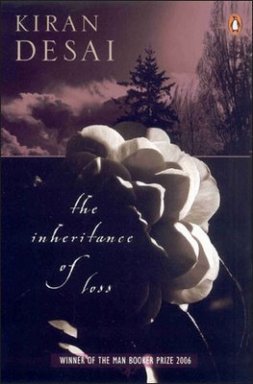 Once a month I meet with a group of fellow expats to discuss a book that one of us has picked for the given months (we take it in turns to select books). The weather is heavenly today, sunny and very warm with a delicate breeze. Such days show Switzerland in her full glory with visible signs of affluence, with all the contended people soaking up the sun, enjoying their food, not thinking yet of another super busy day at work in one bank or another. All of this is in such a huge contrast to the book that we read this month. The Inheritance of Loss by Kiran Desai is no doubt beautifully written but the emotional reaction I had from reading it can be only compared to having my heart ripped out.

Chaos and despair seem to rule the lives of the characters in the novel. One character – Biju – is an illegal Indian immigrant in the United States, who experiences all kinds of wretched misfortunes. It all starts with a harrowing scene of a crowd of Indians applying for visas at the American Embassy: “He dusted himself off, presenting himself with the exquisite manners of a cat. I’m civilized, sir, ready for the U.S., I’m civilized, mam.” If you intend to read the novel, do not read on, please. Biju is miserable in New York, treated like vermin and exploited by a string of his shady employees. He manages to accumulate some money and decides to return to India. Once back in Calcutta, he is robbed by his fellow countrymen; he loses his luggage, all the money plus his clothes and shoes. He returns home to his father barefoot and poorer than he left.

While reading the novel I could not help thinking of the supposed melting pot, the global village that we are said to live in right now. My favourite Turkish writer, Orhan Pamuk, wrote something very interesting after the 9/11 tragedy: people in the West are “scarcely aware of this overwhelming feeling of humiliation that is experienced by most of the world’s population,” which “neither magical realistic novels that endow poverty and foolishness with charm nor the exoticism of popular travel literature manages to fathom.”  One quote from the book sounded extremely poignant to me: “Profit could only be harvested in the gap between nations, working one against the other.” I feel guilty as a person from the West of all the suffering that we, the Westerners, have caused. I am not sure we are ready yet to live in harmonious diversity of cultures. I do not see how we can achieve any kind of redemption just yet.

This entry was posted in Uncategorized and tagged colonization, India, Kiran Desai, post-colonialism, poverty, the East and the West, The Inheritance of Loss, wealth. Bookmark the permalink.

11 Responses to Sunday Book Club: The Inheritance of Loss