Where Do You Go After You’ve Been to the Moon?

In a comedy clay animation film A Grand Day Out, Wallace and Gromit, an inventor and his faithful dog, build a rocket in their basement and fly to the moon to sample some cheese (everyone knows that the moon is made of cheese…). What I adore about this timeless duo is their relationship. Gromit communicates only through facial expressions ad body language and does so ingeniously, like a pantomime artist. Wallace is a bachelor with delightful quirks, a pair of timeless slippers and a cozy waistcoat. They live in a tiny cozy bubble of their own world, building bizarre contraptions together and not needing the outside world to be blissfully happy together.  I think it was a brilliant idea on the part of the film creator to send the two of them to the moon because theirs is a perfectly lunar relationship. They understand each other without words, they feel safe and familiar around each other, bringing each other comfort, warmth and nurturing most naturally, without effort. An astrologer would say that their respective Moons must be in a harmonious aspect to each other, possibly a conjunction or perhaps Wallace’s Moon is on Gromit’s Ascendant.

Creating a magical space together with a special person is a lunar quality. A film which bestows  a similar warm heart feeling is Moonrise Kingdom by Wes Anderson. The two teenagers in love are also lost in their lunar magical kingdom. It is the most delightful film I have seen in years. If there is a strong lunar connection between two people they will create a homey and cozy space no matter where they are, even on the move as the two protagonists of Wes Anderson were. The girl’s suitcase and the boy’s furry hat have got to be the most brilliant lunar symbols I have seen in a movie in many years. The suitcase symbolizes a miniature home, the hat is a subtle allusion to the moon goddess Artemis, the huntress, associated with the dark heart of wild nature.

Picnicking on the Moon

I have been thinking a lot about the Moon in the last few days. It is a special week for all moon lovers:  the so called Super Moon will be visible on 23 June. The moon will appear larger, being closer to the earth and being in the full moon phase. It is interesting that this should happen right after Summer Solstice when the Sun’s power is at its highest. The exceptionally large looking moon will show its potency and importance. In many pagan traditions summer solstice is believed to be a magical time when heaven and earth can be united and when magical opportunities abound. This year with the opposition of the Sun and the Moon this sacred marriage between heaven and earth and between the Sun and the Moon may be fruitful and harmonious because the lights are in balance, neither the Sun nor the Moon are privileged. We may at least hope for a union between our conscious (the Sun) needs and the unconscious ones (the Moon).

In keeping with the moon theme, I decided to see the film Apollo 13 at the weekend. I had not seen it before. I found it quite interesting and it made me think a lot about my long-standing fascination with the moon. The number 13 is very telling: there are 12 solar months in a year but 13 lunar months. Also, right after the launch one of the five engines failed, leaving just four. Let me point out that in astrology five is the number related to the Sun, four to the Moon.  And finally, the three astronauts aboard the ship reminded me of the triad of lunar goddesses, who personified the three phases of the Moon. Thus Apollo 13 was an archetypal lunar mission: the solar (conscious) purpose of walking on the moon was not achieved but the mission was very fruitful from the lunar perspective. Symbolically, the Moon represents the feeling intuitive nature of the individual, emotional needs and emotional security, which to most of us stems from our roots, home and family, understood in many individual ways. The Moon, ruled by the water sign Cancer, is also connected with our habits and reactions, as well as with the unconscious and the rhythm of life (since all life originated in water – think of the amniotic fluid but also of the ocean where evolution of all species started). During the Apollo 13 mission, nothing tangible was accomplished that might be labeled as success from a conventional perspective, but it was not about the mission but about the people and their essential humanity: fear of survival, rapidly changing emotions, hope, closeness, attachment and love. Being able to return to earth after all instruments had been broken required a great deal of lunar intuition. Another lunar theme is the collective effort that the whole operation required: there was not a single successful solar hero but a collective hero with a thousand faces. Also during the Apollo 13 mission astronauts suffer all kinds of physical symptoms, reminding us that the symbolism of the moon is first and foremost related to the body and to Mother. “The human being is not the lord of beings, but the shepherd of Being,” wrote the philosopher Martin Heidegger. If we are reminded of our own mortality through suffering bodily symptoms, we get reconnected with the moon principle. We should extend the care of our bodies to the care of the mother earth and all living beings. The astronauts looking down towards the earth always expressed similar sentiments: how fragile and beautiful our planet is.

Like every archetype, the moon has its dark side (literally, in this case). Lunar darkness has to do with lunacy, depression, hysteria and compulsiveness – the mythical maenad within. The maenads, whose name meant “the raving ones,” followed the god Dionysus and were associated with orgiastic frenzy and a total lack of control. They were the antithesis to culture and civilization. They were said to devour raw flesh and they murdered King Pentheus by tearing him to pieces because he had banned the worship of Dionysus. There is uncontrollable lunar wildness in every one of us and the position of the astrological Moon may reveal more details on the extent of it. 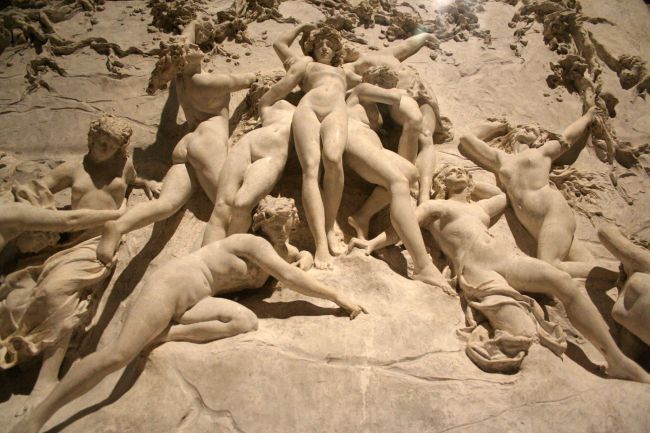 Gustav Dore, Maenads in a Wood

There is a spellbinding book by Andrew Smith called Moondust: In Search of the Men Who Fell to Earth. There he writes about the twelve astronauts who took part in all Apollo missions and he interviews the nine who were still alive at the time he was writing the book. I have no doubt that the lives of the moon astronauts were closely connected with the moon symbolism. Can you get so close to the moon and not be affected by it? Buzz Aldrin, the second man on the moon, has battled with depression and alcoholism all his life. ‘He resents not being the first man on the moon more than he appreciates being the second,’ as a fellow astronaut observed. If it is true, it is a pity that the need to be a solar hero, to be the first one, would overshadow a life like this. However, I have heard that he turned his life around at an older age. Charlie Duke (Apollo 16) became a drunken bully who beat and terrorized his children and his wife until he and his wife, Dotty, found God and religion. Almost all of the astronauts experienced a sort of an epiphany. While Ed Mitchell returned in his Apollo 14 capsule, he glimpsed ‘an intelligence in the Universe and felt connected to it’. He then established the Institute of Noetic Sciences. An amusing tidbit is connected with Nepal, where it is believed that the dead reside on the moon. When the Apollo 14 veteran visited there he was constantly asked “So did you see my grandmother?” which exasperated him.

The moon archetype is also connected with art and imagination. Alan Bean of Apollo 12 became a painter and quit space. His subject matter is the moon and the astronauts in space. I quite like this one, called Space Reaching.

Another astronaut, Jim Irwin, claims that God spoke to him at the feet of the Apennine Mountains. He left NASA for the Church. All astronauts spoke of mystical unity of all humankind that they experienced in space. But as Smith notices bitterly: “A lot happened out there. The postflight divorce rate was, in more than one sense, astronomical.” It is hard to rationalize such a kind of transformation that all of them underwent. I naturally put it down to the mysterious power of symbols and I see how their lives are connected to the moon symbolism.

I will be staring at the moon this coming weekend. And if you want to read something very weird about our satellite, take a look at an article called Are We Food for the Moon?, which summarizes the ideas of Gurdijeff and Blavatsky about the Moon being a parasite  and portraying humans as food for the Moon. Madame Blavatsky called the moon soulless and lifeless. But how can something so beautiful not have a soul?

47 Responses to Where Do You Go After You’ve Been to the Moon?