Symbolism of the Island

1.“Theseus is cruel because he leaves Ariadne on the island of Naxos. … Just a beach lashed by thundering waves, an abstract place where only the seaweed moves. It is the island where no one lives, the place where obsession turns round and round on itself, with no way out. A constant flaunting of death. This is the place of the soul.”

2.“Be not afeard. The isle is full of noises,
Sounds and sweet airs that give delight and hurt not.”

3.“O place of many a mystic sacrament!

Infusing spirits with an amorous mood.

Worshipped from of old by every nation,

Sighs of souls in loving adoration

Charles Baudelaire, “The Voyage to Cythera”

4.”I’ve looked into the eye of this island, and what I saw was beautiful.”

John Locke, a character in “Lost” 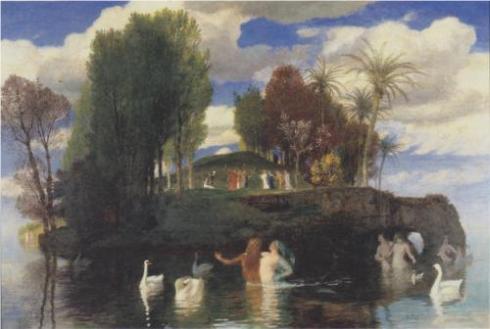 Arnold Böcklin, The Island of Life

In Psychology and Alchemy, Carl Gustav Jung wrote that “only in the region of danger (watery abyss, cavern, forest, island, castle, etc.) can one find ‘the treasure hard to attain’ (jewel, virgin, life potion, victory over death).” Islands are one of the most treasured motifs both in myth and literature. Jung’s quote shows his amazing intuitive grasp of island’s significance: it is both beautiful and dangerous. Islands can be incredibly scenic but their detachment from the mainland may create a feeling of entrapment. Island inhabitants define their identity chiefly as Islanders: they have their own unique cosmos there and any newcomers are perceived as intruders. Because they are away from the land of law and regulations, morality may break loose on them and people can get tested, as you may remember from the famous novel “Lord of the Flies.” As final resting places, most notable example being the island of Avalon, islands have a funerary, eschatological quality about them. Where there is death, there must be transformation. Whoever comes to an isolated island, does not leave it as the same person: islands are both safe havens and dangerous areas of upheaval; safe wombs and insular alchemical vessels of transformation. Time flows differently on islands, because they are places torn out of the conventional time space continuum. Odysseus found that out when he spent seven long years trapped on Ogygia by the nymph Calypso. Ogygia was a primordial island, which attracted visitors like an insect eating plant only to trap and devour them:

“No one was ever lonelier than Calypso. … Divine hostess, time denied her any guests. … Calypso’s distance from the world wasn’t only to be measured across the huge expanse of the waters but first and foremost across time. … Calypso lived at a point of cosmic intersection: Ogygia was a primordial island… 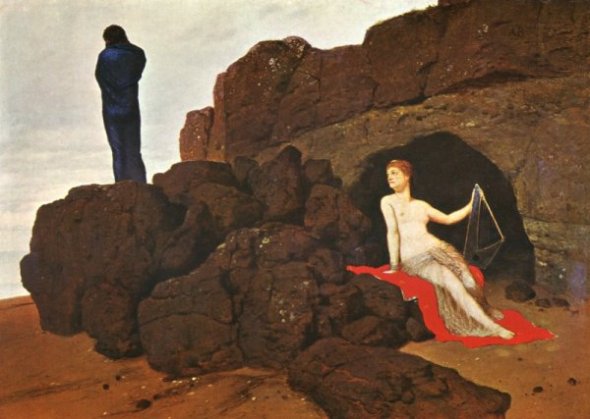 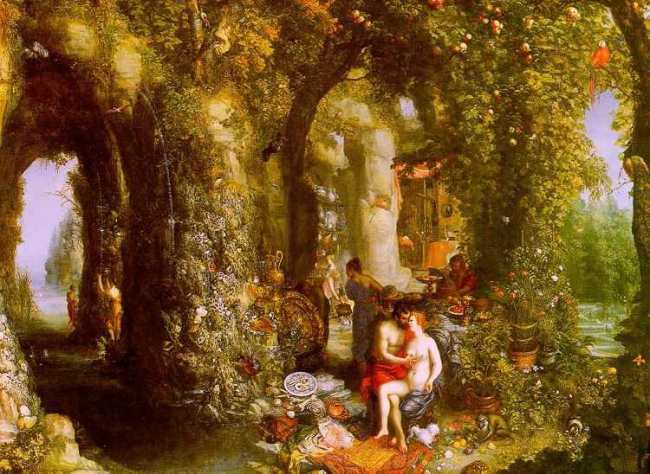 Jan Brueghel the Elder, “Odysseus and Calypso” (a completely different vision than that of Böcklin)

Calypso means “She Who Conceals Things.” Concealment was her passion, cloaking something in a veil, like the veils she sometimes wore around her head. … Toward Calypso, Odysseus felt the same attraction Gilgamesh had felt for the barmaid Siduri, for the woman who pours drinks behind a counter and talks, listens. What did the attraction conceal? Odysseus knew what would later be forgotten: it concealed the woman who welcomes us at the entrance to the kingdom of the dead. …  The conversation with the woman who pours the drinks goes on and on through an endless night, unthreatened by any dawn on the window-panes. …

Odysseus spent seven years with Calypso… They were years when time sucked him backward into a fabulous prison that was also a floating sepulcher.”

Calypso, the sad and lonely nymph, seems to be at one with the island she inhabits. The symbolism of islands definitely has an intimate connection with the feminine. Islands are like precious jewels scattered on ocean waves, like treasure chests waiting for brave heroes to explore them. They provoke longing and wishful craving.

Islands continue to inspire writers, TV producers and movie makers. The show that caught my attention in the last years was “Lost,” which I am the staunchest fan of. In “Lost” the island is an entity, a protagonist in its (her?) own right. At one point the island falls off the temporal axis and a group of characters start travelling in time. The series itself is wonderfully inventive and plays on numerous cultural tropes, myths and archetypes. It seems to be a place where accelerated character growth takes place, where characters get in touch with their spiritual centre, and where they can redeem their past and carve out a new identity for themselves. While Robinson Crusoe did everything to recreate a full civilization on the island where he was shipwrecked (he was obsessed with keeping track of the time passed, for example), the characters in “Lost” get in touch with the wildness of nature that resides within themselves. Like the game of backgammon, featured in the first episode, the microcosm of the Island is s stage where dark and light forces interplay, intermingle, oppose and attract each other. 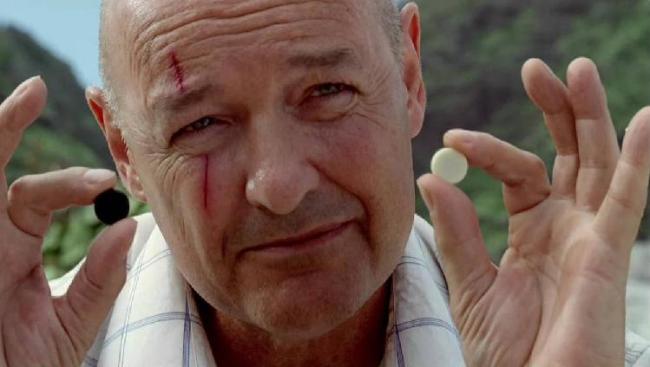 John Locke, a character in “Lost”

The island in “Lost” has healing powers which emanate from the Heart of the Island (a source of water bathed in brilliant white light). 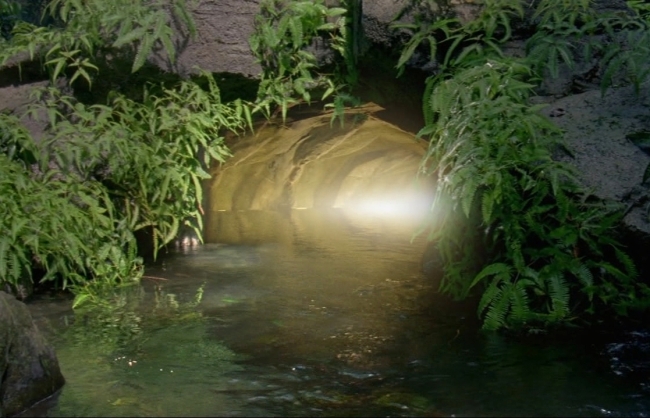 The Heart of the Island

This source of life, death and rebirth needs to be protected. The Island also functions as a sort of a “cork” that contains darkness and evil and prevents it from spreading. It is extremely ancient and was populated by Egyptians and Sumerians in the distant past. It periodically changes its location, which again points to her archetypal character as a place outside of space and time. As such it is similar to Atlantis, which also existed beyond the frontiers of known space and time. If it really existed, then the cradle of our civilization and the seed of our inner wisdom originated on a mythical island.

Northrop Frye, a literary critic, referred to islands as “points of epiphany.” On an island, away from their everyday circumstances, mythical and literary characters can become free of themselves in order to find themselves. I have recently read a short story by one of my favourite authors: it was “The Tale of the Unknown Island” by Jose Saramago. It is an enchanting fairy tale in which the main character wants to discover an unknown island but has no boat and petitions the king of his country to give him one. In a famous poem the poet John Donne says that no man is an island, but from Saramago’s tale we can surmise that every person is like an unknown island both to themselves and others. As the cover of the book suggests, the mystery of the island cannot be solved without a woman. 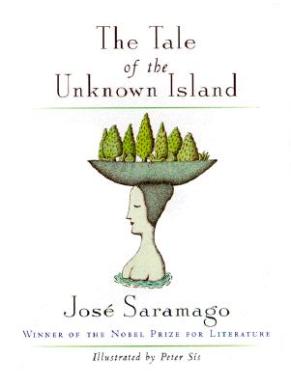 37 Responses to Symbolism of the Island