Your Golden Hair Margeurite: Hair as a Symbol 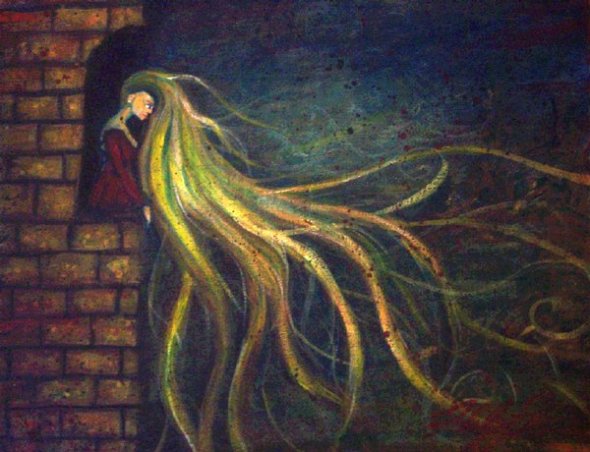 In an old pagan ritual known as the Maypole dance, on the Eve of May Day, female dancers circled the pole the counter-clockwise direction, which is sacred to women and associated with the moon while male dancers danced in the other direction, that of the sun. In Women’s Encyclopedia of Myths and Secrets, Barbara G. Walker summarizes that “the resulting braid represented interpenetration of masculine and feminine powers.” In Hindu mythology, ‘hairs, like the threads of a fabric, symbolize the ‘lines of force’ of the universe” (Cirlot, Dictionary of Symbols). Throughout the ages hair has appeared as a potent symbol in myth, literature, culture and religion. The maypole dance ritual suggests that it is significant equally for men and women. It is enough to think of the romantic rituals of exchanging talismans with locks of hair between lovers. The supernatural strength of the biblical Samson (Hebrew for “man of the sun”), the one who defeated lions but was lost because of a woman, followed from his abundant hair.

Hair like the mane of a lion was also extremely popular in France of Louis XIV, the Sun King. He was the one who propagated the bizarre fashion in Europe, channeling the Greek god Apollo celebrated for his golden locks, symbolic of the golden rays of the sun. In Indian mythology, as Walkers says:

“The Indian god Shiva, who is the personalized representation of the creative and sexual energy of the universe, is always represented as having a mass of long, tangled, piled-up hair on his head.“

On female side of the symbolic history of hair, Berenice stands out, wife of the Egyptian ruler Ptolemy Soter III. She sacrificed her beautiful amber-coloured hair to ensure that her husband returns home safely. Her tresses were left on the altar of Aphrodite for the night and had been mysteriously gone by the morning. The gods had put them in the sky as a beautiful constellation Coma Berenices. 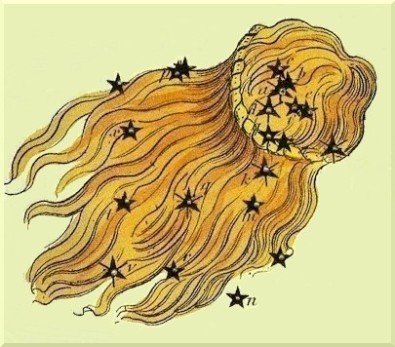 The symbolism of the Great Mother and witchcraft has always been closely intertwined with hair symbolism. Barbara G. Walker writes:

“An Egyptian found salvation by identifying himself with Osiris, for whom the Goddess made resurrection-magic with her hair: He is found with her hair spread over him; it is shaken out over his brow. When Isis put on mourning garments for Osiris, she cut a lock of her hair to preserve his soul. … When Isis restored vitality to the dead Osiris, entitled the Still Heart, she created his new life with her hair, made his heart beat again and his penis move so she could conceive his reincarnation, Horus. She produced warmth from her hair, she caused air to come …. She caused movement to take place in what was inert in the Still Heart, she drew essence (semen) from him, she made flesh and blood, she suckled her babe alone. She further protected her Divine Child by shaking out her hair over him.”

Witches were feared by the Grand Inquisitors, who always ordered to shave their hair off. Walkers adds: “Gypsies said a witch could be known by her hair, which grew straight for three or four inches, then began to wave, like a waterfall bouncing over rocks.” 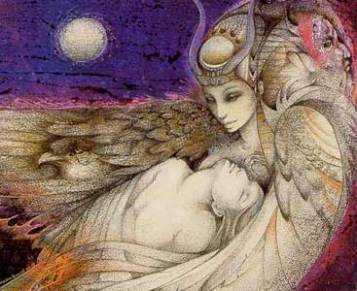 At the hour of death, The Great Mother’s hair will cast its shadow over our souls. This is why comets were believed to portend doom: it was Great Mother, the spinner and weaver of our fates, that reminded us of our mortality and the inevitable death of old forms. In Homer’s Odyssey, Circe’s braids signified her power over metempsychosis.

I thought of hair today on the eve of Solar Eclipse, as I have heard that we are about to “celebrate” the anniversary of the establishment of the Nazi concentration camp in Auschwitz (Oswiecim), Poland. I remembered my first visit to the museum where my attention was caught by mountains of human hair on display behind glass. So unbelievably poignant: children’s hair, women’s hair, hair of all colour, even a plait can be spotted like the one from w famous poem by Tadeusz Rozewicz. A famous last stanza of the poem “Pigtail” that every Polish child learns about at school says:

“In huge chests
clouds of dry hair
of those suffocated
and a faded plait
a pigtail with a ribbon
pulled at school
by naughty boys.”

The most moving poem on the Holocaust I have ever read, however, was written by Paul Celan, a Romanian poet, who wrote in German. He lost both of his parents in the Holocaust, himself surviving the camp. He never recovered from his mother’s death and his whole poetry was a cry of mourning for his loss. “The Death Fugue” is his most famous poem and one you simply cannot forget once you have read it. Note the symbolism of golden hair that becomes ashen hair. The title and the form of the poem is evocative of the habit of the Nazis to make the Jews play music at their own executions.

23 Responses to Your Golden Hair Margeurite: Hair as a Symbol