The Secrets of the Odyssey (8): the Sirens, Scylla & Charybdis, and Thrinacia 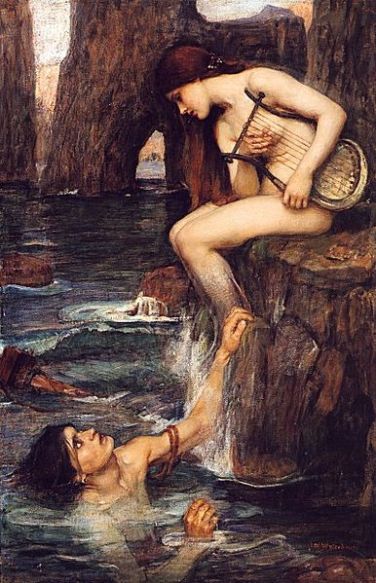 Reading the Odyssey in a superb translation of Robert Fitzgerald is like listening to the most delightful music. No interpretation can possibly replace the sheer pleasure of experiencing Homer’s talent. The opening lines of Book XII read:

“The ship sailed on, out of the Ocean Stream,

riding a long swell on the open sea

for the Island of Aiaia.

has dancing grounds there, and the Sun his rising;

but still by night we beached on a sand shelf

and waded in beyond the line of breakers

On the island of Aiaia, Circe receives Odysseus and his companions, who have returned from Hades, with a lavish banquet. Later at night she tells Odysseus in great detail about his next adventures, what perils await him and what precautions he must take. It seems that at this moment Odysseus is endowed with a higher understanding by the Goddess. But although his mind is clear about the right course of action, for various reasons he will not be able to prevent the destiny from “devising ill,” as he himself puts it later. It seems that a clear awareness of what the future will bring cannot stop the events from unfolding. Circe advises Odysseus about the Sirens and then about the monsters Scylla and Charybdis. The following powerful exchange between them seems to be crucial to me for Odysseus’ spiritual development and gaining higher understanding:

“‘Only instruct me, goddess, if you will,

how, if possible, can I pass Kharybdis,

or fight off Skylla when she raids my crew?’

Swiftly that loveliest goddess answered me:

‘Must you have battle in your heart forever?

will you not yield to the immortal gods?

That nightmare cannot die, being eternal

evil itself—horror, and pain, and chaos;

there is no fighting her, no power can fight her,

all that avails is flight.”

She predicts that the monster will devour six of his companions but this knowledge of it will not prevent his heartache after this loss. The crucial lesson that Circe seems to be imparting to Odysseus is that we are powerless in the face of the archetypal godlike forces. Life is often like walking a narrow path between Scylla and Charybdis. Acknowledging the power of the gods and doing out uttermost to survive is often the only course of action left for mortals. I will speak of the monsters later, for now let the focus fall on the enchanting temptresses, the Sirens. Circe had warned Odysseus that “the Seirênês will sing his mind away on their sweet meadow lolling,“ and she had offered him a choice: he had to pour wax into his comrades’ ears to prevent them from hearing the Sirens but he could go either way: block his ears with wax or listen to the song of the Sirens while being tied to the mast so that he does not follow them to certain death. Knowing Odysseus’ ever curious character he surely chose the latter option, lying to his companions that Circe had ordered him to do so. The Sirens sang:

Charmed out of time we see.

No life on earth can be

Hid from our dreaming.”

In Homeric Moments, Eva Brann offers her interpretation of this episode:

“The Sirens offer to ensnare Odysseus by a flattering and seductive song of nostalgia, ‘return-ache.’ They claim that men who hear it sail away the wiser, but in fact no one gets away. He too will forget the Return that leads homeward to wife and child by changing the direction of his longing to the past. He will molder in pity for his lost comrades-in-arms and in self-pity for the glory gone, wallowing in veteran’s reminiscences, aching to turn back to Troy.”

I think that the Sirens personify the charming and seductive face of the sacred feminine energy, the beauty of poetry which sings of the glorious past. Their song is like a regressive pull of the eternal ocean – the realm of myth and dreams. As daughters of either Melpomene (Muse of tragedy) or Terpsichore (muse of choral song ad dancing), the Sirens embody the dark and sad energy on the one hand, and the trance-like oblivion on the other. During this part of Odysseus’ journey the Sun passes Libra and Scorpius. It is worth remembering that in antiquity the stars of Libra were an extension of the constellation of Scorpio and were called the Claws of Scorpius. We read in Homer’s Secret Odyssey by Kenneth and Florence Wood:

“As the sun leaves Virgo it passes through the Claws of Scorpius, where three stars alpha, beta and gamma Librae make an excellent ‘island’ home for the temptresses. The Sirens sit in a grassy meadow and the star Beta Librae is said to have a greenish tinge …”

Scorpius links the Sirens with the death force (Thanatos) and darkness that pulls and sucks all creation into it. As Pablo Picasso put it, “Every act of creation is first an act of destruction.” Thanatos, the death drive, represents a push towards extinction and is a brother of Eros, the loving and creative force in the universe. With their alluring song, the Sirens bring ecstasy and death. The two forces are always present in every artistic endeavor. “Seeing out of time” denotes the Sirens’ ability to see the past, the present and the future. They are as mysterious as the Sphinx and almost as fascinating; no wonder they have stirred the imagination of countless readers of the Odyssey although the passage dedicated to them is surprisingly short, taking into account its cultural impact.

The next stage of the journey is extremely traumatic for Odysseus. The moon moves into its dark period and the hero has to pass through a narrow passage between two deadly monsters: Scylla and Charybdis. Meanwhile, the sun passes through the autumn equinox. The Woods point out that in Homer’s times the autumn equinoctial point lay between Libra and Scorpius. During the spring equinox six months before Odysseus had encountered Polyphemus also losing six of his travelling companions. Charybdis is a deadly whirlpool, a gigantic mouth engulfing anything that came near. A huge fig tree marks the dangerous spot where she resides:

“Like Scylla, she was once a beautiful sea nymph, a naiad, and helped her father Poseidon to increase his kingdom by flooding the land. But her uncle Zeus, the god of the earth and sky, was furious and turned her into a hideous mouthlike chasm. She was condemned to always be thirsty and to suck in seawater three times a day and regurgitate it with her thirst unsatisfied.”

Scylla, a six-headed devouring monster with her “deep gullets of black death,” who resides in an underwater cave, is associated with the constellation of Scorpius by the Woods:

“As a metaphorical description of Scorpius, Homer’s imagery of Scylla’s head protruding menacingly out of her cave is reflected in the same proportions in which Scorpius seems to rise out of the Milky Way. …

As with the six men eaten by the Cyclops at the spring equinox, these six victims are important in balancing the days of the solar and lunar years … In the absence of Homer using fractions of numbers, Scylla’s six victims, as with those of Polyphemus, can be seen as the rounded-up five and a half days that the lunar calendar falls short of the solar calendar between one equinox and the next.”

According to myth, Scylla was once a nymph who was seduced by Poseidon. Her tale is that of bitter jealousy accompanied by murderous instincts. In her jealous rage, Poseidon’s wife Amphitrite filled Scylla’s bathing pool with poisonous herbs, which turned the nymph into a monster.

The unavoidable death of his six companions was extremely traumatic to Odysseus, as he relates:

“She ate them as they shrieked there, in her den,

in the dire grapple, reaching still for me—

and deathly pity ran me through

at that sight—far the worst I ever suffered,

questing the passes of the strange sea.”

Although he had been warned about this loss by Circe he could have done nothing to avoid it. In grim moods the travelers sailed on until the island of Thrinacia appeared. Again, the dire warnings of both Teiresias and Circe about not killing Helios’ cattle grazing on the island were to no avail. While Odysseus was distracted looking for alternative nourishment for his crew, they were too hungry to wait and they feasted on the forbidden meat. Odysseus’ men proved thus once again that they do not match his steady resolve and higher consciousness: again they have succumbed to their simple earthy desires. Eva Brann emphasizes how more alienated Odysseus was getting from his companions, the more awareness he gained:

“He is disciplined, hardy, and mystifying to his men in his hidden purpose to see, hear, experience, know, and apprehend, the world imaginatively. To them his leadership must look like aimless drifting into continual hazards. They have been falling away from him for quite a while now: They are urgent where he is dilatory, they are slack where he is impulsive. They depend on him but distrust him; he cares for them occasionally but not about them steadily.”

Meanwhile, the Sun has moved into the sign of Sagittarius. Zeus, spurred by Helios, punishes Odysseus’ companions by causing a violent storm in which they all drown while Odysseus drifts in the ocean on what remained of his last ship. He will eventually reach the island of Calypso but not before he is drawn towards the deadly Charybdis again. This time he holds on to the fig tree, which saves his life. Interestingly, Barbara Walkers, the author of The Women’s Encyclopedia of Myths and Secrets, says that the fig tree is a well-known symbol of the goddess.

The Goddess Hathor in a Sycamore fig tree

The Bodhi tree, under which Buddha reached the enlightenment, was in fact a species of a fig tree. Also Babylonian Ishtar took the form of the divine fig tree. Bereft of all his companions and earthy possessions, Odysseus is ready to meet the most mysterious goddess of all, the veiled High Priestess Calypso, who will offer him immortality. Unlike Buddha, he will reject this gift in favor of a life with his beloved Penelope on Ithaka, his home. 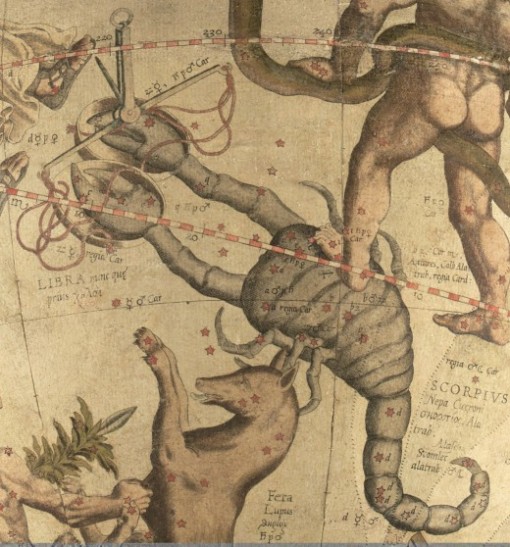 Scorpio and Libra drawn on a Mercator globe in the 1500’s, via http://hubpages.com/hub/the-constellation-libra

29 Responses to The Secrets of the Odyssey (8): the Sirens, Scylla & Charybdis, and Thrinacia