Tear Down This Wall: on Psychological Defenses

“If personality is an unbroken series of successful gestures, then there was something gorgeous about him, some heightened sensitivity to the promise of life, as if he were related to one of those intricate machines that register earthquakes ten thousand miles away. This responsiveness had nothing to do with that flabby impressionability which is dignified under the name of the ‘creative temperament’–it was an extraordinary gift for hope, a romantic readiness such as I have never found in any other person and which it is not likely I shall ever find again. No–Gatsby turned out all right at the end; it is what preyed on Gatsby, what foul dust floated in the wake of his dreams that temporarily closed out my interest in the abortive sorrows and short-winded elations of men.”
F. Scott Fitzgerald, “The Great Gatsby”

Each of us has an innocent, soft, vulnerable core that wants to be nourished, cherished and protected. In Aion, Carl Jung spoke of the inner Christ, who personifies the archetype of the Self:

“He is in us and we in him. His kingdom is the pearl of great price, the treasure buried in the field, the grain of mustard seed which will become a great tree, and the heavenly city.”

This radiant inner core requires protection. The walls that our selves build around it often hide it so well and so deep that its light becomes dim and muffled. Every disappointment, injury, trauma strengthens the defenses and weakens the light. This juxtaposition of softness and hardness, victim and perpetrator, innocence and experience is shown marvelously by Fyodor Dostoevsky in an episode of his Brothers Karamazov called “The Grand Inquisitor.” In the story, Jesus returns to Earth to Seville at the time of the Inquisition. People recognize him immediately and flock to be near him:

“The Sun of Love burns in His heart, and warm rays of Light, Wisdom and Power beam forth from His eyes, and pour down their waves upon the swarming multitudes of the rabble assembled around, making their hearts vibrate with returning love. He extends His hands over their heads, blesses them, and from mere contact with Him, aye, even with His garments, a healing power goes forth.”

The Grand Inquisitor (“…a tall, gaunt-looking old man of nearly four-score years and ten, with a stern, withered face, and deeply sunken eyes, from the cavity of which glitter two fiery sparks”) has him arrested and interrogates him with the intention of sentencing him to death. The organized religion has lost the true spirit of Christianity; in a touching ending of the episode the Inquisitor, after a long speech to which Jesus listens silently, has made his decision and wants Christ dead. But he changes his mind when Christ kisses him: 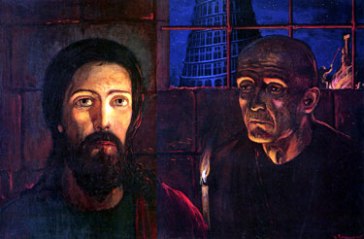 “He bends towards him and softly kisses the bloodless, four-score and-ten-year-old lips. That is all the answer. The Grand Inquisitor shudders. There is a convulsive twitch at the corner of his mouth. He goes to the door, opens it, and addressing Him, ‘Go,’ he says, ‘go, and return no more… do not come again… never, never!’ and—lets Him out into the dark night. The prisoner vanishes. … The kiss burns his heart, but the old man remains firm in his own ideas and unbelief.”

The psychological factor personified by the Grand Inquisitor seems to be the polar opposite of innocence, light, softness and goodness, but yet in this scene the opposites unite if only for a moment. The dramatic split is temporarily healed. Donald Kalsched, a Clinical Psychologist and Jungian Psychoanalyst specializing in trauma, talks about psyche’s protective mechanisms, our very own inner Grand Inquisitor, in an online interview (http://www.cgjungpage.org/learn/articles/analytical-psychology/187-an-interview-with-donald-kalsched):

“It’s been known, for example, that there’s a ‘tyrannical inner object’ that has a great deal to do with psychological depression, with harsh super ego attack. Jung called it the negative animus. Odier calls it the ‘great malevolent beings in the psyche.’ Fairbairn calls it the internal saboteur, and Guntrip, the antilibidinal ego. What may be new in the book is my effort to show this as one half of what I call the ‘archetypal self care system,’ and that it’s related to early trauma. If my hypothesis is correct, we can see this in dreams and other unconscious material as psyche’s primitive defense. Building on what Fordham called ‘defenses of the Self,’ I suggest that in cases of early trauma, we see a remarkable wisdom in the psyche to assure survival of what I call the imperishable personal spirit, the essence of the person.”

He goes on to discuss the analogy of how the immune system functions and how psyche erects its own protective walls:

“The point about the immune system is that it’s a killer! We’d all be dead if we didn’t have killers inside us, called white cells or T cells. The immune system is capable of recognizing non-self elements like viruses and attacking and killing them. Some of the auto-immune diseases like AIDS are particularly problematic because of the trickster element. The system ‘thinks’ it’s attacking something dangerous, but its ‘enemy’ is actually a vital aspect of the body. Let’s imagine a very young child whose dependency needs are attacked or ignored by an over-burdened parent. Pretty soon, the child internalizes the parental attitude toward its own neediness and starts to attack itself as soon as its dependent need is felt. Such children become self-sufficient too early. Ronald Fairbairn has also taught us that they use their own aggression internally to defend against this need. This becomes a defensive structure. It continues to operate later when the person, as an adult, is in a situation which calls for opening up in an intimate relationship and exposing vulnerability to a love partner. The defense will see that opening up process just as it saw it when the person was eighteen months old, when the opening up was immediately followed by humiliation or shaming. So it will attack the inner world in the same way that the auto-immune system will attack the body’s tissues, and it will cut off relatedness to self and other and make the person defensive.”

Hubert Robert, “Demolition of the Bastille”

In every ruthless person there is innocence and vulnerability, continues Kalsched:

“You get an inner world that’s both brutal and sentimentally weak at the same time. It’s like Hitler, who cried when his canary died; that kind of sentimental emotion which is infantile. Frequently people who have suffered a lot of early trauma and don’t know it are extremely conscious of all the injured animals and innocent creatures in the world. What they don’t realize is that there’s an innocent creature in themselves that’s been injured that needs attention while they’re taking care of all of the wounded people or animals in the world.”

I think Rumi’s famous words are ideal to finish my post today:

“Your task is not to seek for love, but merely to seek and find all the barriers within yourself that you have built against it.” 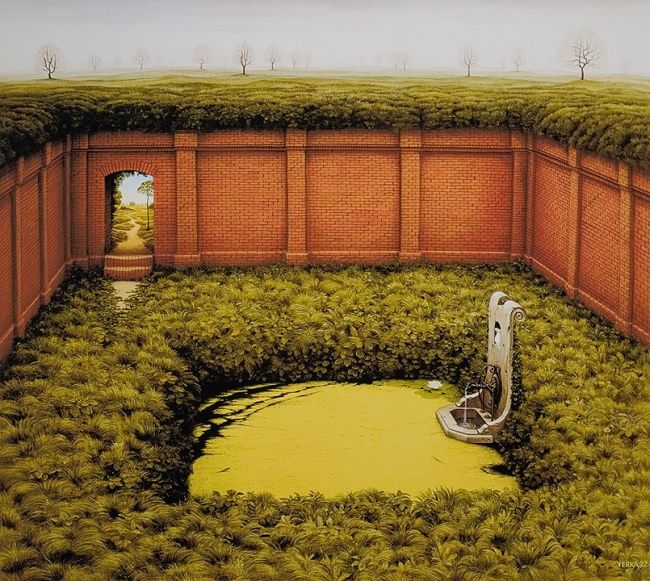 20 Responses to Tear Down This Wall: on Psychological Defenses