“Sometimes, too, just as Eve was created from a rib of Adam, so a woman would come into existence while I was sleeping, conceived from some strain in the position of my limbs. Formed by the appetite that I was on the point of gratifying, she it was, I imagined, who offered me that gratification. My body, conscious that its own warmth was permeating hers, would strive to become one with her, and I would awake. The rest of humanity seemed very remote in comparison with this woman whose company I had left but a moment ago: my cheek was still warm with her kiss, my body bent beneath the weight of hers. If, as would sometimes happen, she had the appearance of some woman whom I had known in waking hours, I would abandon myself altogether to the sole quest of her, like people who set out on a journey to see with their own eyes some city that they have always longed to visit, and imagine that they can taste in reality what has charmed their fancy. And then, gradually, the memory of her would dissolve and vanish, until I had forgotten the maiden of my dream.” 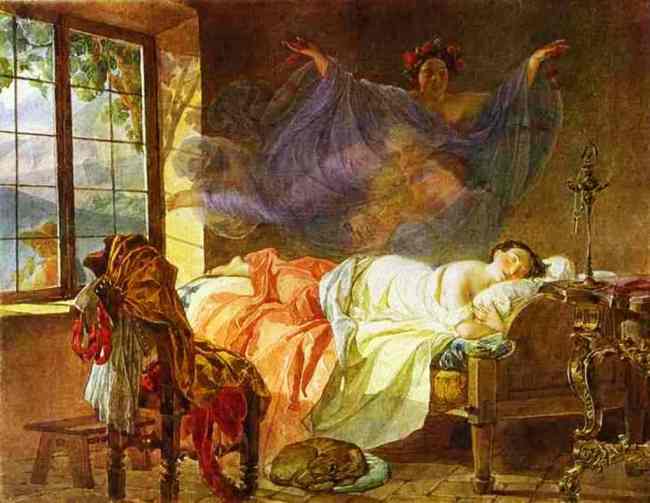 Karl Briullov, “A Dream of a Girl Before Sunrise”