A Thunderous Epiphany: How Symbols Are Created

“Symbols throw us across a spiritual abyss. When contemplating a sacred work of art, it may feel as if a great divide separated us from the Holy hidden in images. Then, our vision expands, and the image becomes transparent to its transcendent source. We are thrown together with the Sacred in a fleeting moment of epiphany…

The expressions just used were not ill-chosen. If we take the time to trace the etymology of the word ‘symbol’ through its Attic Greek antecedent, symbolé, we discover that it means literally to throw (balló) two things together (sym).

What symbols throw together, essentially, are sacred and mundane experiences, making them one.

The process of symbolization occurs by overwhelming necessity: the mind, over-awed and frightened by a profound and soul-shattering experience of the Sacred, desperately seeks those objects which can, by virtue of their structure, contain such a momentous outpouring of the Divine – which is threatening otherwise to blast apart the very vessel into which it is being poured. At such a moment, an object is sought for its power to appropriately contain the awesome appearance of the Numinosum, and so, a symbol is created.

In the earliest ages of mankind, the Sacred was experienced in this way – as a thunderous epiphany that led per force to the creation of a symbol. Then, a series of symbols were strung together by ancient myth, with certain Threshold Images at their nadir, to become our hieratic works of art. And, as we survey the many masterpieces of ars sacrum created over the course of history, we find that most offer us symbolic doorways, constructed by the visionary artists of old, as images to enter through, and then left behind for succeeding generations to attempt in crossing.

The symbols of the past are not totally outdated, antiquated and useless; they resonate still with unseen powers. Yet, it is only by bringing our own lives, preoccupied with its present conflicts and needs, to these eternal symbols, that the forms forgotten by time may thus be enlivened, and our own lives may be transformed thereby – informed once more by their ancient inhering power.”

L. Caruana, Enter Through the Image: The Ancient Image Language of Myth, Art and Dreams, Recluse Publishing 2009, pp. 111 and 128 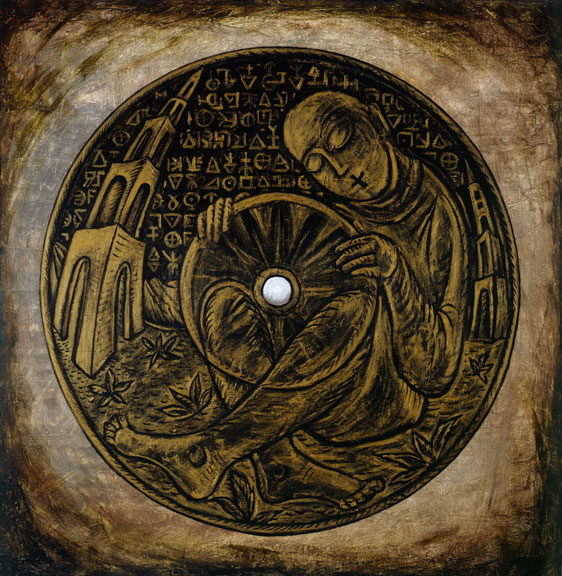 18 Responses to A Thunderous Epiphany: How Symbols Are Created