“Phaethon [struck by Zeus from the chariot of the Sun], flames ravaging his auburn hair, falls headlong down, a streaming trail of light, as sometimes through the cloudless vault of night a star, though never falling, seems to fall.”

Meteor showers, little balls of rock that appear to be balls of fire, can be so enchanting. On December 13-14 each year the Earth passes the debris of an extinct comet called 3200 Phaethon, causing a very bright and luminous meteor shower called the Geminids because they appear to be coming from the constellation Gemini. A week before Winter Solstice, which marks the Sun’s rebirth, we may reflect on the myth of how Phaeton, the son of the Sun god Helios, fell from short-lasting grace:

“While living with his mother, Klymene, he was insulted by other boys who said,‘The Sun is not really your father. You’re a bastard.‘ So he went off to prove his identity, journeying through Ethiopians and Indians until he came to the palace of Helios. His father promised anything he wanted, but regretted it when Phaethon made his choice. Nevertheless, he taught the boy to drive, telling him not to fear the dizzying heights or the beasts he would encounter in the sky – Bear and Scorpion, Lion and Bull. Phaethon was supremely happy. He mounted the gem-studded chariot and flicked his whip on the backs of its four shining horses … . But the steeds of the Sun ran off as though no driver ruled them … Careening through the sky, Phaethon froze in terror and lost control. The burning bright chariot of the Sun plunged close to earth. Mountains and cities were set ablaze, rivers and seas dried up, the earth cracked open. Gaia called on Zeus for relief. His only solution was to strike down Phaethon with a thunderbolt. The boy plummeted into the Eridanos. His sisters, weeping continually after on the river’s banks, were turned to poplars. Their tears flowed out of the trunks and turned to amber.“

A Jungian reading of the tale that immediately springs to mind would go along the lines of the ego being flooded by the contents of the Self (i.e. the total personality, the psyche as a whole encompassing both conscious and unconscious elements), symbolized by the true Sun God Helios (and by the Sun). The inflation of the ego that happens in this myth consists in Phaeton deluding himself that he can safely navigate the numinous, divine, archetypal powers, which are in fact totally out of his control. Such hubris and ignorance bring about his downfall. The sign Gemini is the mental matrix of all polarities, which are interestingly juxtaposed in Phaeton’s myth. The unfortunate mortal sun of an immortal father, struck by Zeus‘ thunderbolt, tumbles down, down, and down to meet the solid temporal realm of Gaia, and the moistness of the river Eridanos.

The mourning of his sisters, who get turned into poplars, leads to the creation of a very beautiful stone – amber. The poplar leaf, as Cirlot notes in his Dictionary of Symbols, has two sides, which have different shades of green: “Thus, it becomes the tree of life, bright green on the side of water (moon) and a darker green on the side of fire (sun).”

The poplar becomes thus yet another representation of duality, consistent with the Gemini theme. Because Phaethon partook in the glory of the Self (if only for a moment), he can be likened to a brief flash of brilliant light, a beacon of genius, even a theophany (the appearance of a god in a visible form to a human being). Since his name in Greek means to “burn, shine,“ some authors, including Plato, connect the myth to the cosmic disaster stories, such as the destruction of Atlantis caused by a comet (or a meteor) colliding with the earth. 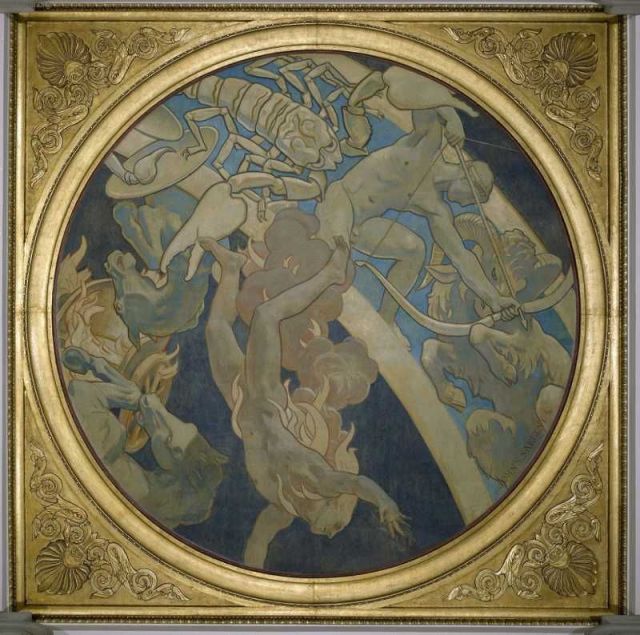 John Singer Sargent, “Phaethon“ “Phaethon’s hair is flowing back like flames with smoke streaming thick beyond. Our poor Phaethon is now hurdling towards the the earth, along with his chariot, just like a meteoroid.“ via http://www.jssgallery.org/Paintings/MFA/Phaethon.htm

Yet another reading of the myth, saluting seasonal autumnal change of color, comes from Sri Aurobindo, who wrote a beautiful poem called “Phaethon“:

On whom the dusk air like a sombre dream

Broods and a twilight ignorant of hope,

Say what compulsion drear has bid you seam

Your mossy sides with drop on eloquent drop

That in warm rillets from your eyes elope?

Is it for the too patient sure decay

Pale-gilded Autumn, aesthete of the years,

That thus along the tufted, downy way

And thus with tearful gusts your branches sway

Sighing a requiem to your emerald day?