I.“Her hair, which was powdered with violet sand, and combined into the form of a tower, after the fashion of the Chanaanite maidens, added to her height. Tresses of pearls were fastened to her temples, and fell to the corners of her mouth, which was as rosy as a half-open pomegranate. On her breast was a collection of luminous stones, their variegation imitating the scales of the murena. Her arms were adorned with diamonds, and issued naked from her sleeveless tunic, which was starred with red flowers on a perfectly black ground. Between her ankles she wore a golden chainlet to regulate her steps, and her large dark purple mantle, cut of an unknown material, trailed behind her, making, as it were, at each step, a broad wave which followed her.

It was the moon that had made her so pale, and there was something from the gods that enveloped her like a subtle vapour. Her eyes seemed to gaze far beyond terrestrial space.”

II.“An influence had descended upon the maiden from the moon; when the planet passed diminishing away, Salammbo grew weak. She languished the whole day long, and revived at evening. During an eclipse she nearly died.” 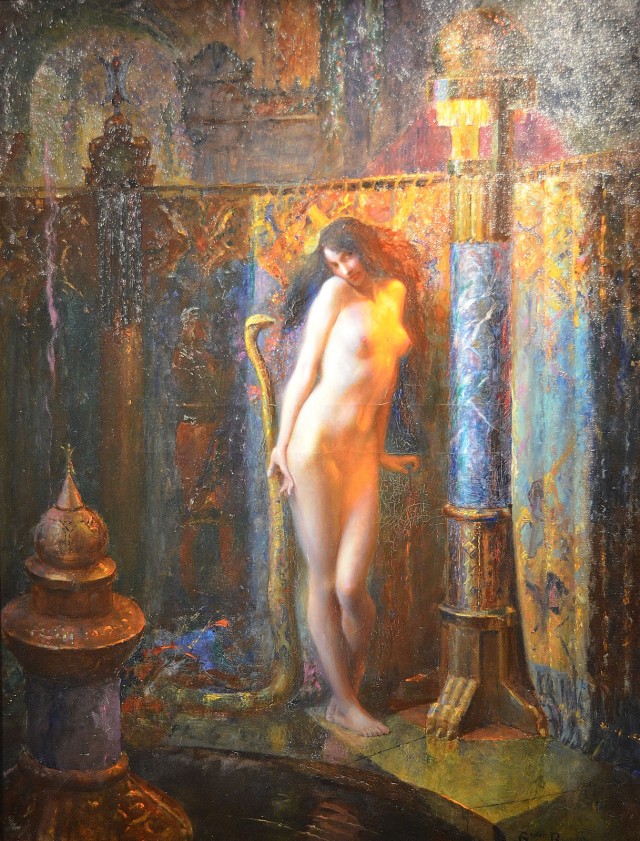 III.“Salammbô crouched down upon the onyx step on the edge of the basin; she raised her ample sleeves, fastening them behind her shoulders, and began her ablutions in methodical fashion, according to the sacred rites.

Next Taanach brought her something liquid and coagulated in an alabaster phial; it was the blood of a black dog slaughtered by barren women on a winter’s night amid the rubbish of a sepulchre. She rubbed it upon her ears, her heels, and the thumb of her right hand, and even her nail remained somewhat red, as if she had crushed a fruit.

The moon rose; then the cithara and the flute began to play together.

Salammbô unfastened her earrings, her necklace, her bracelets, and her long white simar; she unknotted the band in her hair, shaking the latter for a few minutes softly over her shoulders to cool herself by thus scattering it. The music went on outside; it consisted of three notes ever the same, hurried and frenzied; the strings grated, the flute blew; Taanach kept time by striking her hands; Salammbô, with a swaying of her whole body, chanted prayers, and her garments fell one after another around her.

The heavy tapestry trembled, and the python’s head appeared above the cord that supported it. The serpent descended slowly like a drop of water flowing along a wall, crawled among the scattered stuffs, and then, gluing its tail to the ground, rose perfectly erect; and his eyes, more brilliant than carbuncles, darted upon Salammbô.

A horror of cold, or perhaps a feeling of shame, at first made her hesitate. But she recalled Schahabarim’s orders and advanced; the python turned downwards, and resting the centre of its body upon the nape of her neck, allowed its head and tail to hang like a broken necklace with both ends trailing to the ground. Salammbo rolled it around her sides, under her arms and between her knees; then taking it by the jaw she brought the little triangular mouth to the edge of her teeth, and half shutting her eyes, threw herself back beneath the rays of the moon. The white light seemed to envelop her in a silver mist, the prints of her humid steps shone upon the flag-stones, stars quivered in the depth of the water; it tightened upon her its black rings that were spotted with scales of gold. Salammbo panted beneath the excessive weight, her loins yielded, she felt herself dying, and with the tip of its tail the serpent gently beat her thigh; then the music becoming still it fell off again.”

Salammbô is the title character of a historical novel by Gustave Flaubert. Although the well-researched novel focuses on the mercenary rebellion in Carthage in 237 B.C., the story of Salammbô steals the spotlight. We first encounter her as a pure maiden, raised by her father away from society, in a castle surrounded with luxury and with servants constantly waiting on her. She is a striking ethereal being, always gazing at the moon and stars, accepting “pure symbols and even manners of speech as being true in themselves.” She devotes her entire time to worshipping the moon goddess Tanith. The zaimph – the sacred veil of the goddess – gives the city of Carthage its moral strength. The prophesy says that whoever shall touch it, will die. As the story progresses, Salammbô gathers more and more flesh without losing any of her sublime elevation. Touching the veil of the goddess can end only in one way for her, though. 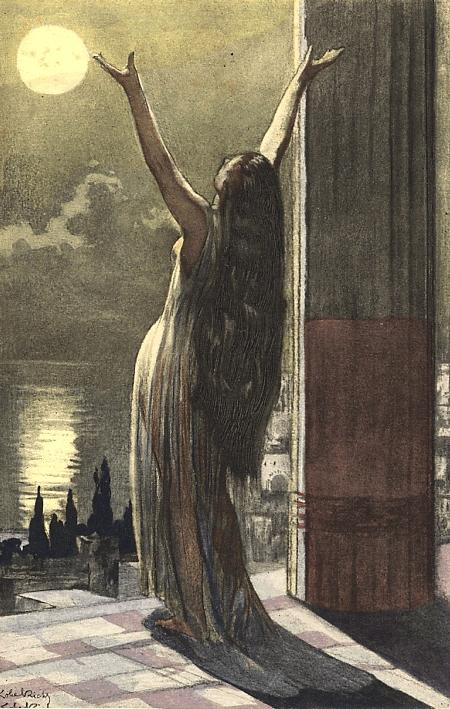