Jung on Alchemy (4): Prima Materia – The One, Who Art All 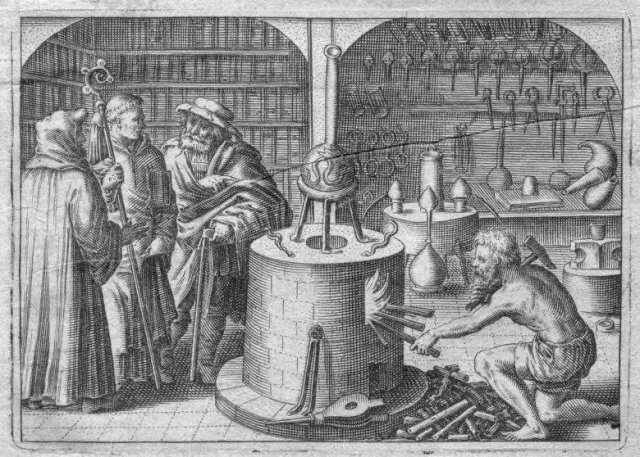 The Library and the Laboratory (From Michael Maier, Tripus Aureus, Frankfurt, 1677)

In this vignette found in Michael’s Maier’s Tripus Aureus Jung saw “the double face of alchemy.“ On the right hand side, a man is busy at a furnace, engaged full on in the physical and transformative experience, while in the library three learned men are having a philosophical debate. Theorizing and applying the theory were of equal importance to alchemists: learning required an equal measure of doing, throwing oneself into an experience without hesitation or holding back. In the round flask on the tripod there is a winged dragon – a crucial symbol in the alchemical opus:

“The dragon in itself is a monstrum – a symbol combining the chthonic principle of the serpent and the aerial principle of the bird. It is … a variant of Mercurius. … When the alchemist speaks of Mercurius, on the face of it he means quicksilver, but inwardly he means the world-creating spirit concealed or imprisoned in matter. … Time and time again the alchemist reiterate that the opus proceeds from the one and leads back to the one, that it is a sort of circle like a dragon biting its own tail. For this reason the opus was often called circulare or else rota (the wheel). Mercurius stands at the beginning and end of the work: he is the prima materia, the caput corvi [crow’s head], the nigredo; as dragon he devours himself and as dragon he dies, to rise again as the lapis [stone]. He is the play of colours in the cauda pavonis [peacock’s tail] and the division into four elements. He is the hermaphrodite that was in the beginning, that splits into the classical brother-sister duality and is reunited in the coniunctio, to appear once again at the end in the radiant form of the lumen novum, the stone. He is metallic yet liquid, matter yet spirit, cold yet fiery, poison and yet healing draught – a symbol uniting all opposites.“ (Jung, Psychology and Alchemy, par. 404) 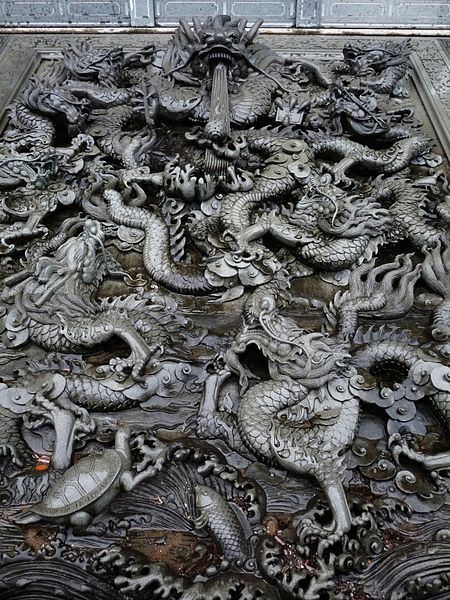 Mercurius – the embodied mind and the sublime mind; mind both practical and philosophical, the Creating Word that was at the beginning – is the key to alchemical process, and was frequently equated with prima materia – First Matter. In Martin Ruland’s Alchemical Lexicon, we can find a list of expressions that various alchemists used to refer to prima materia. Some of the more interesting ones are:

Water of Life, Dew, Bride, Spouse, Mother, Eve, Pure and Uncontaminated Virgin, A Spiritual Blood, The Soul and Heaven of the Elements, The Matter of All Forms, Heart of the Sun, Shade of the Sun, Heart and Shade of Gold, Chaos, Venus, Isis, Mother, The Sea, Bird of Hermes, The Woman, Water of Gold, Soul of Saturn, the Earth, Spirit.

All of the above possess the undeniable ability of stirring imagination and inspiring a creative vision. All of them speak of begetting fertility of the world soul (anima mundi) that permeates the whole fabric of being bringing all its elements together. Alchemists visualized matter as spiritual, and spirit as material. The distinction into matter and spirit was actually only a matter of degree: from the crude and gross to the subtle (subtilis), though the essential ingredients were there all along, lying dormant, waiting to be discovered by an adept on the path to Self-actualization. 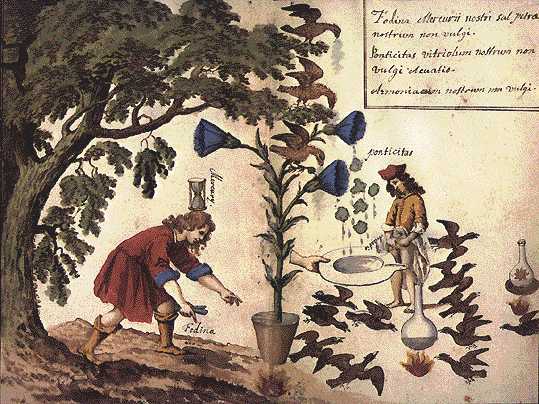 Earth is one of the thousand names given to materia prima by such alchemists as Basilius Valentinus, who believed that the earth-spirit, itself nourished by the stars, “gives nourishment to all the living things it shelters in its womb.” (Psychology and Alchemy, par. 444). The minerals and all life forms are hatched in the earth’s womb thanks to the grace of the spirit received from on high. Paracelsus used the term Yliaster to refer to prima materia he imagined to consist of body and soul, matter and stars. Yliaster was the star seed present in all matter, its spiritual core and its formless base (the bedrock of archetypes).

Water was another very apt and popular metaphor for prima materia. Alchemists spoke of divine or miraculous water, humidum radicale (root moisture). This aqueous soulful substance was imprisoned in matter and could be extracted by means of cooking over fire, and also by the process of dismemberment – dissolution and separation of the elements with the view to transforming them. The alchemical water had the power to dissolve and to animate inert matter, to resurrect the dead, as well as to wash the blackness (nigredo) into whiteness (Jung, Alchemical Studies, par. 89). Water was believed to be the soul of all substances. Caesariud of Heisterbach, an alchemist quoted by Jung, believed the soul to be moist like dew, speaking of its spherical nature, “like the globe of the Moon,  or like a glass vessel that is ‘furnished before and behind with eyes” and ‘sees the whole universe.‘“ Thus, the soul contains the starry heaven within (Alchemical Studies, par. 114).

The feminine aspect of the prima materia – as the mother of the philosopher’s stone – was essential to all alchemists. Says Jung in Mysterium Coniunctionis:

“Materia prima in its feminine aspect: it is the moon, the mother of all things, the vessel, it consists of opposites, has a thousand names, …, as Mater Alchimia it is wisdom and teaches wisdom, it contains the elixir of life in potentia and is the mother of the Saviour and of the filius Macrocosmi, it is the earth and the serpent hidden in the earth, the blackness and the dew and the miraculous water which brings together all that is divided.“ (par. 15).

“She is that piece of chaos which is everywhere and yet hidden, she is that vessel of contradictions and many colours – a totality in the form of massa confusa, yet a substance endowed with every quality in which the splendour of the hidden deity can be revealed.“ (par. 422)

The deity hidden in prima materia was most frequently identified with Isis: the healing goddess, who not only healed Ra of poisoning but also put together the dismembered Osiris:

“… she personifies that arcane substance, be it dew or the aqua permanens, which unites the hostile elements into one. … The cognomen of Isis was the Black One. … since ancient times she was reputed to possess the elixir of life as well as being adept in sundry magical arts. She was also … rated as a pupil of Hermes, or even his daughter. … She signifies earth, according to Firmicus Maternus, and was equated with Sophia, … the vessel and the matter of good and evil. An inscription invokes her as ‘the One, who art All.‘ She is named the redemptrix. In Athenagoras she is ‘the nature of the Aeon, whence all things grew and by which all things are.‘ (Mysterium Coniunctionis, par. 14)

Since etymologically alchemy means “dark earth“ we may venture a statement: alchemy and Isis are closely intertwined. Isis is at the primal heart of alchemy, at the beginning of the opus. She is pure and untouched, waiting to be transmuted by the ensuing alchemical operations. 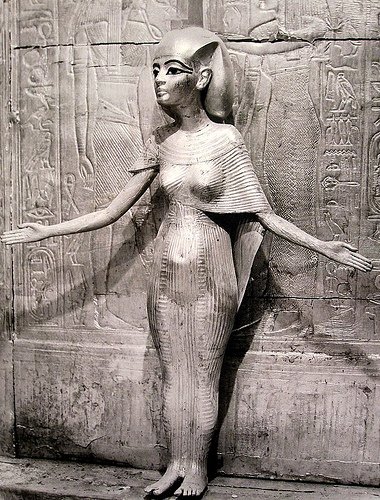