“Enter the turret of your love, and lie
close in the arms of the sea; let in new suns
that beat and echo in the mind like sounds
risen from sunken cities lost to fear;
let in the light that answers your desire
awakening at midnight with the fire,
until its magic burns the wavering sea
and flames caress the windows of your tower.”

Denise Levertov, “The Sea’s Wash in the Hollow of the Heart…”

The threads of Ariadne’s mythical story are manifold and contradictory. Her name, according to Graves, meant “most pure” and “high fruitful mother of the barley.” According to this scholar, she was the Cretan snake goddess, and the Mistress of the Labyrinth, where she led other maidens in a sensuous winding dance. In a popular myth, she helps Theseus catch the Minotaur by offering him a ball of thread to navigate his way through the Labyrinth, where the monstrous half man, half bull lived, and feasted regularly on human flesh. The Minotaur was a dark and beastly shadow figure, contradictory to Ariadne’s purity.  He was the offspring of Pasiphaë and a beautiful white bull, which Minos – Pasiphaë’s husband and Ariadne’s father – refused to sacrifice to Poseidon due to greed. Poseidon made Pasiphaë fall in love with the bull as an act of revenge on Minos.

Because she had fallen in love with Theseus, she renounced her family and her native land to follow him to Athens. But Theseus abandoned her on the desolate island of Naxos:

“Not the home where she was born, and certainly not the home she hoped to be welcomed in, nor even some country in between. Just a beach lashed by thundering waves, an abstract place where only the seaweed moves. It is the island where no one lives, the place where obsession turns round and round on itself, with no way out. A constant flaunting of death. This is a place of the soul.

Ariadne has been left behind. The clothes fall from her body one by one. It is a scene of mourning. Awake now, but still as the statue of a Bacchant, Minos’s daughter gazes into the distance toward the eternal absentee, for Theseus’s swift ship has already disappeared over the horizon, and her mind rises and falls with the waves. The thin ribbon that held her blond hair slips off, her cloak falls away leaving her chest bare, her breasts are no longer supported by their sash. One after another, the clothes in which she left Crete forever fall and scatter at her feet. The waves toy with them in the sand and seaweed.”

The possible continuations of the story were many, as Calasso continues:

“Abandoned in Naxos, Ariadne was shot dead by Artemis’s arrow; Dionysus ordered the killing and stood watching, motionless. Or: Ariadne hung herself in Naxos, after being left by Theseus. Or: pregnant by Theseus and shipwrecked in Cyprus, she died there in childbirth. Or: Dionysus came to Ariadne in Naxos, together with his band of followers; they celebrated a divine marriage, after which she rose into the sky, where we still see her today amid the northern constellations. Or: Dionysus came to Ariadne in Naxos, after which she followed him around on his adventures, sharing his bed and fighting with his soldiers; when Dionysus attacked Perseus in the country near Argos, Ariadne went with him, armed to fight amid the ranks of the crazed Bacchants, until Perseus shook the deadly face of Medusa in front of her and Ariadne was turned to stone. And there she stayed, a stone in a field.

No other woman, or goddess, had so many deaths as Ariadne. That stone in Argos, that constellation in the sky, that hanging corpse, that death by childbirth, that girl with an arrow through her breast: Ariadne was all of this.”

In his Seven Sermons to the Dead, C.G. Jung wrote: “The sexuality of man is more earthly, while the sexuality of woman is more heavenly. The spirituality of man is more heavenly, for it moves in the direction of the greater. On the other hand, the spirituality of woman is more earthly, for it moves in the direction of the smaller.” The heavenly luminous and pure feminine essence shudders at the encounter with the lustful Minotaur, which symbolizes the dark, maze-like entrapment of the senses and desires. But liberation can only happen by entering the Labyrinth. The movement of the spiritual towards the earthly inevitably entails suffering through multiple symbolic deaths, as was the case with Ariadne. The Worthy Bull was one of the epithets of Dionysus, whom Ariadne married and for whom she bore many notable children. In some versions of the myth, after marrying Dionysus Ariadne received a new name – Libera (Liberty). Her wedding gift from the god was a crown, made by Hephaestus of “fiery gold and Indian gems, set in the shape of roses.” (Graves). It was set among the stars as the constellation of the Corona Borealis.

On the website The Constellation of Words, the author discusses the manifold symbolism of the crown, going as far as linking it to the Statue of Liberty. The crown encompasses a rich symbolism of being bounded by fate, being bound like slaves, but also being bound by an auspicious and fruitful (marital) union:

“The Statue of Liberty symbolically represents Libertas (liberty), Ancient Rome’s goddess of freedom from slavery, oppression and tyranny. Ariadne was marooned on an island. To be marooned is to be put ashore on a deserted island or coast and intentionally abandoned. A Maroon was the word for a fugitive slave in the West Indies in the 17th and 18th centuries. Liberia, a country in West Africa, was founded and settled mainly by freed slaves. …The crown has associations with both liberty and also slavery ‘in ancient times slaves taken by right of conquest were sold wearing garlands, and hence were said to be sold ‘under a crown.’ …the crown was a sign that those who were being sold were captives.’”

Ariadne – both a mortal woman and a goddess, abandoned and rescued, bounded and liberated, a Labyrinth guide who became lost and marooned on a desert island, is one of the most fascinating faces of the eternal feminine. Her gentleness and purity is palpable in Picasso’s painting showing a blind Minotaur being led by a girl with a white dove. 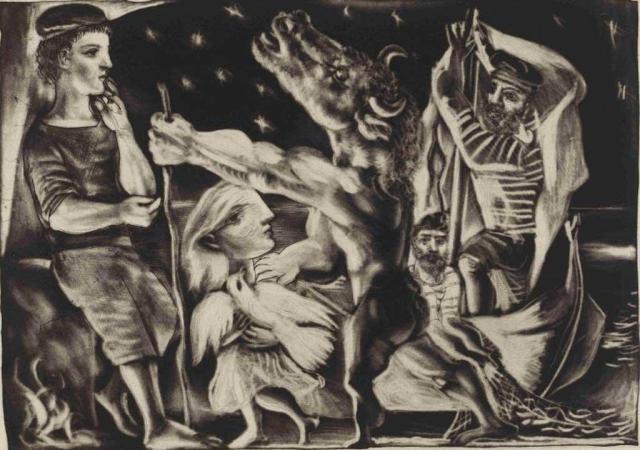 Pablo Picasso, “Blind Minotaur Led by a Girl in the Night”

After the beast was slayed, she told Theseus to sacrifice the Minotaur to Poseidon – the god of the sea. It is in the sea where all the opposing forces dissolve: power and tenderness, lust and love, slavery and liberty, become One again. However, in the earthly world of the senses, Ariadne had to experience the awakening to the world of piercing, conflicting desires and emotions.