“From love’s first fever to her plague” by Dylan Thomas: A Study of Consciousness

“From love’s first fever to her plague, from the soft second
And to the hollow minute of the womb,
From the unfolding to the scissored caul,
The time for breast and the green apron age
When no mouth stirred about the hanging famine,
All world was one, one windy nothing,
My world was christened in a stream of milk.
And earth and sky were as one airy hill.
The sun and moon shed one white light.

From the first print of the unshodden foot, the lifting
Hand, the breaking of the hair,
From the first scent of the heart, the warning ghost,
And to the first dumb wonder at the flesh,
The sun was red, the moon was grey,
The earth and sky were as two mountains meeting.

The body prospered, teeth in the marrowed gums,
The growing bones, the rumour of the manseed
Within the hallowed gland, blood blessed the heart,
And the four winds, that had long blown as one,
Shone in my ears the light of sound,
Called in my eyes the sound of light.
And yellow was the multiplying sand,
Each golden grain spat life into its fellow,
Green was the singing house.

The plum my mother picked matured slowly,
The boy she dropped from darkness at her side
Into the sided lap of light grew strong,
Was muscled, matted, wise to the crying thigh,
And to the voice that, like a voice of hunger,
Itched in the noise of wind and sun.

And from the first declension of the flesh
I learnt man’s tongue, to twist the shapes of thoughts
Into the stony idiom of the brain,
To shade and knit anew the patch of words
Left by the dead who, in their moonless acre,
Need no word’s warmth.
The root of tongues ends in a spentout cancer,
That but a name, where maggots have their X.

I learnt the verbs of will, and had my secret;
The code of night tapped on my tongue;
What had been one was many sounding minded.

One wound, one mind, spewed out the matter,
One breast gave suck the fever’s issue;
From the divorcing sky I learnt the double,
The two-framed globe that spun into a score;
A million minds gave suck to such a bud
As forks my eye;
Youth did condense; the tears of spring
Dissolved in summer and the hundred seasons;
One sun, one manna, warmed and fed.”

I find this poem strikingly beautiful. It has been viewed as rendering the evolution of a poet from the simplicity of childhood through the complexity of confusing adolescence back to the simplicity of conscious maturity. The first stanzas, which describe the budding consciousness of a child, are smoother and lighter, in comparison to the closing lines, which are slower and heavier, as if loaded with complex and manifold life experience. Reaching maturity means returning to oneness that characterized childhood, yet it is now of a deeper and more substantial quality. The poem seems to point out that mature consciousness is both simple and complex, simultaneously turning inwards and outwards. In childhood it is undifferentiated, then it differentiates and polarizes (especially by means of language and thinking) amidst the turmoils of adolescence, only to subsequently reach a synthesis, but now from a richer perspective. Manna – the nourishment sent by God to the Israelis wondering through the desert – has a deeply human and maternal connotation, and yet it is warmed by the rays of the Sun, which is the most universal symbol of distant divine consciousness. On account of its tremendous maturity, it is extraordinary that Dylan Thomas was only eighteen when he wrote the poem. I cannot think of a better expression of growing into consciousness than this. 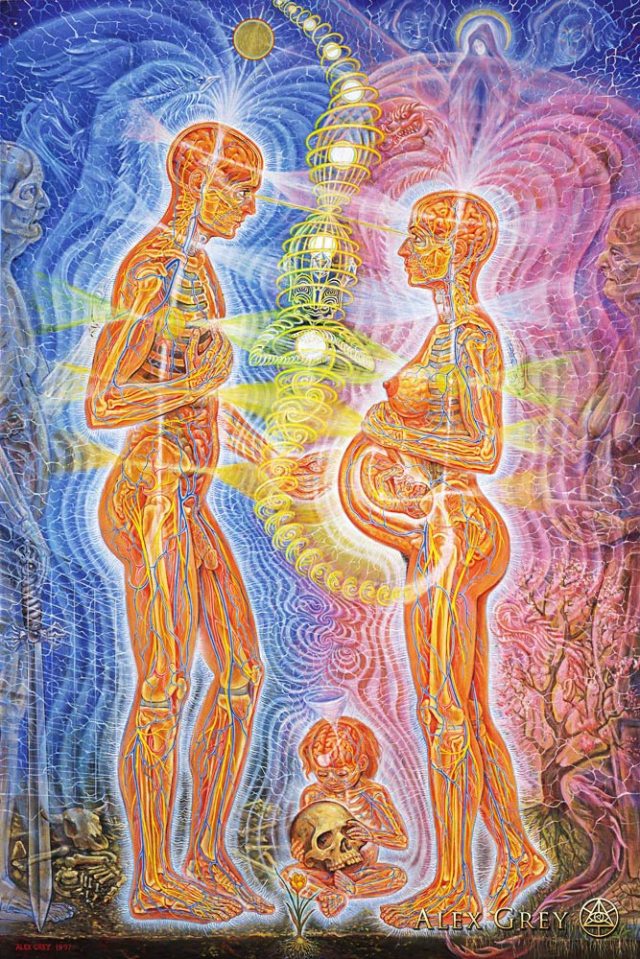 Source of inspiration for interpreting the poem: