II.”It is the time you have wasted for your rose that makes your rose so important.”

Salvadore Dali, “Enigma of the Rose”

The rich minimalism of the Little Prince’s wisdom brings to mind the apparent simplicity of the Japanese karesansui (dry-mountain-water) gardens, known as Zen gardens in the West. The origins of those gardens are long lost in historical obscurity, but most probably they go back to Shinto – the Japanese native religion, which founded the sacred in elements of nature such as rocks, trees, mountains or rivers. The wavelike patterns of the raked gravel are believed to evoke currents of running water, while lone-standing rocks could be viewed as mountains rising out of the ocean, but one would be fooled to trust such limiting interpretations. The dry garden, always viewed from inside a room and composed like a painting, is first and foremost a place of contemplation; it is meant to startle the mind of the observer into a spiritual state by purifying it from pre-conceived ideologies.

“The dry garden at Ryoan-ji consists of fifteen rocks distributed in five groups across a rectangular field of coarse sand, surrounded on three sides by a rustic wall that shuts out the world and on the fourth by a narrow veranda from which you view the garden, raised several feet above it. You cannot enter, but only contemplate it. There are no plants, unless you count the moss growing at the feet of some of the stones, or the trees looking over the wall from outside, which barely enter your field of vision and which you might notice for the first time looking at photographs afterward. There is no water, except that some people count the raked sand as a sea, from which the stones poke up like islands. The rocks are rough and uncarved, quite wild when you focus closely on them, but don’t fill much of the space. It is a place stripped practically bare, much more empty than full. Distances between the groups can seem vast, even cosmic, the dark punctuation of the rocks a heavenly constellation. The sand is more prosaically likened to clouds from which mountain tops poke up. Ryoan, in the name of the temple, means ‘Dragon Peace’; the rocks are also described as a tigress and her cubs swimming across a river. Maybe all these narratives that translate rocks and sand into something else are weak-minded efforts to get over the discomfort of an assertion of pointlessness that is at the same time inexplicably beautiful. The wall draws a clear line round the experience and says the random grouping forms a whole, but the parts will always look like fragments. You might come to accept that the fragments make sense or that the disturbance can be tolerated, even enjoyed, but you cannot escape entirely from the feeling that something is out of place. The most wonderful interpretation of Ryoan-ji known to me occurs rather late in a film by Yasujiro Ozu called Late Spring in English. The father (a widower) and the uncle of the main character (a daughter who cannot bring herself to leave the nest) sit for a long time in front of the stones without speaking, and then discuss the question of the daughter’s marriage. The distances between the stones correspond to the distance between even the closest human beings. They convey this with a soothing remoteness but without fudging; they are immovable; there are truths we cannot argue with or change. No one says anything like this, but the camera looks at the two men’s backs and then at the rocks standing there, and the stones are momentarily individuals enduring their lots, a fleeting perception from which we soon turn away.”

Robert Harbison, Ruins and Fragments: Tales of Loss and Rediscovery

The central symbol of the Zen garden is the stone. For Jung, it signified “something permanent that can never be lost or dissolved, something eternal that some have compared to the mystical experience of God within one’s own soul;” for Cirlot it is “the first solid form of the creative rhythm —the sculpture of essential movement, and the petrified music of creation.” Stones are pure and perfect in their simplicity, yet powerful, mysterious and inscrutable like the gods.

In Shinto the purified places where spirits or gods gathered were called “niwa” – a word which means “garden.” Spiritual purification, a return to soulful simplicity, seems to be a unifying idea behind all Eastern gardens. At last that was the impression I got from an exhibition dedicated to the history of gardens, which I have seen recently (http://www.rietberg.ch/en-gb/exhibitions/vorschau-gaerten-der-welt.aspx). An inscription next to an installation dedicated to a well-known Korean ghttp://www.rietberg.ch/en-gb/exhibitions/vorschau-gaerten-der-arden reads:

“Yang Sanbo became disillusioned with politics at the imperial court and retreated to his father’s country estate, where he made himself a garden. Called a Hermit’s Garden, it is surrounded by a bamboo forest. Through the middle of it, a mountain stream crashes down over a rock. Its Korean name Saswaewon means ‘the garden in which the spirit is refreshingly cleansed just as bamboo leaves are cleansed by the rain of a thunderstorm.’”

Ruth Ammann, a Jungian analyst, in her book dedicated to a psychological meaning of gardens, traces the roots of the word to the Indo-Germanic word “ghordo” – fence, enclosure, stockade, hence denoting a fenced-in or enclosed area. She marvels at a coincidence:

“Incidentally, ‘paradise’ has the same meaning, originating from the Old Iranian words ‘pairi’ (enclose, surround) and ‘daeza’ (wall). Thus, paradise is first of all a place or site surrounded by a wall. However, it encloses a particularly sacred place, namely the Garden of Eden, the garden of bliss.” 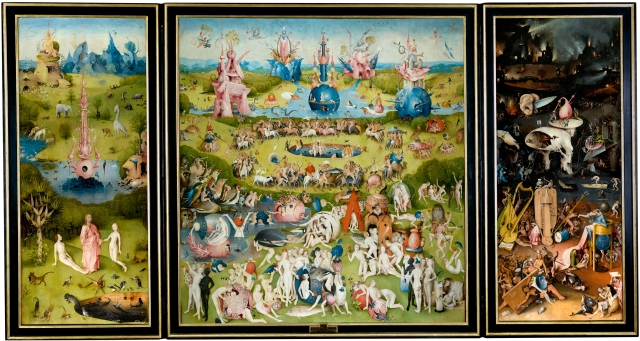 “The Garden of Earthly Delights (by Hieronymus Bosch) mimics the physical form of a sacred image and presents religious content, but its extraordinary central panel looks like nothing else in this world. When closed, the triptych presents a grisaille view of creation as it happens, formless void taking form beneath the crystal sphere of the firmament, moved by God, encased in his own tiny bubble in a space beyond the universe, as he holds open the book that contains the text of universal history. The plants and geological shapes brewing beneath the glassy dome of heaven are fat and swollen, bursting as Thomas Aquinas might have it, with their potential to come into being. When this double panel of amorphous forms is opened, a universe crowded with figures is revealed in a burst of color. The left-handed panel of the open triptych shows Adam and Eve in the Garden of Eden, a Christlike God joining them in marriage. … Behind the First Couple, crazily fertile plants sprout gigantic shoots in improbable pastel colors, carrying out God’s injunction to be fruitful and multiply. The spotted cat carrying a mouse in its teeth in the left foreground, like the lion attacking a stag in the distance, is usually interpreted, like the serpent that coils discreetly around a tree in the middle ground of the panel, as an indication that evil is already present in Creation. But the book of Genesis never specifies that the animals God created in the Garden behaved otherwise than the animals we know; instead, we read that ‘God saw that it was good.’ The cat is being a good cat, doing what a cat is made to do, and so is the lion.” Quoted from “The Mystery of Hieronymus Bosch,” Ingrid D. Rowland, The New York review of Books, August 18, 2016 issue

At its root, a garden and a paradise are one and the same thing. Ammann points out that the garden is enclosed and bounded on the horizontal plane, but it is open on a vertical plane, that is, “unbounded toward the sky and the depths of the earth.” It connects heaven and earth, the mundane changeability with the eternal permanence. The existence of the fence makes a garden akin to a hermetically sealed alchemical vessel. It is a receptacle, where the raw “materia prima” of the chaotic nature is transformed and cultivated through the gardener’s dedication, hard work and respect for nature and its creative divinity. “Half a proper gardener’s work is done upon his knees,” wrote Kipling in his poem “The Glory of the Garden.”

Both in the East and the West, our ancestors performed sacred land-taking rituals, which, as Ammann writes, placed “the garden or the enclosed plot of ground under the protection and mercy of a godhead that represented much greater power than that available to any individual.” The gardener is responsible for attending to and nurturing his or her garden, but its ultimate prospering may in fact lie beyond the gardener’s power. That brings to mind the concept of “borrowed scenery” used by East Asian Garden designers. It involved incorporating background landscape, such as mountains or a lake, into the composition of a garden. Perhaps it is worth remembering that the whole garden is “on loan” from the mighty nature, which may claim it back at any moment. How wild should the garden be is a matter of individual taste. I cannot decide whether I prefer the wilder English garden or the geometric grace of the French one.

Albrecht Dürer, he risen Christ shows himself to Mary Magdalene as a gardener

There is a beautiful line in The Song of Songs: “My sister, dear bride, you are a sequestered garden, a sealed fountain, an enclosed spring.” This line gave birth to the medieval concept of the Hortus Conclusus, a garden strictly shielded from the outside world, which was associated with the Virgin Mary. But perhaps the bride from the Song of Songs could also be interpreted as Mary Magdalene, the first witness of the resurrection, who mistook the risen Christ for a gardener. Or perhaps he chose to show himself as a gardener to her. In broader terms, the soul (anima) seems to have a lot of affinities with the symbolism of the garden. Saint Teresa of Avila compared a soul to a garden. Gardens are certainly places where the soul finds nourishment at the intersection of nature and culture. Whenever I stroll through a beautiful garden, I always have a feeling that it is a place conjured by my imagination, that it will disappear if I close my eyes. In Italo Calvino’s Invisible Cities, Marco Polo talks to Kublai Khan in Kublai’s garden. At one point he muses:

“Perhaps this garden exists only in the shadow of our lowered eyelids. … Perhaps the terraces of this garden overlook only the lake of our mind.” 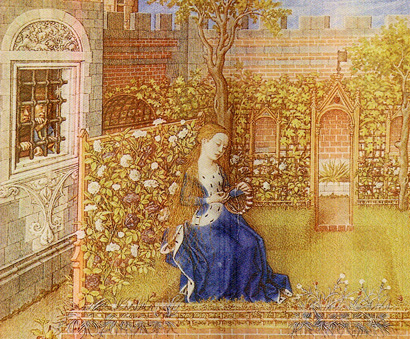 Detail from an illustration for the French translation of La Teseida (1460) by Boccaccio, via http://lemiroirauxpreles.com/GardenHistory.htm

Ruth Ammann, The Enchantment of Gardens: A Psychological Approach

Carl Jung, Man and His Symbols

20 Responses to Symbolism of Gardens