I saw an exhibition today devoted to the history of artists’ engagement with the Moon, from the Romantic era to the post-war period. My attention was captured by numerous works of art – some of them very atmospheric, as is fitting for the subject. Here is my subjective list of what to me appeared as the most outstanding pieces of the exhibition.

1. Darren Almond’s photographs of 4000-year-old Scottish standing stones. The stones are positioned in a way that suggests a thorough knowledge of the moon cycles. The caption describing these photographs said:

“The mysterious beauty of these stones quite understandably evokes associations with the rocky deserts of the Moon. Although water is considered to be the origin of life, it is primarily rock that tells us the origin of the universe and thus of life.”

2. Photographs by Edward Steichen which used the moon as the source of light were really outstanding.

3. Marianne von Werefkin, a Russian- German-Swiss expressionist painter, is undeservedly less famous than other (male) Expressionists such as Munch or Kirchner. Her life was marred by a toxic love affair with Alexej von Jawlensky, who was also a painter, though much less talented than her. She is quoted as saying, “so that he wouldn’t feel jealous as an artist, I hid my art from him.” To find out more about this outstanding and sadly forgotten figure, look here: 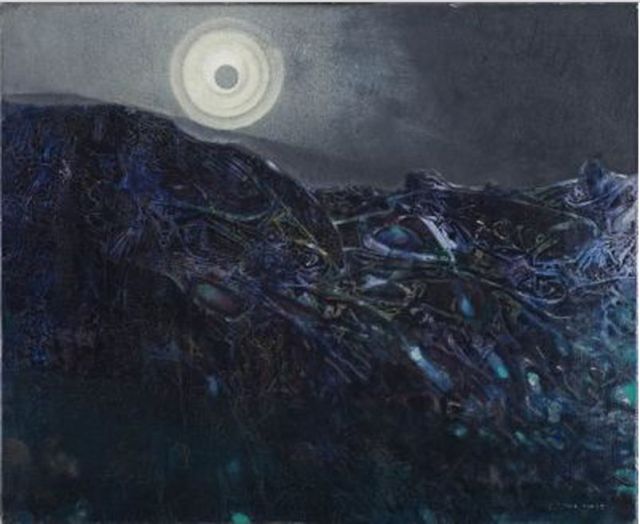 This is quite a haunting image, as the Moon is the only natural object there. Although the description under it said that it is in fact a tribute to the technological progress, it does not feel like one.