The Splendour of Córdoba

“Córdoba is not a decadent town, one of those haughty cities languishing in its own past, in which life becomes stifled. It maintains its own elegant poise, made of the web of dreams and the substance of time itself. There are places here which seem to contain the entire essence of the universe hidden and untouched.”

It is very easy to forget which century we are in while walking through the streets of the old town of Córdoba. There is an intellectual nimbus that crowns this city of great minds: Seneca in the Roman times, the Muslim Averroës, masterful commentator on Aristotle, and the Jewish Maimonides, called the greatest Jewish sage since the biblical Moses, all walked these streets. The cultural legacy of Muslim Spain still dazzles.

Córdoba was the capital of Muslim Spain or Al-Andalus. During the ninth and tenth centuries it was most probably as powerful as Constantinople. Muslims, Jews and Christians are said to have coexisted peacefully there, though not without incidents. Ancient Greek texts were being translated into Arabic, Hebrew and Latin. There were 3000 mosques in the city, the most wonderful of which was La Mezquita. It was not only a place of worship but also a centre of learning, where the Caliph invited greatest thinkers of the Arabic kingdoms. The Moors may have been responsible for the rebirth of classical learning long before the Renaissance began in Europe:

“Normally the Renaissance is traced back to Florentine and Venetian Italy, and with good reason: Venetian trade with the Arabic world did indeed allow Classical learning to re-enter Europe through Italy. But studying the Spanish roots of the Renaissance allows us to ponder how Classical learning only declined in certain parts of Europe, that it continued to flourish in both the Byzantine and Arabic worlds, and that it was returned to Europe via al-Andalus – “Moorish Spain” – roughly 500 years before the Italian Renaissance.”

Of course in those times there were predominantly men who wrote cultural scripts and were allowed personal freedom. Yet there are stories of liberated Islamic women, for example Wallada the Omayyad, who was a member of caliphal aristocracy. She chose not to wear a hijab and was criticized for frivolous clothing. But more importantly, she was a renowned poet and the founder of the most prestigious literary salon in the city. She would walk through the streets of Córdoba with her poems embroidered on her clothes. 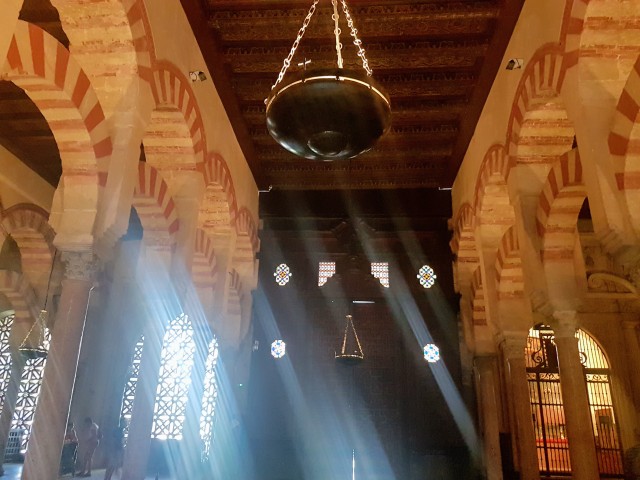 Today the Mezquita remains a remarkable monument containing the elements of all cultures that once lived on the Iberian peninsula. The building materials were salvaged by the Moors from Roman and Visigoth structures. But the most astounding effect was achieved by superimposing a cathedral on the existing mosque. 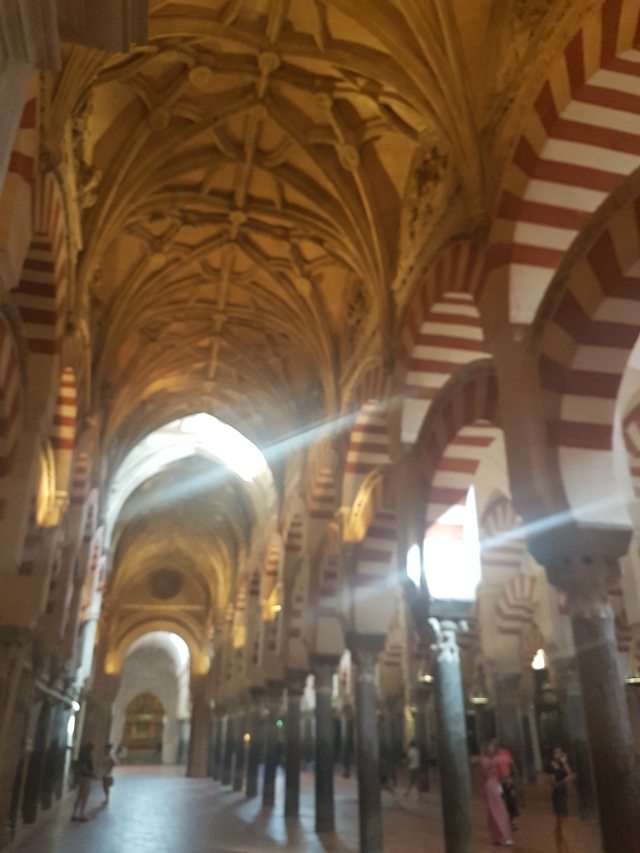 Upon entering the eye rests on the endless sea of white and red arches. Light filters through them delicately and the whole space seems to be floating. There is a sense of lightness and openness. A. Muñoz Molina spoke of “the sensation of space repeating itself and expanding towards the ubreachably far horizon.” Then you realize that you are not in a mosque but in a Catholic cathedral of the Blessed Mary, whose beautiful image adorns one of the columns. 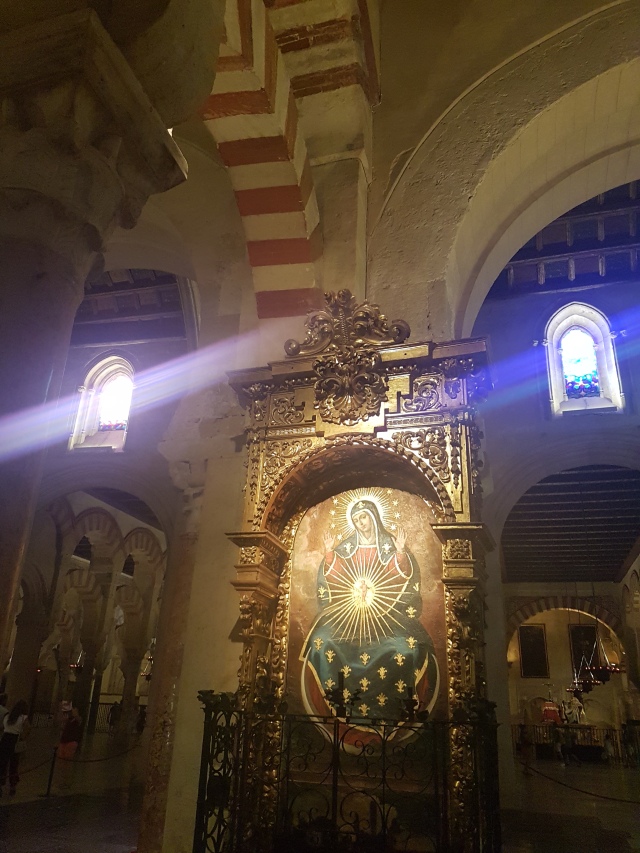 The Christian additions to the mosque – the fifty chapels, the high altar, the choir and high windows, flood the space with light but also, in my opinion, dispel the aura of mystery. The legend says that the king who ordered these additions was horrified when he saw the end result of the work. He lamented that the builders had destroyed unique beauty.

The heart of the temple is not the altar however but indisputably the mihrab (the niche in a mosque indicating the direction of the Kaaba in Mecca – see image above), beautifully decorated with gold mosaic cubes and crowned by a white marble dome in the shape of a shell. The Mihrab has a miraculous presence as a symbol of the Absolute – a doorway to eternity. The shell is a rich symbol both in Islam, where it is viewed as the source of life, and Christianity, which associates it with Mary. In 2004 Spanish Muslims petitioned the Pope to permit them to worship in the Mezquita again. The Vatican said no.

Maimonides statue in the Jewish Quarter

The third great religious group – the Jews – was said to have been in cordial relations with the Muslims during Córdoba’s golden age. The Jewish quarter was large and located near the Mezquita, not in the outskirts of the city like in many other places in Europe. But when the free thinking Umayyad dynasty fell and the rule of the radical Almohads started, the Jews and the Christians were either forced to convert to Islam or chose exile. This was the choice of Maimonides and many others. Another dark chapter in the history of religious freedom on the Iberian peninsula started with the Christian reconquest and was sealed by the actions of the Spanish Inquisition. In 1391 the Jewish quarter was destroed. Bloody auto-da-fés were carried out until the eighteenth century. The model of neighbourly coexistence between Jews, Arabs and Christians had vanished. The roots of Spanish nationalism are attributed to that period while the Jihad ideology of the Almohads further fuelled the hostilities.

A courtyard in the museum dedicated to Sephardic Jews

The patron saint of Córdoba is Archangel Raphael, whose statues are dispersed all over the city. The most famous one overlooks the great Roman bridge and there is a smaller one on the bridge itself. Raphael is the Watcher of the North and he represents the royal star Regulus. His name means “God Heals.” He is an important figure in all the three religions that for a brief moment in history peacefully coexisted here. 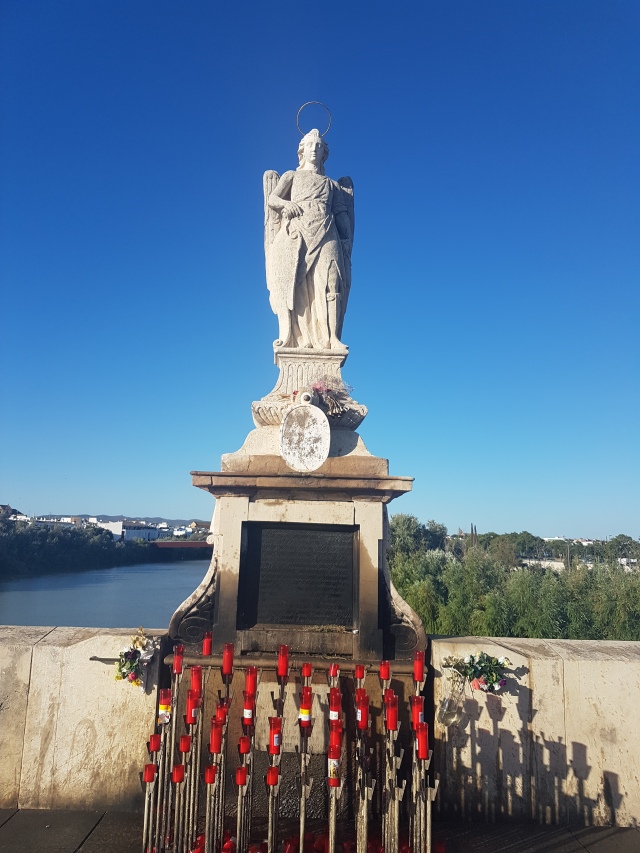 10 Responses to The Splendour of Córdoba