The Danaids, the Lernaean Hydra and Heracles 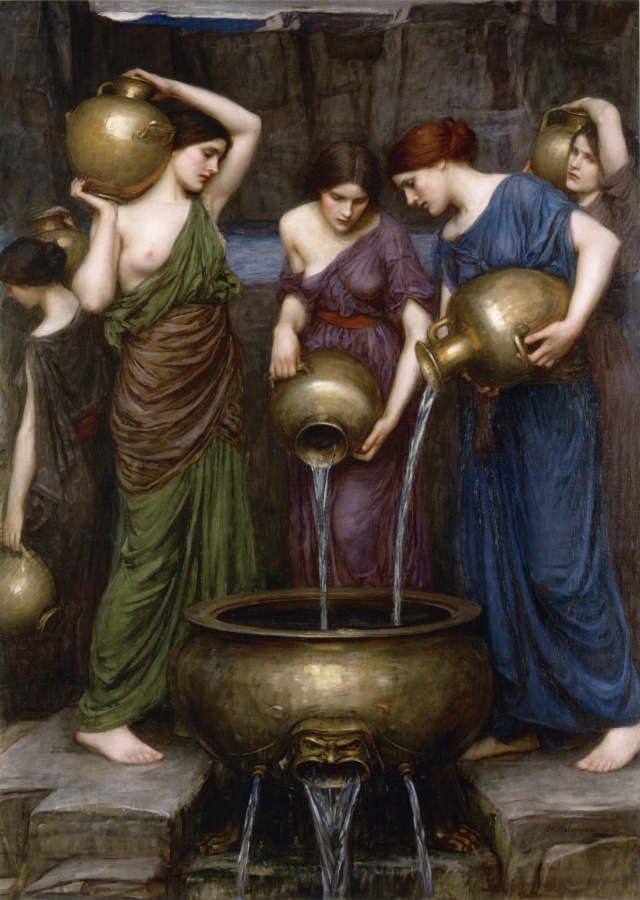 According to the Greek myth, the Danaids, fifty daughters of Danaus, were forced to marry fifty sons of Aegyptus, a ruler of Egypt. Forty-nine of them killed their husbands on the wedding night. The forty-nine heads of the men were tossed into the marshes of Lerna. As punishment, the Danaids were sent to Tartaros, were they were ordered to endlessly pour water into a leaky pitcher. At least such is the official, patriarchal version of the myth told by the Greek conquerors.

For Robert Graves and J.J. Bachofen (1) the Danaids were water priestesses, who brought the precious gift of pure water from the delta of the Nile to the dry Peloponnese in Greece. Their ancient sanctuary was raided by the Greeks, as Robert Graves tells in his Greek Myths:

“After the second successful attempt, the Hellenic leader married the Chief-priestess and distributed the water-priestesses as wives among his chieftains.”

In Graves’ view, the Danaids were not pouring water into a leaky pitcher, but they were rather performing an act of sympathetic magic by ritual sprinkling the ground with water. The Greeks seemed to have “welcomed the gift of water but rejected the Danaids.” (2)

From the heads of the forty-nine men that got thrown into the marshes, the nine-headed Hydra, a symbol of the wrathful feminine, was born with eight mortal and one immortal golden head and black bile in her veins. Destroying her was one of the twelve labours of Heracles. Hydra was so venomous that not only her breath could kill instantly but the sheer smell of her tracks was deadly. Heracles lured the monster out of its cave with flaming arrows. First he tried to use brute force and clobbered her heads, but each time one was vanquished two more sprang up. Meanwhile, the goddess Hera sent a giant crab to nip at the hero’s foot and thwart his efforts further. Heracles killed the crab, which was subsequently placed in the constellation karkinos, i.e. Cancer. Heracles decided to change the tactics and asked his nephew Iolaos, who accompanied him, to burn the surrounding woods and burn each stump left by the freshly cut off heads with a torch so that it will not grow back. This cauterization of the wound to seal it had been recommended by Athena. Thus Hydra was conquered, her body, together with the immortal head, buried under a heavy rock. 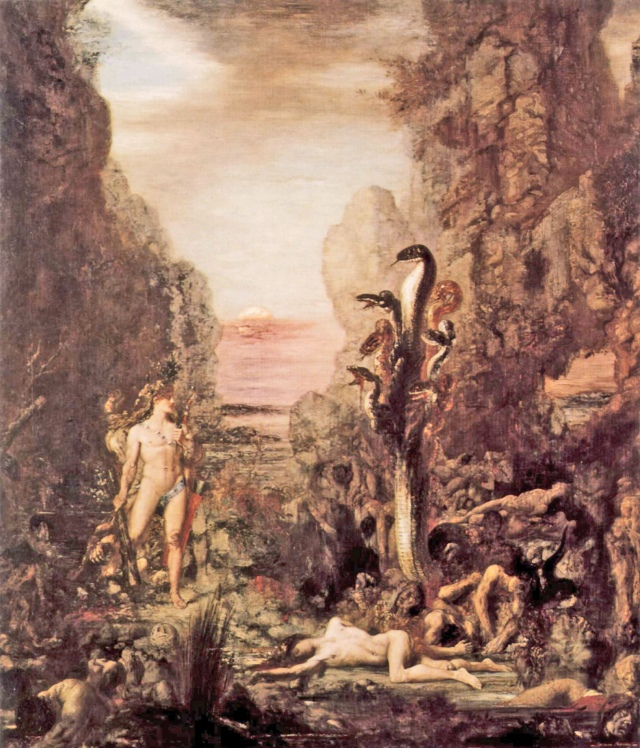 In times of crisis like the current one, when we are battling the many-headed Hydra, we can choose to understand the events in multiple ways. We can see Hydra as the symbol of the wrathful feminine wronged and violated by the patriarchal idea of progress ravaging earth and its resources. In the first part of Matrix Agent Smith says these words to Morpheus:

“Every mammal on this planet instinctively develops a natural equilibrium with the surrounding environment but you humans do not. You move to an area and you multiply and multiply until every natural resource is consumed and the only way you can survive is to spread to another area. There is another organism on this planet that follows the same pattern. Do you know what it is? A virus.”

After killing Hydra Hercules used her black blood  to dip his arrows in. The same poisonous arrow was later shot accidentally, wounding the wise centaur Chiron. The wounded healer archetype is a reminder that we are all subject to suffering endemic to flesh and blood, we are all mortal. The hydra of epidemic can also be viewed as a natural phenomenon, raising its head periodically throughout history, with no one to blame, just as a manifestation of fate. To prevail in the current crisis, when we are wounded by the arrows of misfortune, we need fierce defensive measures, not brute force. This monster that we are facing cannot be clubbed to death. It can be neutralized with wisdom, consciousness symbolized by fire and co-operation. The immortal head of Hydra is golden, which means that in the dark swamps of our transgressions there is alchemical gold to be found. But we also need the patience, kindness and wisdom of Chiron. The arrow, which is a symbol of “the inner strength and unity deriving from correct use and development of the ‘killer instinct'” as well as “the evolution of aggression and desire into wisdom” (3) was used both by Apollo, the god of the sun and Artemis, the moon goddess.  The arrow is also connected with “mental, physical and spiritual focus” as well as “focused attention and spiritual maturity.” (4) A heart pierced by an arrow symbolizes suffering but also a conjunction, according to Cirlot, the author of The Dictionary of Symbols. Perhaps in times like this we can transcend our differences and dualities, not only those of gender. Perhaps a new sense of unity will be born. 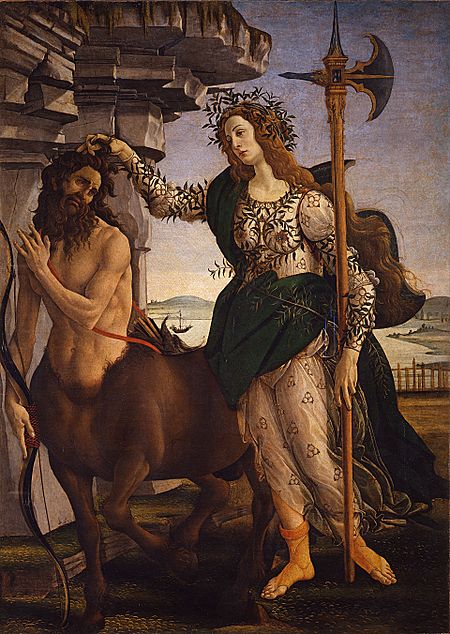 Sandro Botticelli, “Pallas and the Centaur”

When I was younger one of my favourite books was Love in the Time of Cholera by Marquez. There are numerous passages that I remember but I want to focus on this one describing how a character is confronted with the death of a loved one: 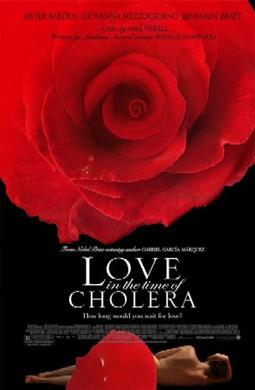 What stayed with me from that book that I read so many years ago is the simple, immortal truth of solidarity in suffering. Paradoxically, a sense of oneness and community may arise from forced isolation and social distancing.

An image from “The Red Book”

(1) Johann Jakob Bachofen (born in 1815) was an early Swiss proponent of the prehistoric matriarchy, author of Mother Right: an investigation of the religious and juridical character of matriarchy in the Ancient World

(2) Roberto Calasso, The Marriage of Cadmus and Harmony

(3) The Book of Symbols: Reflections on Archetypal Images, ARAS, ed. by Ami Ronnberg

6 Responses to The Danaids, the Lernaean Hydra and Heracles