Gilgamesh: He Who Saw the Deep

If you happen to have some time on your hands, I strongly recommend that you take a look at Ancient Masterpiece of World Literature (https://www.edx.org/course/ancient-masterpieces-of-world-literature), a  course which Harvard University is currently offering online free of charge. You can also pursue a Verified Certificate for a fee. Section 2 of the course examines the great Epic of Gilgamesh, He Who Saw the Deep, the oldest literary masterpiece, which was lost for 2000 years. The standard version of the epic was widely popular around 1200 BC in the ancient Near East, not only in Mesopotamia, where it was created. It was written in cuneiform script, which went out of use around 300 BCE. Consequently, the epic disappeared for centuries and was not found until the nineteenth century, when a group of explorers discovered the ruins of the ancient city of Nineveh, and most importantly the remains of the library of Assurbanipal, king of Assyria. The king was in possession of clay tablet with the Epic of Gilgamesh inscribed on them. 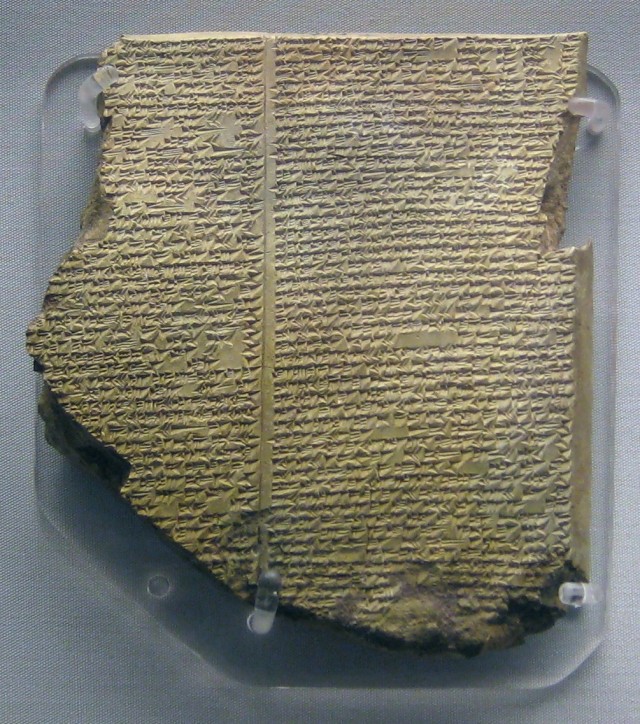 The Epic of Gilgamesh

What is is about The Epic of Gilgamesh that is so intoxicating to readers of all times? Rainer Maria Rilke referred to it as “the epic about the fear of death” (1) He considered it to be “among the greatest things that can happen to a person… I have immersed myself in [it], and in these truly gigantic fragments I have experienced measures and forms that belong with the supreme works that the conjuring Word has ever produced.” (2)

Gilgamesh from The Louvre

At the beginning of the epic Gilgamesh, despite being two-thirds divine and one-third human, can be described as an unevolved tyrant,  and a rapist, who claims the right of the first night from the brides of the city of Uruk. His human ancestry is rather dark, wince he is the son of a priestess and a male demon or Lil-lu, etymologically connected with Lilith. (3) In order to save the people of Uruk from the oppression of Gilgamesh, the gods decide to create Enkidu, who will be the hero’s equal and companion:

“Let him be a match for the storm of his heart,
let them vie with each other, so Uruk may be rested” (all quotes from the epic come from Andrew George’s translation)

Enkidu is a wild man-animal, covered in hair. He needs to be lured into the civilized world, trading his nature for culture. This task falls to a sacred prostitute or a hierodule, who makes love to him for six days and seven nights. As a result, Enkidu loses his animal nature but gains consciousness. In the meantime, Gilgamesh has a dream foreshadowing the overwhelming events that the arrival of Enkidu will entail:

“The stars of the heavens appeared above me,
like a rock from the sky one fell down before me.
I lifted it up, but it weighed too much for me,
I tried to roll it, but I could not dislodge it.”

Through his friendship with Enkidu Gilgamesh is able to fulfill his fate as a builder of the city but in order to achieve that he needs timber. He decides to go on an expedition to get cedar wood, which was coveted in the Near East because of its high quality. Enkidu tries to dissuade him, but in vain. The cedar forest is guarded by the mighty monster Humbaba, whom Gilgamesh and Enkidu kill, after which they proceed to fell the entire forest. Gilgamesh does not ask himself if complete deforestation is the right price to pay for building a grand palace in the city. The imperial ambitions of the king bring about the destruction of nature and the ensuing wrath of the mother goddess. 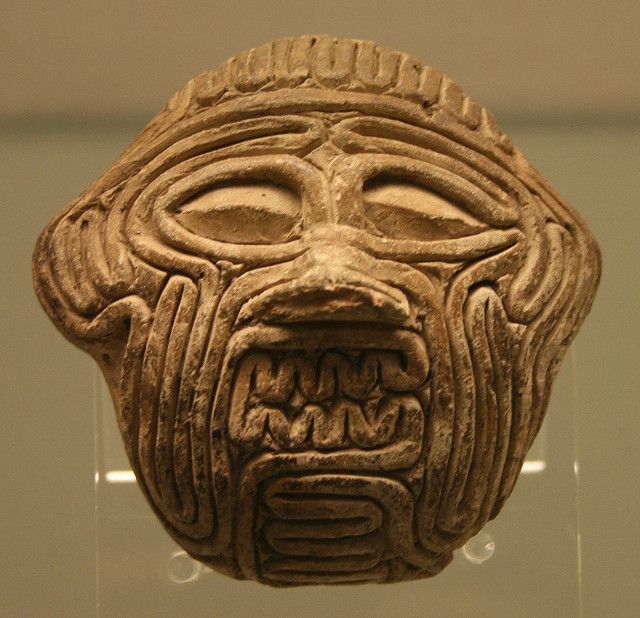 When the triumphant heroes return to Uruk, the goddess Ishtar becomes enamored of Gilgamesh but he spurns her in the most cruel and cynical fashion. What happened to the hero who in another myth (included in the appendix to the Epic) helped the goddess to get rid of intruders that had invaded her holy Huluppu tree and who received gifts from her in return? Kluger alludes here to the conflict between the solar god Shamash and the goddess Ishtar. Civilization and its masculine order meant overcoming the goddess and reducing her role. It was Shamash who had spurned Gilgamesh on his quest to fell the cedar forest and kill Humbaba. The goddess is scornfully “put in her place” by Gilgamesh. Furious, she approaches the god Anu:

“Father, give me, please, the Bull of Heaven,
so in his dwelling I may slay Gilgamesh!
‘If you do not give me the Bull of Heaven,
I shall smash [the gates of the Netherworld, right down] to its
dwelling,
to the world below I shall grant [manumission,]
I shall bring up the dead to consume the living,
I shall make the dead outnumber the living.”

Ishtar is an all-encompassing goddess; she is life which includes death, she rules both the earth and the starry realm. This universality is captured in a marvellous hymn to Ishtar, which is quoted by Kluger in her book:

“Thou, all mistresses’ mistress, and all goddesses’ goddess, / Thee I implore. / Ishtar, queen of all lands, ruler of man, / Strong art thou, an empress high. / Thy name be hallowed. / Thou art the source of light for heaven and earth, / thou strong daughter of Sin. / Thou guidest the arms of the warrior, / And setteth the stage for the battle to happen. / Mistress whose splendor and greatness is beyond all the gods! / Star, thou, of the battle’s tumult, / Thou who bringeth discord in the midst of brothers who lived in / peace and harmony before, / Thou who betrayeth the covenant of friendship and love, / Mistress of the battlefield thou, who overturneth mountains, / Where is not thy name and thy commandments? / Thou art great, thou art splendid. / Strongest of all rulers thou, who leadeth kings by the rein like horses, / Who openeth the womb of barren women, / The men’s goddess, the women’s Ishtar! / Whose decision no one can predict. / Where thou lookest, the dead become alive again, the afflicted one rises from the sickbed, / And he who went astray finds the right path again, when he beholds thine countenance. / Irnini, glory, and grim lion thou, may thy heart find peace. / Thou, wild bull of fury, may thy soul be pacified. / Let thine eyes rest mercifully upon me. / Thou in thine radiance, look upon me with grace. / Ishtar is great, Ishtar is queen. / The mistress is full of glory, the mistress is queen. / Irnini, daughter of Sin, thou strong one, there is none equal to thee.” 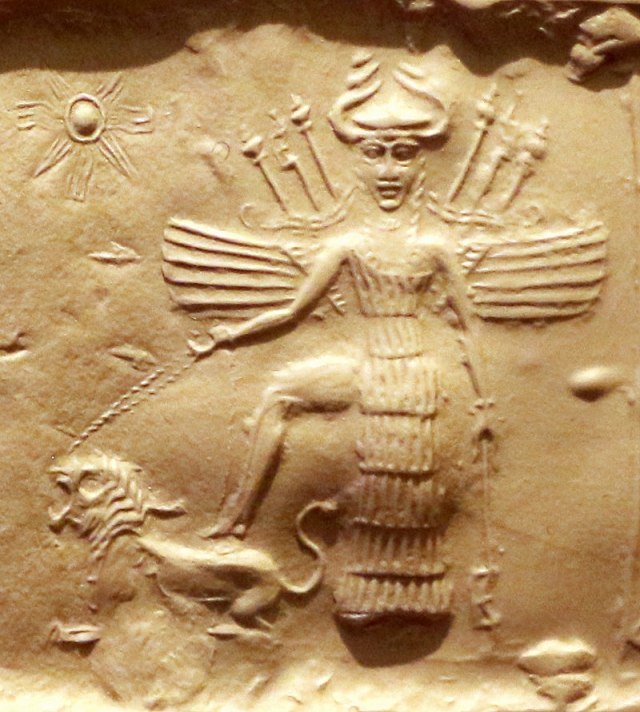 Ishtar’s emblem was an eight-pointed star. This is pure speculation on my part, but couldn’t we perhaps see the star dream of Gilgamesh as a harbinger of Ishtar’s rage and the subsequent death of Enkidu? The slaying of the Heavenly Bull by the heroes enrages the gods. The following night Enkidu has a dream of Anu, Ea and Shamash deciding that he must die. The ominous dream comes true; Enkidu falls gravely ill and perishes. 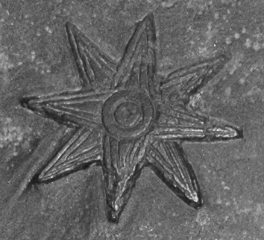 Detail of a kudurru (stele) of King Melishipak I (1186–1172 BC), showing a version of the ancient Mesopotamian eight-pointed star symbol of the goddess Ishtar (Inana/Inanna), representing the planet Venus as the morning or evening star. (via Wikipedia)

Gilgamesh falls in deep mourning. He sits by the body of his companion until a white maggot comes out of Enkidu’s nostril. He learns a bitter lesson about death: 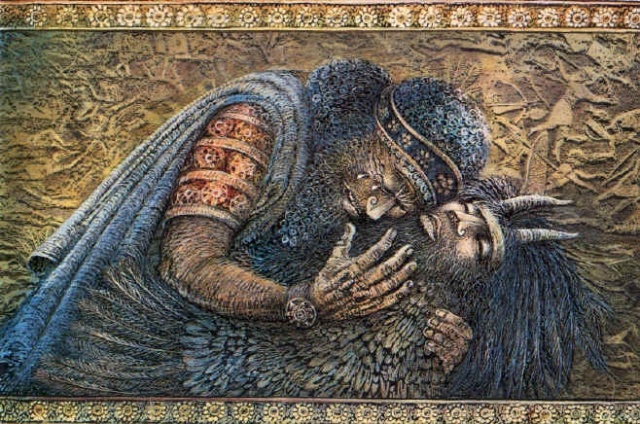 Gilgamesh decides to embark on a dangerous quest in search of Utnapishtim, whom the gods made immortal after the great flood.  Utnapishtim’s name means “he who found life.” The journey is extremely dangerous, reminiscent of the descent to the underworld. Kluger remarks that Gilgamesh starts praying to the moon god Sin to save him, forsaking the sun god Shamash for the duration of this adventure. On his way to Utnapishtim’s dwelling he meets a Scorpion-man and a Scorpion-woman, who are guardians to the mythic mountain under which the sun (Shamash) sets every night. 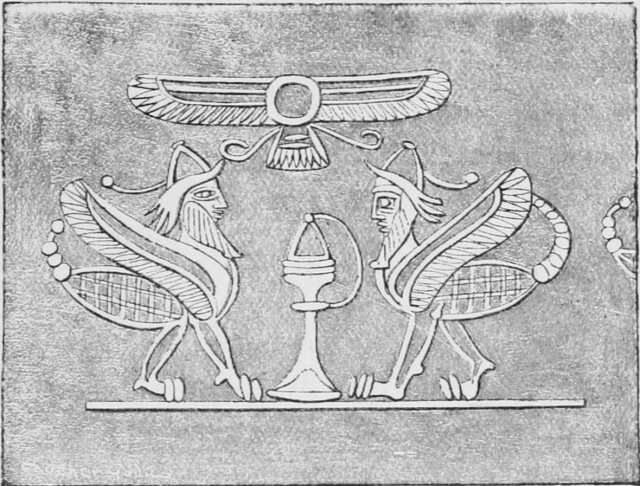 Gilgamesh wants to learn from the survivor of the flood how to overcome death. Utnapishtim tells him how to find a plant that grows under water, which will give him eternal youth. Gilgamesh manages to obtain the plant but not for long. It is seized by a serpent and returned to the depths. The hero returns to Uruk empty-handed, seemingly defeated. According to Harvard scholars, this episode demonstrates “the limits of human life between the world of animals and the world of the gods.” Gilgamesh seems to have gained wisdom which he lacked at the beginning of the story. He has touched the divine and reached immortality, if only briefly. He has experienced the human pain of loss and death. As Kluger beautifully sums up:

“He picked up his life on earth again, accepting and including death. The two-thirds god submitted to human existence, and the one-third man experienced the divine.”

Equally importantly, Gilgamesh was not only the hero of the story but also its writer. He wrote his own story down and buried it in the city walls, thus finally achieving immortality, which he had been striving for in vain. At the end of the epic, Gilgamesh reaches the status of a wise king:

“The wisdom he received at the ends of the earth from the survivor of the Deluge, Utanapishti, enabled him to restore the temples of the land and their rituals to their ideal state of antediluvian perfection.” (4) 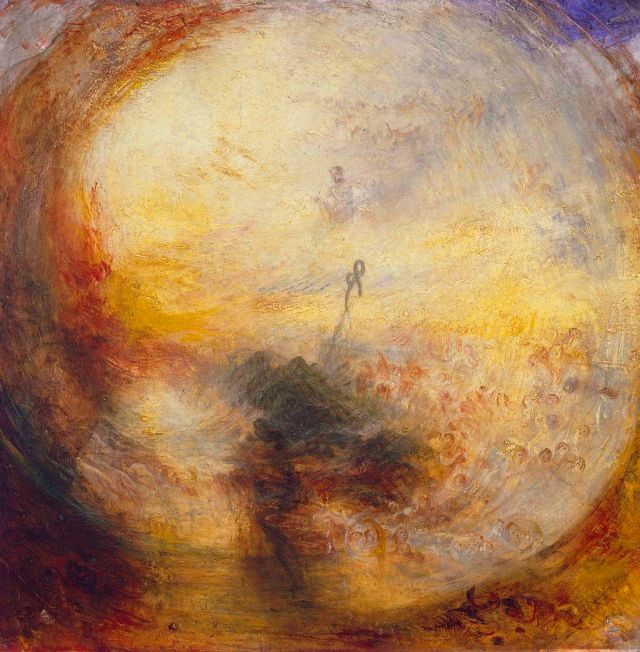 J.M.W. Turner, “Light and Colour (Goethe’s Theory) – The Morning after the Deluge – Moses Writing the Book of Genesis”

(1) The Epic of Gilgamesh, A New Translation, translated with an introduction by Andrew George, Penguin Classics 1999

(4) The Epic of Gilgamesh, A New Translation, translated with an introduction by Andrew George, Penguin Classics 1999

12 Responses to Gilgamesh: He Who Saw the Deep