Cartography of the Deep Human Psyche (6)

Having reread the whole chapter dedicated to LSD subjects reliving their own birth, once again, just like after the first reading many years ago, I feel amazed. Our coming into this world is a metaphor of the process of individuation. Consciously we do not remember any of it; the whole archetypal drama took place on the stage of our unconscious. First we float in the waters of the womb, peaceful, undisturbed and passive. We experience unity with our biological mother and a cosmic unity with the Great Mother or the oceanic waters of the collective unconscious. Our consciousness is dissolved, there is no ego. But in order to grow and to achieve consciousness we must leave the warm womb. Contractions bring about fear and anxiety: we feel extremely uncomfortable but we have nowhere to escape. If this experience is prolonged, depression sets in. But then, when all hope seems to have been lost, we notice the exit. The cervix opens and propulsion through the birth canal may begin. This marks the onset of the Basic Perinatal Matrix III, which is experienced as nothing less than a titanic struggle of catastrophic proportions. 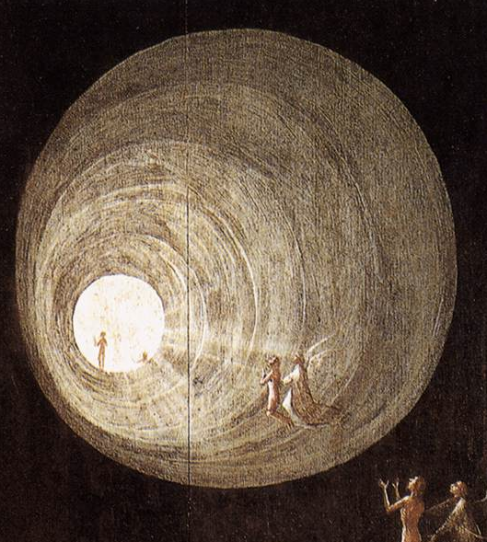 Hieronymus Bosch, Detail of Ascent of the Blessed

That painting by Bosch is lovely, but it does not show the painful unbearable tension that characterizes this stage of delivery. The metaphors used by LSD subjects to describe their feelings involved scenes of natural disasters, volcanic eruptions, atomic bombs exploding or massive air raids. 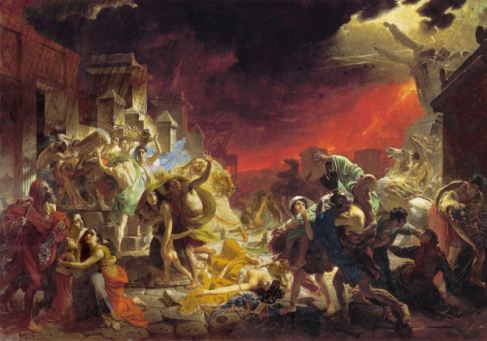 While the first perinatal matrix was about a peaceful oceanic ecstasy of the fetus safely floating in the amniotic fluid, the BMP III brings what is called volcanic ecstasy. Despite the enormous destructive energies at play, despite the immense suffering and pain, the subjects reliving this stage of delivery appear to be seized by rapture and immense pleasure.

Pain and intense suffering cannot be distinguished from utmost pleasure, caustic heat from freezing cold, murderous aggression from passionate love, vital anxiety from religious rapture, and the agony of dying from the ecstasy of being born.

Other scenes imagined by subjects reliving this matrix are even more disturbing; they include tortures, murders, executions, ritual sacrifice, suicide, the burning of heretics, the Holocaust, etc. Various cruel dictators and tyrants make their bloody entrance, and, quite disturbingly, the subjects frequently report identifying with them.

Not all subjects relive or imagine such bloody dramas; quite common for BPM III are also wild adventures, hunts, boxing matches, adrenaline sports, hazardous car races, etc. We are definitely far away from the calm waters of BPM I.

The final stage of the matrix, just before emerging from the birth canal, is characterized by scatology with the subjects reporting coming into contact with various kinds of biological and physiological material, or more symbolically with tons of garbage emitting very unpleasant smells.

One interesting aspect of the third perinatal matrix experience is the encounter with the purifying and cleansing fire. After the subjects have discovered all the dark facets of their own unconscious they literally throw themselves into the fire in order to be cleansed and purified. The Catholic purgatory comes to mind: in the fire the transgressions get burnt away. 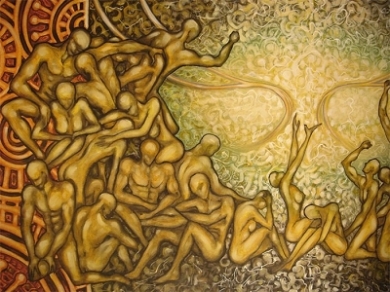 Ibrahim Savas Pekdemir, At the Purgatory

Passing through fire marks the beginning of the final Perinatal Matrix IV, which ends with the physical separation from the mother. On a symbolic level BMP IV brings the resolution of the death-rebirth struggle.

Grof’s LSD research shows that minutes before before the child draws the first breath, he or she experiences what may be called ego death. Religious and mythological images seen by subjects in that moment include Aztec sacrificial rituals (some subjects reported feeling their hearts being ripped out of their chests), the dismemberment of the Egyptian god Osiris, and, most frequently, the passion of Christ. Overcoming the agony of birth brings visions of various heroes, such as Hercules, Theseus, Perseus, etc., who have successfully overcome the forces of evil symbolized by the monster.

This is usually illustrated by a rapid sequence of images of events from his (the subject’s) ast as well as from his present life situation. He feels that he is an absolute failure in life from any imaginable point of view; his entire world seems to be collapsing, and he is losing all previously meaningful reference points.

After hitting the cosmic bottom the subject is struck by white blinding light. What follows is the expansion of space and accompanying feelings of redemption, love and forgiveness. 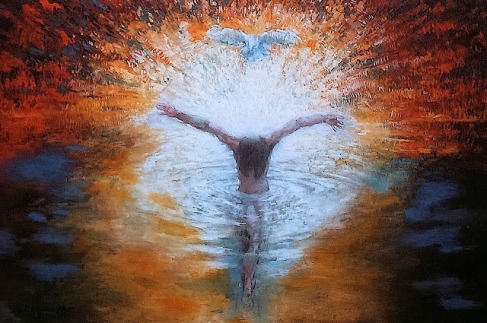 Daniel Bonnell, The Baptism of Christ

In an individual who has completed the death-rebirth sequence and stabilized under the influence of BMP IV, the feeling of joy and relief are accompanied by deep emotional and physical relaxation, serenity, and tranquility. Very characteristic of this stage are non-figurative images of God perceived as pure energy.

There are associations between birth matrices and natural phenomena. BMP II typically involves images of barren landscape, BMP III – the raging forces of nature while BPM IV usually involves post-apocalyptic scenes, visions of landscapes after the storm, calm oceans, fresh buds in the spring and – most frequently – high mountain peaks. 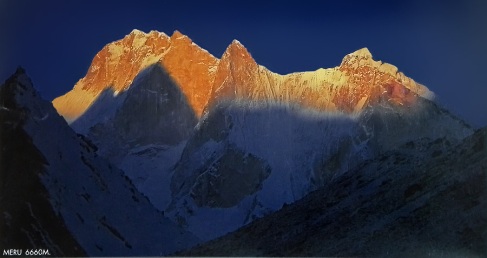 28 Responses to Cartography of the Deep Human Psyche (6)