Notes on Good and Evil

I. “Without Contraries is no progression. Attraction and Repulsion, Reason and Energy, Love and Hate, are necessary to Human existence.
From these contraries spring what the religious call Good & Evil. Good is the passive that obeys Reason. Evil is the active springing from Energy.
Good is Heaven. Evil is Hell.

All Bibles or sacred codes have been the causes of the following Errors.

But the following Contraries to these are True.

Those who restrain desire, do so because theirs is weak enough to be restrained; and the restrainer or reason usurps its place & governs the unwilling.
And being restrain’d it by degrees becomes passive till it is only the shadow of desire.

He who desires but acts not, breeds pestilence.

The pride of the peacock is the glory of God.
The lust of the goat is the bounty of God.
The wrath of the lion is the wisdom of God.
…

The tygers of wrath are wiser than the horses of instruction.
Expect poison from the standing water.
You never know what is enough unless you know what is more than enough.”

William Blake, “The Marriage of Heaven and Hell“ (extracts)

II. “(T)he very first thing to understand about evil is that what we … want to call evil, the energy of, consciousness of, was put in motion simultaneously at the very moment of the manifested creation itself. So what this then means is that what we want to call God or the Source is, itself not perfect. And again, if you want to debate such a thought, simply ask yourself a Piscean question, ‘How can a perfect anything create an imperfect anything?‘ So, in essence, the very creation point is born, relative to what we can call imperfection, and, therefore, we have the principles of duality as a direct reflection of that creation once it was set in motion. And relative to that natural law of duality – night/day – male/female – etc., we also have the natural duality in polarity of what we call good – God, and evil. It is simultaneous to the creation point.“

Jeffrey Wolf Green, “The Nature of Evil and Its Influence in the Horsocope,“ via http://schoolofevolutionaryastrology.com/school/articles/the-nature-of-evil

III. “The shadow cannot, by definition, be “integrated” in the sense that it would disappear or become unimportant. Every time one aspect of the shadow is brought to light, another part of the psyche moves into the dark. Whenever a new attitude is adopted, it is at the cost of another potential behavior that becomes part of the shadow.”

Francoise O’Kane, “Sacred Chaos: Reflections on God’s Shadow and the Dark Self“

Gustave Doré, “Lucifer Is Cast Out of Heaven” (from Milton’s Paradise Lost)

Jeffrey Wolf Green’s ideas are very close to the ones expressed by Carl Gustav Jung, who would debate with Christian theologians about the nature of God. To me, this particular aspect of Jung’s legacy is especially important. Unlike Christian doctrinarians, Jung did not see God as Summum Bonum (The Highest Good); instead, he insisted that the ultimate Divinity is a complex of opposites equal in light and shadow. In his view, the moral struggle is inextricable from life: the Shadow is not to ever be eradicated. Jung went as far as accusing Christianity of splitting off half of the opposites by calling them evil, Satan, or devil. In a letter to James Kirsch, Jung wrote that as a result of this split “the indispensable dark side has been left behind or stripped off, and the feminine aspect is missing.“ For Jung, the Holy Trinity was essentially incomplete; what was missing was the fourth part, i.e. the material, the feminine, the dark, the “evil.“ This incompleteness has impoverished the Western psyche, whereas the truth is that both poles are equally important and indispensable to life. 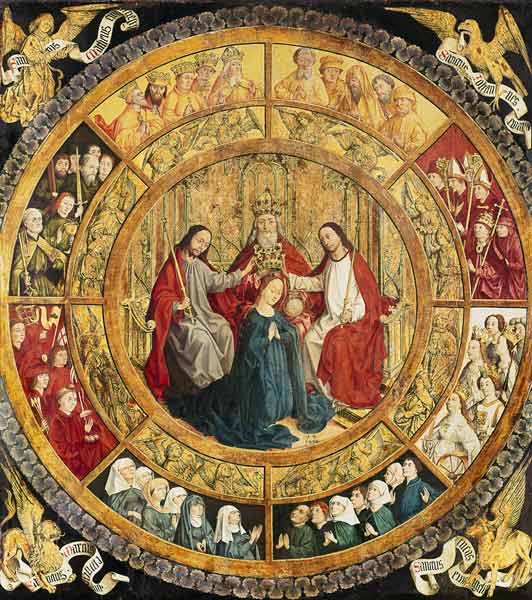 Coronation of Mary by the Holy Trinity, via http://www.repro-tableaux.com/a/handschrift-franzoesisch/le-couronnement-de-marie-1-1.html 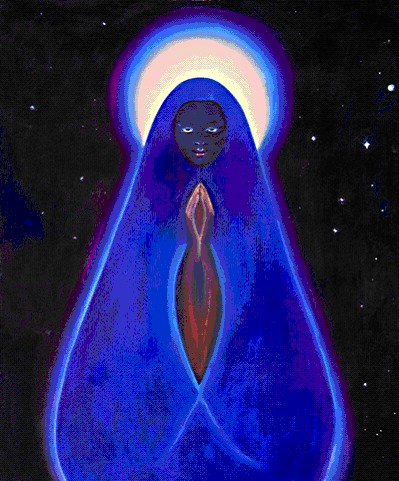 The Black Madonna by Sarah Uma

19 Responses to Notes on Good and Evil