“In Mark 4.11 Jesus says to his disciples: ‘To you has been given the secret, mysterion, of the kingdom of God, but for those outside everything is in parables.'” (1)

Fresco from Pompeii, temple of Isis (via Wikipedia)

Jung divided The Red Book into two parts: Liber Primus and Liber Secundus. With chapter XI called Resolution we reach the end of Liber Primus. This marks a pivotal moment: Jung undergoes an initiation, similar or identical to the one experienced by initiates who participated in ancient mysteries. Jung says:

“On the third night, deep longing to continue experiencing the mysteries seized me.”

There are no first-hand accounts of ancient mysteries, except one, which is to be found in The Golden Ass, a novel written by the Roman Apuleius in the second century CE. There he describes his initiation into the mysteries of Isis with these words:

“I approached the frontier of death, I set foot on the threshold of Persephone, I journeyed through all the elements and came back, I saw at midnight the sun, sparkling in white light, I came close to the gods of the upper and nether world and adored them from near at hand.” (2)

In this part of The Red Book Jung goes a step further than adoring the gods “from near at hand.” He becomes deified:

“The notion that Liber Novus both illustrates and effects a divinization process provides insight into why Jung treated The Red Book with such reverence, and why he produced it as a calligraphic illuminated manuscript, in the style of the Bibles of medieval Europe.” (3)

The steps leading to Jung’s becoming one with Christ abound in visions, the first one of which involves a battle between a white and black serpent. As a result of the conflict, part of the black serpent’s body becomes white, and finally the animals retreat to darkness and light respectively. Jung wonders if that means that darkness will be illuminated by light. Next, Elijah takes Jung to the temple of the sun and says: “This place is a vessel that collects the light of the sun.” The place reminds Jung of a Druidic temple. But then the prophet encourages Jung to follow him into the depths, through a crevice into a dark cave. Now Elijah calls himself Mime, who will show Jung the underground wellsprings, as “whoever drinks from them becomes wise.”

From the extensive footnotes provided by the editors of Liber Novus we learn that Mime was a dwarf from Wagner’s Ring of the Nibelung. He was the brother of the master craftsman Alberich, who stole the Rhinegold from the Rhinemaidens and forged a ring of limitless powers out of it. At some point the ring goes into the possession of the giant Fafner, who transforms into the dragon. Siegfried kills Fafner with a sword that Mime had forged for him. In the end, Siegfried slays Mime as well because he knows that the dwarf covets the ring above all and is ready to kill for it.

Arthur Rackham, Mime at the Anvil

It seems that the unconscious is trying to show to Jung the value of low and dark places, the wisdom of creatures like Mime, as well as the enlightening qualities of the dark serpent. In a 1925 seminar Jung indeed admitted that he was going through an internal conflict at that time, facing “a resistance to going down.”

Next, Jung has a vision of the Passion of Christ, which he finds an agonizing sight. He also sees a divine child “with the white serpent in his right hand, and the black serpent in his left hand.” This suggests the unity of opposites. But then the vision of Christ’s cross returns, and this passage comes:

” I see the green mountain, the cross of Christ on it, and a stream of blood flowing from the summit of the mountain-I can look no longer, it is unbearable-I see the cross and Christ on it in his last hour and torment-at the foot of the cross the black serpent coils itself-it has wound itself around my feet- I am held fast and I spread my arms wide. Salome draws near. The serpent has wound itself around my whole body, and my countenance is that of a lion.”

Augustus Knapp, Mithra in the Form of Boundless Time

Salome tell Jung: ” “You are Christ.”

“The serpent squeezes my body in its terrible coils and the blood streams from my body; spilling down the mountainside. Salome bends down to my feet and wraps her black hair round them.”

At that point Salome’s blindness is healed, while the prophet’s form shines like a flame. The serpent had also stopped torturing the body of Jung and wraps itself around Salome’s foot.

At the end of this initiation Jung describes his emotions:

“Salome kneels before the light in wonder struck devotion. Tears fall from my eyes, and I hurry out into the night, like one who has no part in the glory of the mystery. My feet do not touch the ground of this earth, and it is as if I were melting into air.”

In 1925 seminar Jung explained the above vision by referring to Mithraism. The Roman initiates to Mithraism referred to their God Mithra or Mithras as the invincible sun (Sol Invictus). As Dabid Fingrut explains in his fascinating essay:

Jung was referring to the figure known from the Mithraic mysteries, which is “represented with a snake coiled around the man, the snake’s head resting on the man’s head, and the face of the man that of a lion.” An initiate was, in Jung’s words, “a vessel of creation in which the opposites reconcile.”

As you may imagine, Jung has been viciously attacked for equating himself with Christ. There have been accusations of establishing his own cult, and so forth. This is perhaps why he hesitated whether to publish The Red Book. Sanford L. Drob says that in this chapter Jung “attains Christ’s powers of spiritual healing.” He experiences a union between “the spiritual principle represented by  Christ and the earthly, instinctual principle, represented by the black serpent, in order to achieve mastery as a psychotherapeutic healer of the soul.” (5) For Jung, Christ did indeed represent a symbol of individuation. Following Christ meant for him living according to one’s true essence, and furthermore, as Drob adds, “the union of opposing principles is the path to the Self.”

At the end of the chapter Jung once again addresses the issue of warring opposites, as expressed by the fight of the two serpents. He says that every individual psyche is an arena of such a war. The footnotes to this chapter contain a quote from the preface to The Psychology of the Unconscious Processes, where Jung wrote:

“The psychological processes, which accompany the present war, above all the
incredible brutalization of public opinion, the mutual slanderings, the unprecedented fury of destruction, the monstrous flood of lies, and man’s incapacity to call a halt to the bloody demon-are suited like nothing else to powerfully push in front of the eyes of thinking men the problem of the restlessly slumbering chaotic unconscious under the ordered world of consciousness. This war has pitilessly revealed to civilized man that he is still a barbarian … But the psychology of the individual corresponds to the psychology of the nation. What the nation does is done also by each individual, and so long as the individual does it, the nation also does it. Only the change in the attitude of the individual is the beginning of the change in  the psychology of the nation”

It has been suggested that the final days of the Age of Pisces have brought to the fore the extreme polarization of opposing principles. Until humans realize that the conflict lies within themselves, they will continue laying blame on one another, which Jung seems to suggest in the above quote, which sounds astonishingly contemporary.

(1) Jan N. Bremmer, Initiation into the Mysteries of the Ancient World 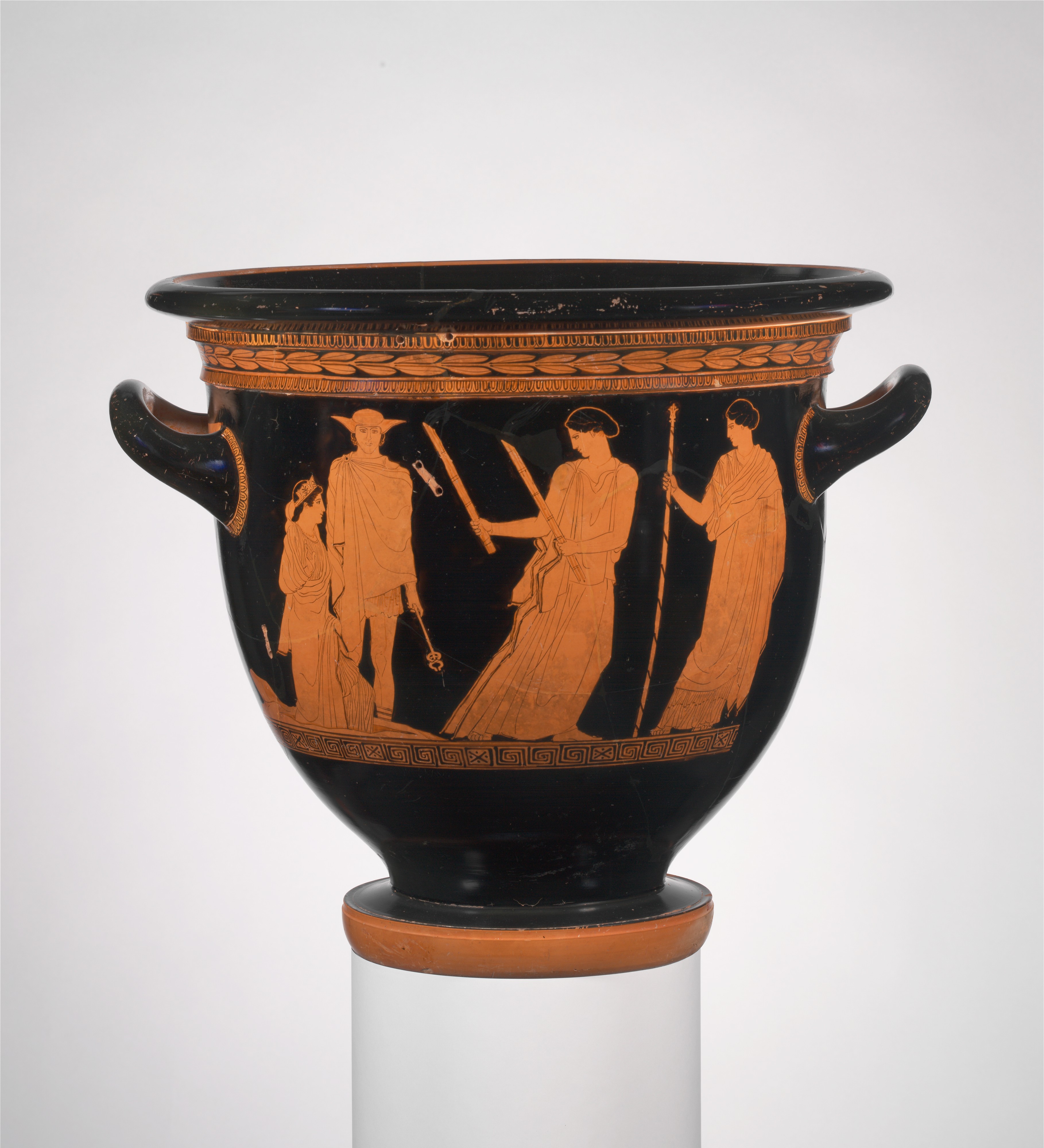 7 Responses to Reading The Red Book (13)