“The ancients lived their symbols, since the world had not yet become real for them.” 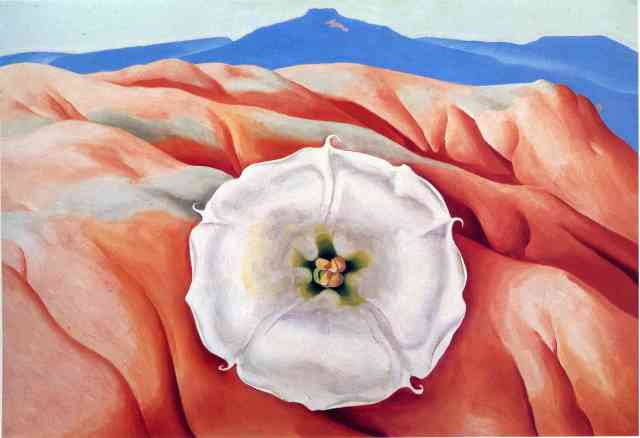 Chapter IV of The Red Book is called “The Desert.” Since ancient times, the desert has drawn mystics and visionaries, who wanted to retreat from the world to find themselves. In his Dictionary of Symbols, Cirlot described the desert as “the most propitious place for divine revelation.” The desert is also the domain of the everlasting spiritual power of the sun, at its most radiant. Jung says in this chapter that “to find their soul, the ancients went into the desert.” It was a place where “the abundance of visions” came. Jung calls them “the fruits of the desert” and “the wondrous flowers of the soul.” But these rewards are delivered only to those who survive the exposure to the cruel, arid climate there.

The soul shows Jung that his self is “a barren, hot desert, dusty and without drink.” Living too much “in men and events,” not cultivating the inner landscape, has resulted in the place of his soul being “desolate and unfruitful.” Having devoted his life to cerebral pursuits, he forgot that “no culture of the mind is enough to make a garden out of your soul.” At this point Jung realizes that the world of the soul can only be entered by he who has completely become his self, “who is neither in events, nor in men, nor in his thoughts.” The task is to direct the creative force inwards – to the place where the soul dwells. Only then will the soul become green and bear fruit. But this is a slow process. The following passage is a call for soulful authenticity, which can grant ultimate freedom to an individual:

“Nobody can spare themselves the waiting and most will be unable to bear this torment, but will throw themselves with greed back at men, things, and thoughts, whose slaves they will become from then on. Since then it will have been clearly proved that this man is incapable of enduring beyond things, men, and thoughts, and they will hence become his master and he will become their fool, since he cannot be without them, not until even his soul has become a fruitful field. Also he whose soul is a garden, needs things, men, and thoughts, but he is their friend and not their slave and fool.”

Sanford L. Drob reminds us that while creating The Red Book Jung developed the technique called active imagination, which is “a process that begins with a passive observation of images, scenes, and figures as they emerge into awareness from the unconscious, and is completed through the active engagement with them…” The desert is the right place to start the engagement with the unconscious thanks to the lack of external distractions.

Towards the end of chapter IV Jung ponders the power of words in soul making:

The meticulous calligraphy of The Red Book lends gravitas, even holiness to all the words that Jung chose. Like in stone engravings, there is little room for the non-essential. The Words thus created have enormous weight, both spiritual and material. The mysticism of language has accompanied every major religion: besides The Gospel of John quoted above by Jung, it is worth mentioning the Hindu Nada Brahma (the Sound is God) or the creative vibration of AUM. In Fundamental Symbols, The Universal Language of Sacred Science, the great symbologist René Guénon wrote:

“… the world is like a divine language for those who know how to understand it.

… if the world is the result of the Divine Word offered at the beginning of time, then nature in its entirety can be taken as a symbol of supernatural reality.”

The image accompanying this chapter shows a figure clad in white confronted with a snake in the desert. This is an echo of the image from the chapter Soul and God (part 3), which depicted a white dove and a black snake. Here the body of the snake encircles the image, as the figure steps inside the ring. Confrontation with the unconscious begins.

5 Responses to Reading The Red Book (5)