Jung on Alchemy (5): Hermes, the Arcane Interpreter of All

“Mercurius is an adumbration of the primordial light-bringer, who is never himself the light, but…who brings the light of nature, the light of the moon and the stars which fades before the new morning light.” C.G. Jung, Alchemical Studies, par. 300

“And as all things were by the contemplation of the one, so all things arose from this one by a single act of adaptation.” 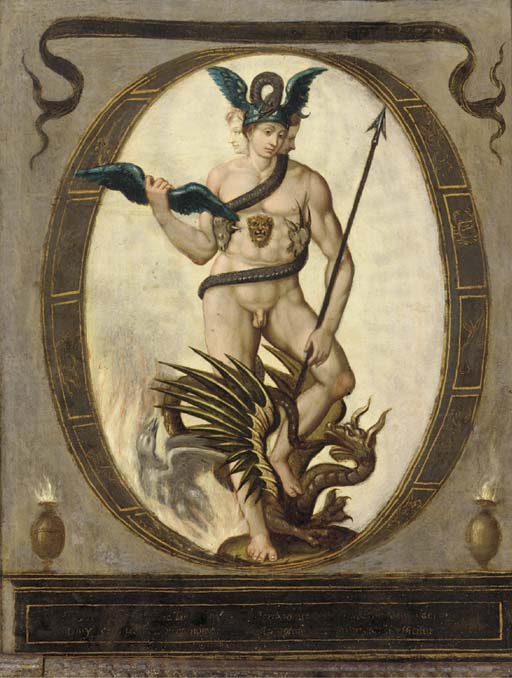 The chief figure of alchemy was Hermes/Mercurius. He was both the beginning (the prima materia), the middle (the process, the means) and the end (the philosopher’s stone – Filius Macrocosmi or the Cosmic Son) of the opus. As a symbol of wholeness, the animating principle and the world soul, he gathered all elements in himself. In Alchemical Studies Jung thus summarizes the role of Mercurius:

“The multiple aspects of Mercurius may be summarized as follows: (1) Mercurius consists of all conceivable opposites. He is thus quite obviously a duality, but is named a unity in spite of the fact that his innumerable inner contradictions can dramatically fly apart into an equal number of disparate and apparently independent figures. (2) He is both material and spiritual. (3) He is the process by which the lower and material is transformed into the higher and spiritual, and vice versa. (4) He is the devil, a redeeming psychopomp, an evasive trickster, and God’s reflection in physical nature. (5) He is also the reflection of a mystical experience of the artifex that coincides with the opus alchymicum. (6) As such, he represents on the one hand the self and on the other the individuation process and, because of the limitless number of his names, also the collective unconscious. (par. 284)

His fiery aspect was sulfurous, active and masculine, and yet invisible and working in secret. He was the fire of hell, “a rearrangement of the heavenly, spiritual powers in the lower, chthonic world of matter,” found in the centre of the earth, in the dragon’s belly (Jung, Alchemical Studies, par. 257). At the same time, he was “the universal and scintillating fire of the light of nature, which carries the heavenly spirit within it.” This fiery spiritual seed impregnated the Virgin, i.e. the feminine aspect of the hermaphroditic Mercurius. He was also synonymous with divine water, “the spirit of life, not only indwelling in all living things, but immanent in everything that exists.” (Psychology and Alchemy, par. 528) Further, he is the “great south wind,” who is both an active agent in its fiery aspect and a passive receptacle in its watery, quicksilver aspect. Jung reminds us that Hermes was originally a wind god, and so was the Egyptian Thoth, who made the souls breathe. As quicksilver, Mercurius was imagined as fluid and volatile, like water “that does not make the hands wet,” “that indefinable, fascinating, irritating, and elusive thing which attracts an unconscious projection” (Alchemical Studies, par. 257). Like the serpent of wisdom that encircles everything, Mercurius “has something of everything in herself.” (Psychology and Alchemy, par. 528). As the World Soul, the mercurial serpent was said to impart “beauty and ripeness to all things, life-giving power like a glue, holding the world together and standing in the middle between body and spirit” (Alchemical Studies, par. 263). He was present when the world was created; his role was to impregnate the waters with the seed of life. Although he bore the light that filled the whole world, he remained hidden and worked in secret. 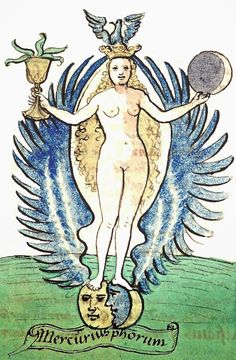 A question arises whether the alchemical Mercury ties in with the Greek Hermes and his Egyptian counterpart, Thoth. Very much so, but we need to dig deeper than the conventional descriptions of the nimble footed messenger of the gods, the god of merchants and thieves. Hermes is both young and old, or perhaps he defies time, as his beginnings are untraceable. In Women’s Encyclopedia of Myths and Secrets by Barbara G. Walker, we can read that Hermes, god of magic, letters, medicine and occult wisdom, was “one of the Aegean Great Mother’s primal serpent-consorts, partaking of her wisdom because he was once a part of her.” Hermes and Aphrodite begot a child together – Hermaphroditus – or alternatively, according to some occult understandings, they were one god – a symbol of unity. 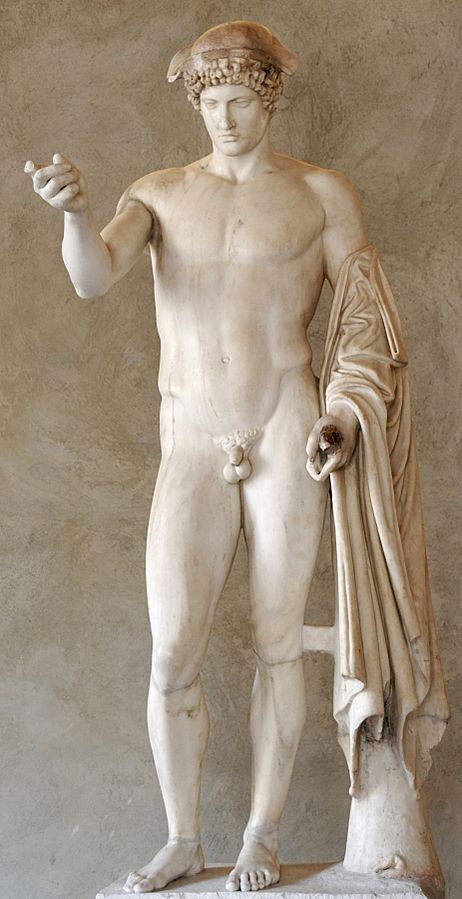 In Greek myth, his mother was Maia, the oldest and the most beautiful of the Pleiades. Her name can be linguistically traced to “mother” and the Sanskrit name Maya, mother of the Buddha, goddess of creation and manifestation, says Munya Andrews in her wonderful book The Seven Sisters of the Pleiades. One of Hermes’s first inventions was the seven-string lyre, which symbolically connects to seven divine sounds that are the source of creation and the foundation of cosmic order. Madame Blavatsky claimed that the Pleiades, together with the stars of Ursa Major, control cycles of time and destiny. Also Hermes, as the guide of souls in his union with the Great Goddess, ruled over death and rebirth. In his incarnation as Hermes Trismegistus, he was the “creator of civilization, responsible for medicine, chemistry, writing, laws, art, astrology, music, magic, rhetoric, philosophy, geography, mathematics and much more,” to quote Gary Lachman from his book The Quest for Hermes Trismegistus. Hermes was both celestial and terrestrial, and so hermetic wisdom connects what is above with the plane of manifestation lying below. In Phrygia and Samothrace he was worshiped as a phallic deity and part of the trinity with Mother Earth and father Hades. The phallic stone pillars with the head of Hermes, called herms, used to protect crossroads all throughout the Greco Roman world. Also among the Saxons Hermes was closely connected to the Mother Earth and the phallic principle, as Barbara G. Walker summarizes:

“Saxons worshipped Hermes as the phallic spirit of the Hermeseul, or lrminsul, planted in the earth at the Mother-mount of Heresburg (Hera’s Mount). It is now known as Eresburg, and a church of St. Peter stands where Hermes’s ancient sanctuary united the phallic principle with Mother Earth. Other Germanic tribes worshipped Hermes under the name of Thot or Teutatis, “Father of Teutons.” Hermes-Mercury was the same as the Germanic father-god Woden, which is why the Hermetic day, Wednesday, is Woden’s Day in English but Mercury’s Day in Latin languages.”

The number four was especially sacred to Hermes. He was the liminal god of the crossroads (and thus of all boundaries, which he was allowed to cross with no restrictions), the four elements, the four seasons, the cardinal cross, the cross of incarnation (of spirit into matter). The astrological symbol of Mercury is a circle (spirit) with a cross of matter, which is an expression of Logos, i.e. the word of God made flesh, crowned by a lunar crescent, tying him to the goddess. 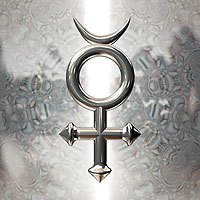 Every god, like every archetype, had an ominous shadow side, and so did Mercurius. In Alchemical Studies (par. 303) Jung warns that Hermes comes as the lumen naturae (light of nature) only to those who are mindful and vigilantly strive towards it, while for many the same light “turns into a perilous ignis fatuus [foolish fire, an illusion], and the psychopomp into a diabolical seducer.” He is, after all, the son of Maya, a great goddess of Illusion. In an Orphic Hymn, Hermes is called “the Interpreter of All.” There is indeed a real danger connected with Mercurius, which is being caught in the web (Maya) of lies, sleek word propaganda disguised as the ultimate truth. As Nietzsche ironically put it in “On Truth and Lie in an Extra-moral Sense”:

“truths are illusions about which one has forgotten that this is what they are; metaphors which are worn out and without sensuous power; coins which have lost their pictures and now matter only as metal, no longer as coins.”

As we engage in interpreting messages constantly coming to us from within and without, we would be wise to remember that truth is not fixed or constant but it is always shifting with quicksilver speed. The Greek word for truth is alétheia, which means un-concealing. Truth is hidden, concealed, elusive, always somewhere “out there.” Un-concealing the veils of Maya means embodying and manifesting that which lies as a potential in the depths of the individual psyche. Perhaps it can be uncovered only by “the meditation of the One,” to quote once again from the Emerald Tablet of Hermes Trismegistus. 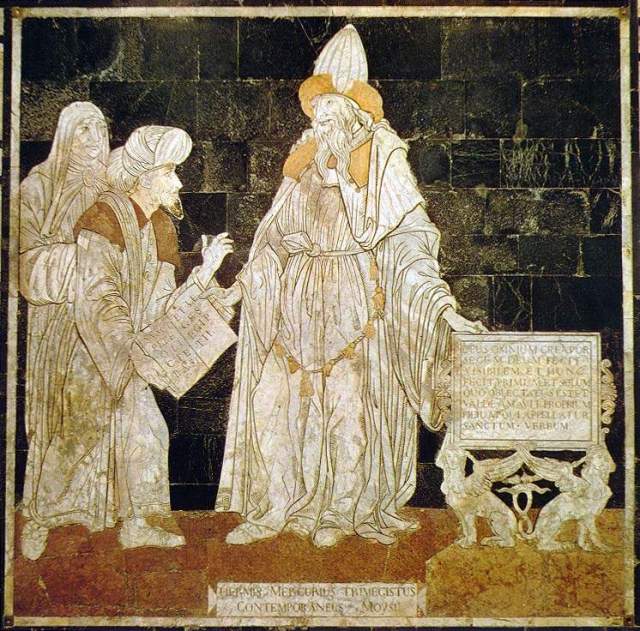 Hermes Trismegistus of the Siena cathedral

13 Responses to Jung on Alchemy (5): Hermes, the Arcane Interpreter of All