Ancient Roots of the Symbol 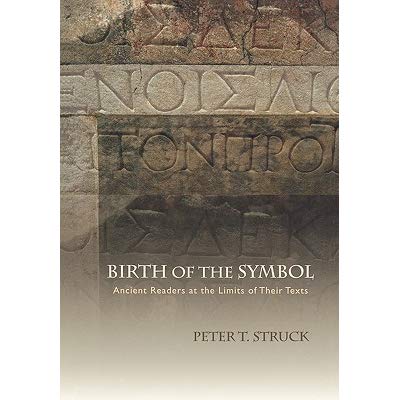 The book Birth of the Symbol: Ancient Readers at the Limits of Their Texts by Peter T. Struck, published in 2004 by Princeton University Press, traces the ancient origins of the concept of a symbol. The author has this to say about the first occurrences of the word “symbol”:

“In its earliest instances, the Greek word… [symbolon] … has nothing to do with figurative or suggestive language. Formed of the verb… (put together), a symbol is one half of an object – usually a piece of cloth, wood or pottery – that is deliberately split in two and then allocated to the parties to an agreement. It is reassembled at a later time to verify the deal.”(p. 78)

However, already in Plato it can be noticed that the meaning of the symbol has evolved beyond its original material sense. Plato’s dialogue Symposium contains a myth about a proto-human, who at the beginning had four legs, four arms and four faces. This, however, threatened Zeus, who cut the creature in half. Plato writes:

“Then each of us is a symbol of a human, since we have been cleaved just like flatfish, two generated from one. So each person forever searches for the symbol of himself. (quoted after Struck, p. 79)

Thus, the meaning of the word “symbol” encompasses “both lack and potential wholeness;” (p.79), while it simultaneously creates desire, which is a result of want.

At the same time, i.e. around 300 B.C.E., the word symbol was used to signify a sort of token or password to authenticate and allow entry. It was used like this by soldiers and also by members of secret cults, notably by the Pythagoreans. It was a mark of secret identity, not open to all (p. 81). Thus, it created a feeling of community.

Further, the symbol was used very prominently in divinatory context. Omens were treated as signs left by the divine to interpret. “The omen provides our earliest secure attestation of a symbol that is an interpretable enigma,” says Struck (p. 96).

In addition, the word “symbol” carried with it the notion of “a coincidental meeting,” for example when a tortoise fell into the path of a newly-born Hermes, this auspicious encounter was called “a symbol” in the Homeric hymn to Hermes. While reading this, I was reminded of Jung’s concept of synchronicity interpreted as a “meaningful coincidence.”

Struck moves on to discuss the enormous importance of the symbol for the Neoplatonists – Porphyry, Iamblichus and Proclus. For Porphyry, the symbol was “a point of intersection between divine and mundane realms.” (p. 218). In his essay “On the Cave of the Nymphs” he refers to the cave from Homer’s Odyssey as “a symbol.” For Iamblichus, the symbol is also “the central link between the divine and human realms, …, the node on which the transcendent can meet the mundane.” (p. 213). The Neoplatonists were inspired by a passage of the Chaldean Oracles, which said that the Nous or the mind of God “sowed secret symbols throughout the universe.” (p. 216). In order to evoke the presence of the gods in the human realms, “the earliest theurgists saw themselves as gathering these divine seeds (i.e. in the form of certain stones, herbs, gems, plants, etc.) in theurgic ritual.” (p. 216).

The theme of the divine communicating with humans by means of symbols is also pervasive in Corpus Hermeticum. The invisible divine principles are made visible by means of symbols. The One exists beyond ordinary language and thought, which means that symbols are our only chance to grasp the vital message of the divine realm. In symbols dwells divine presence, which gives them the power they have. Not only do symbols transform the practitioner, but they also raise him or her “to higher spiritual levels.” (p. 224)

According to another Neoplatonist – Proclus, the rays sent by the One penetrate down through the immaterial to the material realm. Struck offers a clear example of this emanation of symbolism:

“One ray, or chain, laves the transcendent heights of the One and manifests itself, very near its source, as the traditional Greek god Apollo. When this same ray continues downward and enters the realm of Nous, it brings into being the Platonic Form of the sun. At the level of Soul, the beam manifests as sort of sun-soul… Next … the beam brings into being the actual physical sun that we see in the sky. … [at the mineral level] it appears as gold.” (p. 231)

Thus the One has left its impressions on every existing thing. The divine signs, symbols, seeds or sunthemata, are visible all around us, even in the basest material things.

Symbolism is a golden thread that oscillates between spirit and matter. An old Greek meaning of sumbola was “the confluence of the waters,” a place where various rivers, streams and other waterways meet and flow together. (1) Through symbols we gain access to the creative and nourishing watery source of life. It is symbols which bring together (Greek sumballen – throw together) seemingly disparate cultural currents. When we realize that the One permeates All, we can notice symbolic connections that reach far and wide, beyond any kind of artificial borders and dualities. In Alchemical Studies, Jung spoke of “the living truth” of the symbols and their liberating quality:

“The protean mythologem and the shimmering symbol express the processes of the psyche far more trenchantly and, in the end, far more clearly than the clearest concept; for the symbol not only conveys a visualization of the process but—and this is perhaps just as important—it also brings a re-experiencing of it, of that twilight which we can learn to understand only through inoffensive empathy, but which too much clarity only dispels.”

It seems that we can notice how the ancient understanding of the symbol as two parts coming together resurfaces in the idea of the symbol acting as a link between psyche and matter, the above and the below. The symbol seems to obliterate dualities in a display of One Wisdom.

(1) Rene Alleau, The Primal Force in Symbol: Understanding the Language of Higher Consciousness

2 Responses to Ancient Roots of the Symbol