The Secrets of the Odyssey (10): Return to Ithaca through the Cave of the Nymphs

“When on the East the sheer bright star arose

that tells of coming Dawn, the ship made landfall

and came up islandward in the dim of night.

Phorkys, the old sea baron, has a cove

here in the realm of Ithaka; two points

of high rock, breaking sharply, hunch around it,

making a haven from the plunging surf

that gales at sea roll shoreward. Deep inside,

There, on the inmost shore, an olive tree

throws wide its boughs over the bay; nearby

a cave of dusky light is hidden

for those immortal girls, the Naiadês.

Within are winebowls hollowed in the rock

and there are looms of stone, great looms, whereon

as the deep sea is; and clear springs in the cavern

one on the north allows descent of mortals,

but beings out of light alone, the undying,

can pass by the south slit; no men come there.”

While Odysseus is sleeping serenely, the Phaecian ship lands on the shore of Ithaca and leaves the hero there. After long trials and tribulations “the seer or shaman returns home from his vision quest,” as scholar Gregory Nagy put it. Venus, the Morning Star, shines to herald his low-profile return when the Moon is dark and midwinter cold chilling to the bone. In symbolic terms, the hero’s journey resembles that of the Sun, which in the northern hemisphere is reborn at winter solstice. In his book The Ancient Greek Hero in 24 Hours, Nagy devotes a lot of space to analyzing the Greek word “nostos,” whose meaning comprises “return, homecoming; song about homecoming; return to light and life, immortalization after death.” He dwells on the mystical meaning of homecoming understood as returning to consciousness: emerging to light after being enveloped by darkness. Closely related to “nostos” is “noos,” the word which means “mind, thinking, perception, intuition, consciousness”:

According to Nagy, The Odyssey is a story of a soul’s journey and its return to light and life from darkness and death. On coming to Ithaca, the hero needs to gain his status back and retrieve his old identity as king. During the twenty years of his homeward journey his social standing has been reduced to nothing: you may recall how already in the cave of Polyphemus Odysseus had called himself a Nobody. His identity at the beginning of the Odyssey could be summarized as “a hero from Troy,” but that identity was relinquished in the cave of the Cyclops. By relinquishing the power of his ego, Odysseus had gained a new kind of power bestowed on him by his divine mentor – the goddess Athena, who reveals herself to him after he lands on Ithaca and acknowledges that she and Odysseus are equals now:

contrivers, both. Of all men now alive

you are the best in plots and story telling.”

Athena dispelled the mist she had covered sleeping Odysseus with and revealed the beautiful island of Ithaca to him. They proceed to hide the treasure he had brought from Phaecia in the Cave of the Nymphs and work out the strategy of gaining back the kingdom by vanquishing the suitors. To that end, Athena disguises Odysseus as a beggar:

“Speaking no more, she touched him with her wand,

Shriveled the clear skin of his arms and legs,

made all his hair fall out, cast over him

the wrinkled hide of an old man, and bleared

both his eyes, that were so bright. Then she

clapped an old tunic, a foul cloak, upon him,

and over that a mangy big buck skin.”

Before Odysseus proceeds to execute the master plan he spends a considerable amount of time in a cave with the goddess. Previously, as you may recall, he had spent a lot of time in a cave with the goddess Calypso. It seems that the symbolism of caves as places of initiation is crucial for the hero’s journey in the Homeric epic. The significance of the Cave of Nymphs is revealed brilliantly by the Neoplatonic philosopher Porphyry in his essay “On the Cave of the Nymphs.” The cave for Porphyry is a symbol of the world and mundane powers, especially the invisible, occult powers:

“a cave is a symbol of the sensible world because caverns are dark, stony, and humid; … the world is a thing of this kind, through the matter of which it consists, and through its repercussive and flowing nature.”

The Cave of the Naiades (water Nymphs) is a place where souls descend into generation: “souls descending into generation fly to moisture.” As Heraclitus wrote, “moisture appears delightful and not deadly to souls; but the lapse into generation is delightful to them.” All souls, therefore, “are profoundly steeped in moisture ” as “the spirit becomes moist and more aqueous through the desire of generation.” In the Cave, Naiades are busy weaving, which for Porphyry means that they are clothing the souls in corporeal energies: 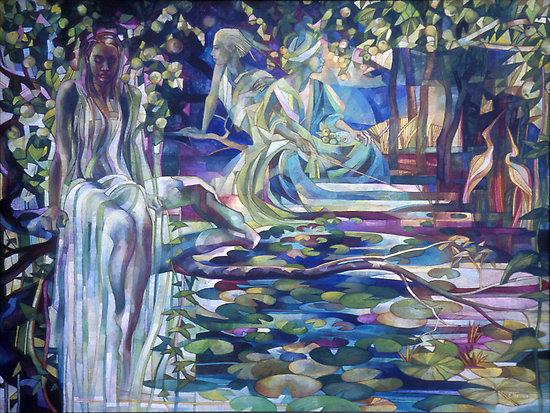 “For the formation of the flesh is on and about the bones, which in the bodies of animals resemble stones. Hence these instruments of weaving consist of stone, and not of any other matter. But the purple webs will evidently be the flesh which is woven from the blood. For purple woolen garments are tinged from blood and wool is dyed from animal juice. The generation of flesh, also, is through and from blood. Add, too, that the body is a garment with which the soul is invested…”

Another potent symbol in the Cave of the Nymphs are the amphorae filled with honeycombs. Honey is a substance which is both cathartic and preservative, its sweetness is “indicative of the pleasure which draws souls downward to generation. “ Barbara G. Walker saw honey as a symbol of the feminine potency of nature, the life-giving feminine fluid that in some ancient rituals was combined with menstrual blood to obtain the elixir of life.

The two entrances to the cave are also deeply significant. According to Porphyry, the northern entrance to the cave is the tropic of Cancer, the southern one – the tropic of Capricorn. Roger Sworder asserts that with such symbolism ”this Ithacan cave is symbolically transformed into the whole earth. In the Odyssey, as Sworder elaborates “the southward path leads to mortal death, the northward path to immortality.” Cancer, a water sign, is associated with descending into generation while the sign of Capricorn – the goat ascending rocky mountains – is the gateway to the heavens. Thus, Odysseus’ and Athena’s passage through the southern entrance of the cave brings his second birth and spiritual rebirth.

Carl Gutherz, “Light of the Incarnation”

The final symbol analyzed by Porphyry is the olive tree placed next to the Cave of Nymphs. The cave, like the heart, is a symbol of a deeply hidden spiritual centre and the point of communication between higher and lower realms, as Rene Guenon points out. The olive tree, whose oil was used to feed lamps, was sacred to Athena and symbolized the light of divine wisdom. According to some traditions, as cited by Rene Guenon, the Tree of Life in Eden was an olive tree. For Porphyry, it was the plant of wisdom sacred to the goddess who was born from the head of Zeus, which for him suggests that “the universe is not the effect of a casual event and the work of irrational fortune, but that it is the offspring of an intellectual nature and divine wisdom.” Olive is an ever-flourishing tree associated with boundless fertility: in the summer its leaves turn upwards, in the winter they are bent downwards.

I must admit the verses describing the Cave of the Nymphs are my favourite in the whole Odyssey. I see this passage as the Epiphany of the deepest mysteries of Creation. One cannot imagine a more auspicious or miraculous homecoming than the one lyrically depicted by Homer.

Porphyry, “On the Cave of the Nymphs” http://www.tertullian.org/fathers/porphyry_cave_of_nymphs_02_translation.htm

11 Responses to The Secrets of the Odyssey (10): Return to Ithaca through the Cave of the Nymphs