The Secrets of the Odyssey (6): the God of Winds

In the fourth month of his journey, Odysseus, guided by friendly winds, reaches the kingdom of Aeolia, where the god of winds Aeolus resides with his family: wife and twelve children. Homer depicts it as a rectangular island, which brings to mind the constellation of Gemini. Indeed, the Sun is in Gemini during this adventure.

“The rectangular island can also be perceived as the bed in which Aeolus and his wife and family of 12 children sleep warm and snug under the blanket of the Milky Way.” 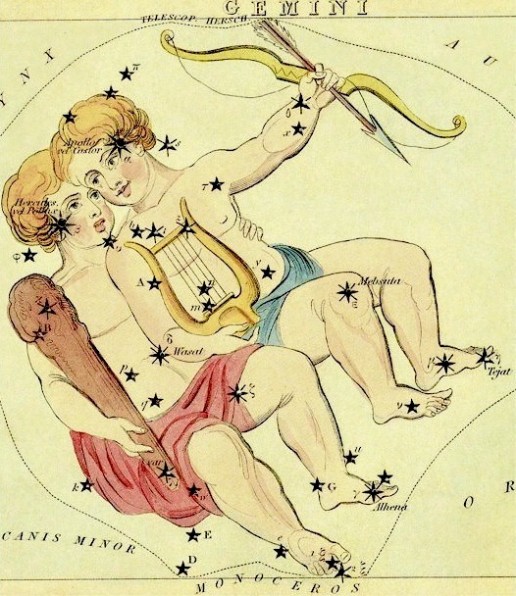 The constellation of Gemini has an old connection with windy and stormy weather. The two twins, Castor and Pollux, were put in heavens as a reward for protecting the ship Argo from violent storms during the quest for the Golden Fleece. In ancient Greece, the twins were believed to bring good luck to sailors. This is how Odysseus retells this adventure:

one full month to hear the tale of Troy,

the ships and the return of the Akhaians,

all which I told him point by point in order.

When in return I asked his leave to sail

and asked provisioning, he stinted nothing,

adding a bull’s hide sewn from neck to tail

for Zeus had long ago made Aiolos

warden of winds, to rouse or calm at will.

He wedged this bag under my afterdeck,

so not a breath go through; only the west wind

he lofted for me in a quartering breeze

to take my squadron spanking home.”

The whole stay on the island was very auspicious and pleasant for Odysseus and his crew. Why would the god of winds go out of his way to help Odysseus? Why would he give him a sack containing all the contrary winds except for Zephyr, a gentle western wind which will guide the hero to Ithaca? I think this short episode offers important clues regarding Odysseus’ personality. The symbolism of the sign Gemini is heavily pronounced in this part: Odysseus spends the whole month talking to Aeolus about his adventures, the whole island is not fixed but keeps moving, being a floating island. Winds are naturally connected with the element air, and the airy sign of Gemini, ruled by Mercury, is associated with short journeys, movement, communication, conversation and intelligence. The quick-witted, easily-lying Odysseus, the cleverest trickster, the smartest strategist is, at least the way I see him, an epitome of Gemini. His endless curiosity spurs him on and on, making him lose his cautiousness to look in every cave, every nook of each island he visits to satisfy his endless quest for new vistas and new experience. It takes one to know one, and Aelous recognized these qualities in Odysseus, making him a guest of honour on Aeolia. Dane Rudhyar, in his book Zodiac as the Universal Matrix, says this about the sign Gemini:

“The scatteredness of the Gemini type has often been over-emphasized. It is scatteredness only if the person does not succeed in finding the synthesizing factor, the God-seed, the guru, the “program” – through which his seemingly roundabout flight finds a direction and a purpose. … Without it, his stirrings become aimless wanderings. … The axis must be either rooted an old and secure tradition which the Gemini person fulfills (as was Dante – a strong Gemini type); or else it must be the all-powerful pull of an envisioned goal drawing the mind, as the strong vacuum at the centre of the tornado or twister draws all that is found on its path (Walt Whitman path).

At any rate it is essential for the person born with the Sun in Gemini to realize that his life normally progresses in a spiral motion. He must learn to understand cycles and to go over and over again the same things; but actually the repetition should be each time at a higher or deeper level. Gemini energy is associative energy – energy generated by relationship, by finding new ways of relating things and principles. … At the same time, the Gemini force moves one to seek escape from earth-bondage … and at times from normal biological instincts.”

Aeolus hid the winds he gifted Odysseus in a bull’s hide, alluding to the previous phase of the Zodiac, Taurus and neatly transiting to the sign of Gemini, which is associated with the winds. Odysseus and his companions sailed peacefully towards Ithaca, which appeared on the horizon at the moment when the Sun entered Cancer, the sign associated with home, among its other meanings. Unfortunately, the relieved Odysseus fell asleep at this point and his companions, who had not been informed about the contents of the bag, opened it because they suspected it contained a treasure. A violent storm ensued and blew their ships far, far away from Ithaca. When Odysseus awoke he was in such deep despair that he pondered suicide. But he endured, covered himself and lay down on the bottom of his ship in quiet despair.

“Here are his most marked traits of character and his odyssean modus vivendi in capsule form: endurance and hiding.”

There is more to Odysseus than just endurance and hiding. These qualities are means to a much more important end, which will be revealed in the next crucial part dedicated to the goddess Circe and Odysseus’ visit in the Underworld. These two episodes are pivotal for the Odyssey, for they endow our hero with the program, direction and purpose of his quest, for Odysseus was indeed like Dante to the Greeks. 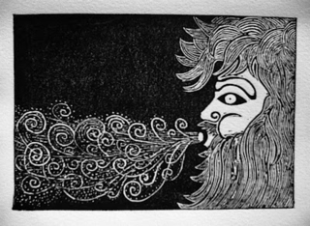 17 Responses to The Secrets of the Odyssey (6): the God of Winds