The Secrets of the Odyssey (11): Death of Odysseus, Master of Land Ways and Sea Ways

Having emerged from the Cave of the Nymphs, while the Moon is still in its dark period and the Sun stands still at Winter Solstice, Odysseus hides away in the hut of a pig-keeper Eumaeus.  As a master of suspense, Homer makes us wait for a long time before Odysseus’ closest ones can recognize him and celebrate a sweet reunion with him. The drums are rolling louder and louder as Odysseus is staging his grand return. While the Cave of the Nymphs was symbolic for the unseen creative powers of the Universe, the pig farm stands for the visible universe as known to Homer. As Kenneth and Florence Wood describe it in Homer’s Secret Odyssey: 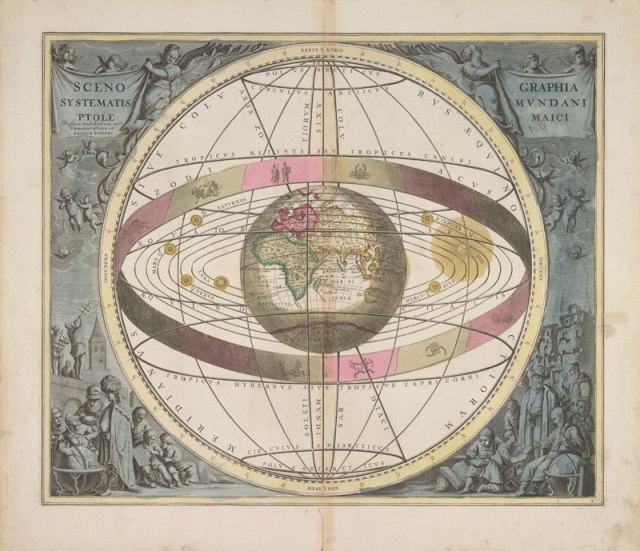 “A hut in a high clearing or yard with a wide view and the boundary of the clearing marked by a wooden fence ‘in a full circle.’ … Within the yard are 12 pigsties, each containing 50 sows, and beyond the fence are 360 boars guarded by four savage dogs trained by Eumaeus.

Eumaeus’ house = the earth at the centre of the universe.

A lofty enclosure and view on all sides  = the dome of the heavens.

Posts in a ‘full circle’  = the ecliptic, the apparent path of the sun during the course of the year.

12 pig pens  = the 12 zodiacal constellations through which the sun appears to pass during a year.

It is not coincidence that Homer is specific about the gender of the pigs on the farm, for the boars are related to solar data but the sows are related to lunations. In each of Eumaeus’ pens are 50 sows and each one represents one lunation.” 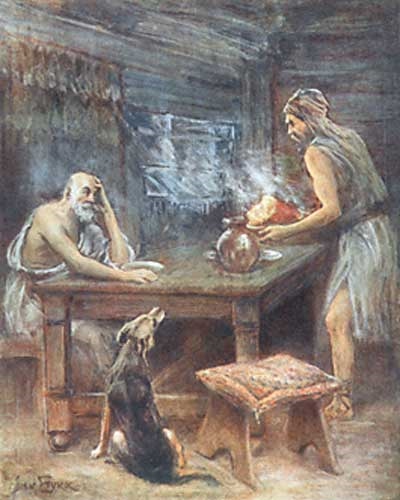 It is in Eumaeus’ farm that Odysseus reunites with his son Telemachus, uttering these moving words: “I am that father whom your boyhood lacked and suffered pain for lack of. I am he.” 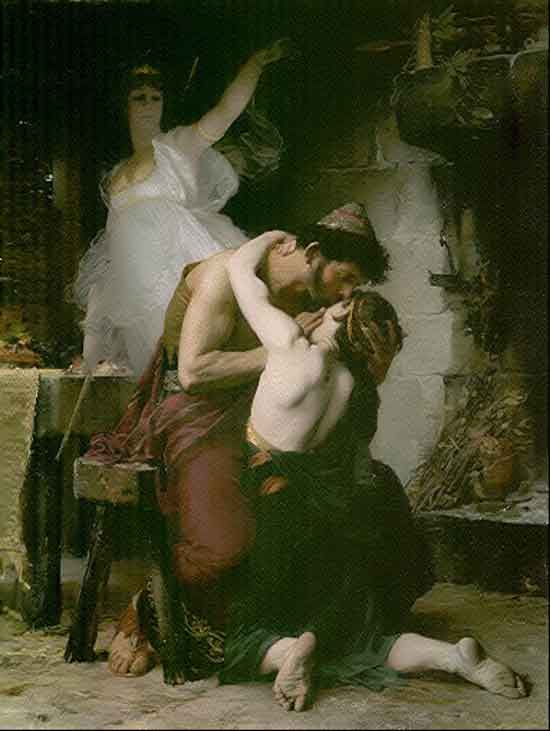 After a reunion with the faithful servant and his son, Odysseus, still in disguise as a beggar, travels to the palace. Nobody recognizes him but when the nurse Eurycleia, who had known him since his boyhood, washes his feet, she notices a scar that looks like a curved white tusk. The scar was left by a wild boar during a hunting expedition to Mount Parnassus when Odysseus was a young prince. She is moved to tears but vows to keep his secret safe even from Penelope. The shape of the scar reminds that the new moon is imminent. When we realize that Parnassus is the mountain sacred to Apollo and the Muses, this incident from Odysseus’ youth suddenly rises in prophetic and symbolic significance: the hero will reach the summit of Mount Parnassus as Greece’s last mythical hero and a master story teller but he will forever bear a scar as an emblem of his suffering. Interestingly, wild boars were animals offered in goddess sacrifice, notably to Astarte in Syria and Demeter in Greece:

“Myths of dying gods like Tammuz, Attis, and Adonis featured the boar, or boarskin-clad priest, who sacrificed the god in swine form. …  As lovers of the Goddess, they were chosen from members of her priesthood. …  Some myths said Attis died in the same way as Adonis, being gored by a boar. Others said Attis himself was the boar, a totemic sign of his kingship.”

Image of Goddess Ceres with a wild boar

Thus, Odysseus’ scar is a sign of him being a sacrificial king bound to the goddess. As the New Moon finally appears, Odysseus proves his mastery at archery by killing the suitors, and, to quote the Woods, “to mark the coming together of the sun and moon he fires an arrow (the sun) through a line of 12 axe-heads, representing the months of a lunar year. As the new moon appears in the evening sky it marks the coming together of the sun and moon after 19 years.” Odysseus’ act may bring about war but goddess Athena prevents it. On the second day of the new lunation – the final day of the Odyssey – Odysseus meets his father, Laertes, and Athena restores peace between Odysseus and relatives of the slain suitors. As the Woods notice, “the lunar and solar calendars are at that moment in harmony at the beginning of both a new calendar year and a new 19-year cycle of the sun and moon.” For me, by far the most moving moment of the grand finale of the Odyssey is Odysseus’ reunion with Penelope:

“Now from his breast into his eyes the ache

of longing mounted, and he wept at last,

his dear wife, clear and faithful, in his arms,

as the sunwarmed earth is longed for by a swimmer

spent in rough water where his ship went down

under Poseidon’s blows, gale winds and tons of sea.”

During their long night of love (extended by divine powers of Athena) Odysseus tells Penelope about his adventures. She learns that they are not going to die side by side because his final adventure awaits him, as prophesized by Teiresias during Odysseus’ sojourn in Hades:

“But after you have dealt out death—in open

combat or by stealth—to all the suitors,

go overland on foot, and take an oar,

until one day you come where men have lived

and oars that fledge light hulls for dipping f light.

The spot will soon be plain to you, and I

can tell you how: some passerby will say,

“What winnowing fan is that upon your shoulder?”

Halt, and implant your smooth oar in the turf

a ram, a bull, a great buck boar; turn back,

and carry out pure hekatombs at home

to all wide heaven’s lords, the undying gods,

to each in order. Then a seaborne death

soft as this hand of mist will come upon you

when you are wearied out with rich old age,

your country folk in blessed peace around you.

And all this shall be just as I foretell.”

In The Ancient Greek Hero in 24 Hours, Gregory Nagy writes that the verses of the prophecy point to the hero’s death and to the mystical vision of his tomb, where he will be worshiped as a cult hero. At the moment of Odysseus’ death he is going to experience what Carl Jung called “a coincidence of opposites,” through which the sea and its negation – the land – will become one:

Nagy proclaims that the enmity between Odysseus and Poseidon is ended here because “god-hero antagonism in myth … corresponds to god-hero symbiosis in ritual.” Having achieved heroic consciousness (noos) through his travels, Odysseus dies sending two clear messages: “1) the seafarer is dead 2) the harvest is complete.” The corpse of the hero will bring fertility to the land that worships it while the tomb of the hero as a place of cult has an extraordinary symbolic meaning. Nagy, a Greek scholar who rejoices in etymology, focuses on the Greek word “sema,” which comprises the following in its meaning: ‘sign, signal, symbol; tomb, tomb of a hero.’ It turns out that for the ancient Greek mind there is no meaning and no symbolism without the cult of a hero:

“The key word for this hour is semainein, which means ‘to mean (something), indicate (something) by way of a sema. … the very idea of ‘meaning’ in the ancient Greek language is tied to the idea of the hero – in particular, to the idea of the cult hero’s death and tomb. It is as if ‘meaning’ could not be ‘meaning’ without the hero’s death and tomb. And such heroic ‘meaning’ is tied to the further concept of the hero’s consciousness after death – a consciousness that communicates with the living.”

Statue of Odysseus on Ithaca

15 Responses to The Secrets of the Odyssey (11): Death of Odysseus, Master of Land Ways and Sea Ways